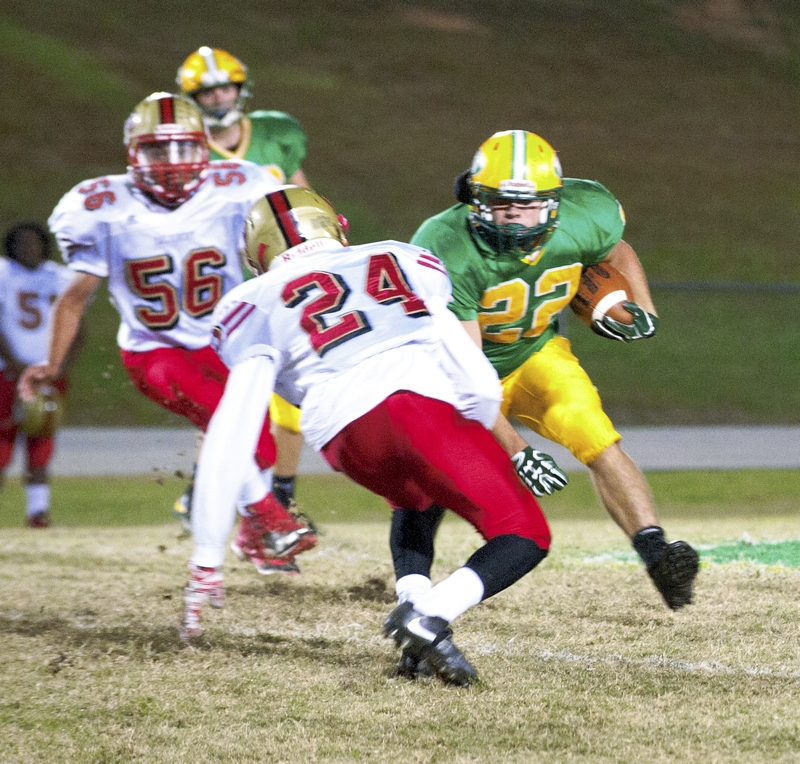 TYRO — The lights went out at Glosson Stadium, 10 minutes before kickoff Friday night at West Davidson.

It took Salisbury a little more than a quarter to turn out the lights on the Green Dragons.

The Hornets used a quick score, a fumble that led to another touchdown, and a score just before the half, to pull away for a 42-10 Central Carolina Conference win.

Cameron Horne caught two touchdown passes and ran for another as the Hornets moved to 3-7 overall and 2-2 in the CCC. Salisbury closes out the regular season next week, hosting rival North Rowan. West slipped to 3-7 overall, 0-4 in the league, one week after a heartbreaking four-overtime loss to Lexington.

The Dragons actually held their own for a quarter, and Andrew Brown’s 34-yard field goal early in the second quarter gave the home team a 3-0 edge. But Salisbury needed only four plays to answer with Horne’s 24-yard touchdown romp, recovered a fumble on West’s next play, then quarterback Tyquan Jones hit Horne with a 22-yard scoring strike that depleted the Dragons.

“Those were backbreakers … we couldn’t come back from them,” West coach Bryan Lingerfelt said. “Then we’ve got to be able to control the ball, keep them off the field.

“They’re a pretty explosive team, they made some explosive plays,” continued Lingerfelt. “They had a couple kids make some really big catches for them in the passing game, and they hadn’t shown much of that.”

The biggest play in the passing game came just before intermission. With the Hornets leading 14-3, Jones connected with Trell Baker for 34 and 23 yards to set up first-and-goal. Two plays later, on the last play of the half, Jones — with linebacker Michael Starbuck hanging on his jersey in the backfield — lofted a pass into the end zone and Horne came down with it. Just like that, the Hornets led 21-3 and West was shaken.

“He just threw one up, and the guy made the catch, and that one really hurt,” Lingerfelt added. “But we went in and really challenged our players, and had a great drive in the second half. We’re really proud of them. They came out and made plays, we just couldn’t make enough of them in the second half.”

The Dragons gave themselves a chance to make it a game with a nice drive to start the second half. Brett Lingerfelt, the coach’s son, found C.J. McKinney for a big completion on third down to keep the drive going, then hit McKinney on a post corner route for a 25-yard touchdown to get West within 21-10.

But the wheels completely fell off for the Dragons after that: Salisbury needed only four plays to get back in the end zone with Trell Baker’s 9-yard TD run, then Marcus Corry plucked a fumble out of the air on the ensuing kickoff and took it 32 yards to the house. Tyrone Johnson finished off the scoring with a 36-yard dash, midway through the fourth quarter.

Salisbury coach Ryan Crowder was pleased to see his plan come together. “The quick scores there really helped,” Crowder said. “The one right before the half was a big one.

“We’ve got some backs who can run hard, and we’re starting to come around a little bit. We were putting the ball on the ground some,” continued the Salisbury coach. “This is the second game all season that we didn’t turn the ball over. The same thing happened against Lexington, and both of those were victories.”

Baker led the Hornets with 99 yards rushing. Tanner Garrison ran for 81 yards for the Dragons, who travel to East Davidson next week.