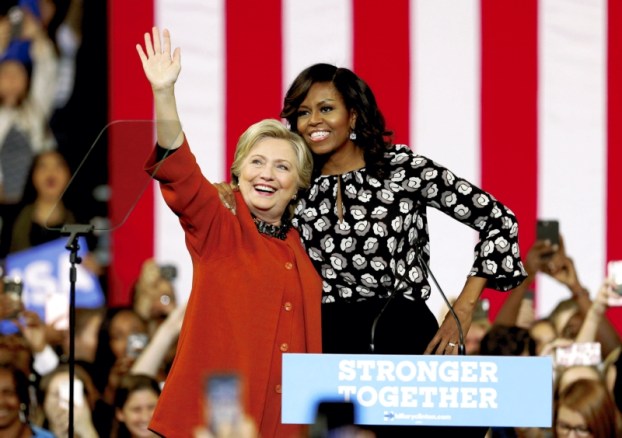 WINSTON-SALEM — First Lady Michelle Obama on Thursday focused on the future of the nation’s children and fitness for office when she gave a rousing speech to a crowd of thousands in Winston-Salem.

Obama appeared alongside Democratic Presidential nominee Hillary Clinton at Wake Forest University’s Lawrence Joel Veterans Memorial Coliseum. It was the first time the pair have appeared together at a North Carolina campaign event. Clinton and Obama on Thursday both gave speeches focused on the importance of voting in 2016, but one of the two was clearly a crowd favorite.

A mostly-full arena turned rowdy as Clinton turned the microphone over to Obama, who said party affiliation doesn’t matter in the 2016 election.

“None of that matters this time around,” Obama said. “This election is about something much bigger. It’s about who will shape our children and the country we need for them, not just for the next four or eight years but for the rest of their lives.”

She drew sharp lines between the two major party candidates — Clinton and Republican presidential nominee Donald Trump. Obama didn’t mention Trump’s name, but she didn’t need to for the audience to understand. She said one candidate wants Americans to “build walls and be afraid.” Obama said Clinton’s plan for is “one where we are always stronger together.”

In addition to the effect of a candidate’s policy, Obama focused on how a president’s words and actions affect children’s thoughts and opinions. She started by describing herself and her husband.

“Every day, we try try to be the kind of people, the kind of leaders, that your children deserve, whether you agree with our politics or not,” Obama said. “When I think about this election, let me tell you, that is what I’m thinking about. I’m asking myself ‘what do my girls and what do all our children deserve in their president?’ What kind of president do we want for them?”

Continuing, she listed a number of character traits that a president should have. One of those traits was valuing America’s diversity.

At one point in the speech, Obama paused to comment that her many appearances on the campaign trail may be unusual. However, it’s an unprecedented election, she said. Obama also called Clinton the most qualified person to ever run for president.

“Hillary has done her job, now we need to do our job and get her elected president of the United States,” Obama said.

Her speech routinely provoked an already excited crowd into cheers more typical of a sporting event. From the rafters to the the standing-room-only crowd on the floor, attendees repeatedly filled the arena with deafening applause.

In the crowd were roughly a dozen people who traveled together from Rowan County. Salisbury resident Lewellen Padgett said she finds the message of Clinton and her surrogates to be uplifting instead of divisive. It’s a reason she supports Clinton.

“It’s wonderful to have a positive outlook for our country and a positive outlook on our future and to not be around energy that’s divisive and negative,” Padgett said. “I think we’ll have a lot to look forward to when Hillary is president.”

Obama spoke extensively about the bitter rhetoric used during the 2016 presidential campaign. She encouraged people not to be discouraged by claims that there will be “a rigged election.” It’s a claim meant to reduce voter turnout, she said.

“I urge you to please, please be encouraged,” she said. “I want our young people to be encouraged because we still live in the greatest country on earth. We do. And, I have never felt more hopeful about the future.”

Obama trotted out the now-common line “when they go low, we go high” to describe voting in 2016.

“Casting our vote is the ultimate way we go high,” she said. “It’s turnout that’s going to make a difference.”

Responding to Thursday’s campaign event, Republicans focused on “skyrocketing Obamacare premiums.” Insurers are set to raise premiums for Affordable Care Act plans by an average of 25 percent in 2017. In a statement issued through the Trump campaign, U.S. Rep. Mark Meadows called the Clinton-Obama rally “desperate.

“Michelle Obama and Hillary Clinton’s desperate attempt to rally her base is simply another failed attempt to persuade North Carolinians to vote for a corrupt, three-decades-long, career Washington insider,” Meadows said.

“They determine whether or not our children have good schools, whether they can see a doctor when they’re sick, whether they’re safe when they walk out of the door on the way to school,” Obama said.

Clinton also briefly talked about policy when she listed a number of topic areas that should compel people to vote in 2016.

Those policy areas included: climate change, immigration, marriage equality, infrastructure investment and student debt. Dignity for women and girls was another item she mentioned as being a reason to vote.

“I believe everything we care about is at stake in this election,” Clinton said.