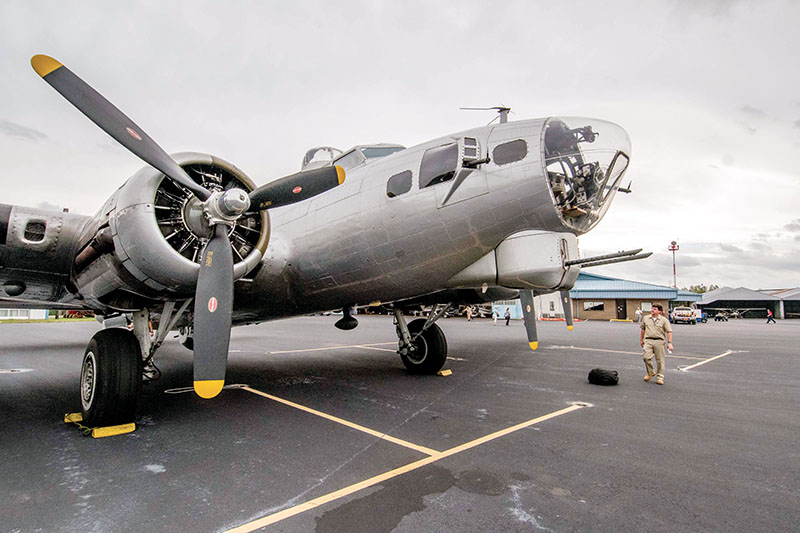 JON C. LAKEY / SALISBURY POST Aluminum Overcast, The flagship of the Experimental Aircraft Association out of Oshkosh Wisc., is back at the Rowan County Airport for a few days offering rides for aviation enthusiasts. The vintage B-17G Flying Fortress is one of the few remaining bombers of its kind able to fly.

SALISBURY —  On the runway apron at Rowan County Airport, the B-17 stands proudly like the monstrous engineering marvel it was, living up to its identity during World War II as the Flying Fortress.

And in the air, looking out the windows from where bombs were sighted or machine guns fired on enemy planes, you understand quickly how vulnerable and courageous the 10-men crews on the B-17s were.

“I just loved going up there where my dad sat on missions,” said Mark Perrou, whose father was a bombardier on a B-17 in World War II.

Perrou’s dad was part of the 398th Bomb Group, and the B-17 Perrou flew in Thursday carries the colors of that bomb group, which flew hundreds of missions over Nazi-held territory during the war.

Perrou, who lives in Valdese, and eight others were part of a media flight Thursday afternoon that included state Sen. Stan Bingham of Denton and his wife, Lora.

“It was wonderful,” said Bingham, 71, who is not seeking re-election after 16 years in the General Assembly. “I’m just so glad to have the opportunity to come over here.”

Bingham had a relative who flew many bombing missions in Europe during World War II, and his paper offered a special series of stories on other veterans, many of whom also were crew members on B-17s.

For some, it was the first time they had really shared their World War II experiences, Bingham said.

Less than 15 of these famous bombers are still airworthy, including this B-17 “Aluminum Overcast” model owned by the Experimental Aircraft Association.

The EAA, represented by local Chapter 1083, will offer flights and have the Aluminum Overcast on display at the Rowan County Airport today through Sunday.

Flights can be purchased from 10 a.m.-1 p.m. Ground tours of the plane also are offered from 2-5 p.m. Veterans enjoy free ground tours, and some seats are reserved for veterans on the flights.

Susan Robb, a local pilot and member of the EAA, was able to accompany the media flight. She described her trip as great, though a bit windy. From start to finish, the B-17 is a constant roar, but after takeoff, passengers are allowed to walk from the waist section to the front nose of the plane.

They can sit in the bombardier’s and navigator’s seats, say hello to the pilot and co-pilot in the cockpit, spend time in the radio room and take in generous views of the countryside from the front and sides of the bomber.

EAA volunteers provide the crews for the Aluminum Overcast, which travels across the country. Over its lifetime, it has logged more than a million miles.

Russ Morris, who lives in Fort Myers, Fla., said crews typically spend 14- to 16-day tours with the Aluminum Overcast, though in his 18 years with the EAA he has sometimes been with the plane for a couple of months.

Morris said he likes meeting the people most of all during the B-17’s stops across the country.

“It’s the greatest attractor of very unique people,” said Morris who marvels that such a machine could have been designed with “slide rules and pencils.”

“… She’s big until you get her around a really big airplane, then she’s not so big,” Morris said.

The EAA crews accompany the B-17 with a maintenance trailer and T-shirt trailer. Local EAA members help with the sale of souvenirs from the T-shirt trailer, Robb said.

Nick Hirsch served as crew chief on the media flight and ran down the dos and don’ts. He warned of the noise and the bumpy ride, informing the passengers where they could find hearing protection and sick bags on the B-17.

“It’s kind of neat to be up there,” Hirsch said.

The inside of the plane has plenty of exposed wiring, sharp sheet metal and no insulation. Thursday’s flight took about 30 minutes and flew over High Rock Lake before turning back.

B-17s had long-range capabilities and were used primarily in bombing missions over Europe in World War II, flying from bases in England. Some missions could be as long as eight hours, going deep into enemy territory.

Most of the planes were cut up for scrap metal, used in Air Force research or sold as surplus.

By 1946, it was purchased as surplus for $750. According to the EAA, it then served as a cargo hauler and aerial mapping platform. It also was used in pest control and for forest dusting.

A group of investors interested in preserving its military heritage purchased he B-17 in 1978. They donated it to the EAA in 1983, beginning an extensive restoration of more than 10 years and thousands of hours by staff and volunteers at the EAA’s headquarters in Oshkosh, Wisc.

When the airplane was sold in 1946, most of its original military equipment had been removed. During the restoration, many of those items were located, refurbished and installed in the Aluminum Overcast.

They include things such as the bombsight in the nose of the plane, restoration of the navigator’s position in the nose, installation of waist guns, rebuilding the radio compartment, returning the floor to its original configuration, installing the tail turret assembly and putting in a replica top turret.

This B-17 made its first national flying tour in 1994. It eventually will be housed in the EAA’s AirVenture Museum, which features other World War II aircraft and exhibits, according to the organization’s website.

Little chosen as artist for this year’s Christmas Honor…