United Way campaign up to 80 percent of goal 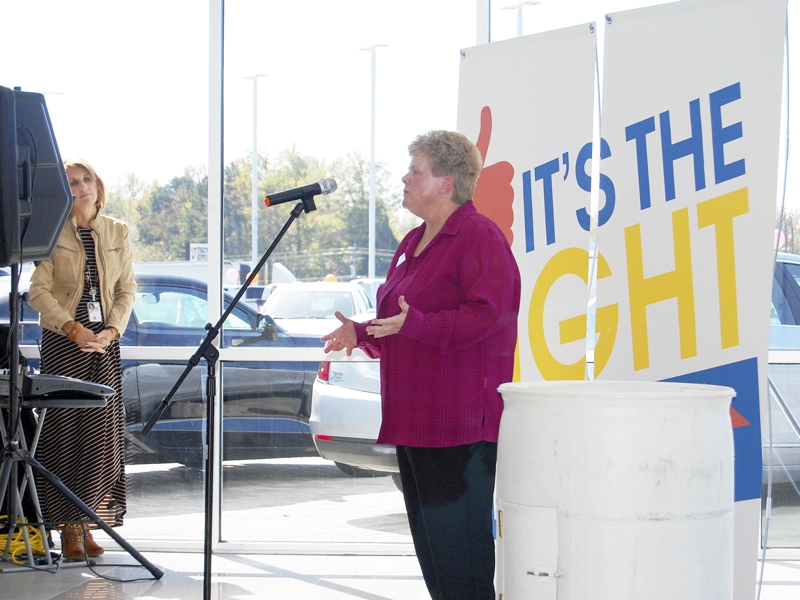 Amanda Raymond/Salisbury Post Rita Sims, executive director of Meals on Wheels of Rowan, Inc., told the story of how one of her volunteers found a person in distress during a delivery. The United Way, an organization that provides funds to Meals on Wheels and other agencies, has raised 80 percent of its $1.5 million campaign goal.

SALISBURY — Rita Sims, executive director of Meals on Wheels of Rowan, Inc., recently received a call from one of her volunteer deliverers.

The volunteer said she drove up to a house to deliver a meal and the resident’s dog was left outside, which was unusual.

She knocked on the door and at first got no answer.

“Finally, she knocks again a little bit harder, and she hears it: ‘Help me,’” Sims said.

The volunteer called emergency personnel, and they took the resident to the hospital. Once the resident was released a couple of days later, he called to thank Meals on Wheels and the volunteer.

The resident said he was not sure what happened, but he was taking a shower on Saturday night and was found in his bathtub on Monday during the Meals on Wheels delivery.

“He had no idea of how he got there, but he knew that we were coming,” Sims said.

Meals on Wheels is just one of many agencies that benefit from funds from the Rowan County United Way.

“So, when you give to United Way, it is the right thing, and you just never know who you might help, and it just might be your neighbor or your family,” Sims said.

Sims told that story during the United Way’s third report meeting for its annual campaign at Team Chevrolet, Buick, GMC and Cadillac on Wednesday.

Greer-Link urged attendees to talk to people who have not donated to the campaign yet in order to push the funds over the 100 percent mark.

“Dentists, doctors, we’re in these businesses,” she said. “We can ask, ‘Have you given?’”

Greer-Link said if only 100 percent of the goal is met, the funding that agencies usually receive will decrease.

“We’ve got a great community. This community is fantastic, so let’s hit the people who haven’t heard about it,” she said.

The names drawn for the annual car giveaway were Eddie Livengood from Daimler Trucks North America, Eric Slipp from AkzoNobel and Kashawn McRavion-Little from Rowan County Social Services. Their names will be added to those previously selected for the final drawing.