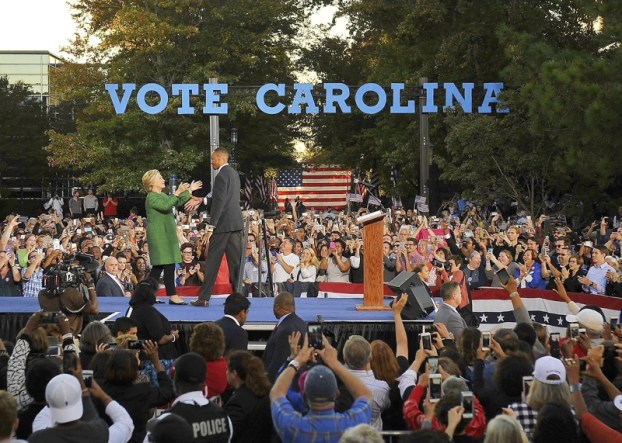 Alexander, a 2015 graduate of Salisbury High School, has been volunteering with the Clinton campaign as a University of North Carolina at Charlotte campus fellow for months. In high school, Alexander ran cross-country, competed on the track team and played basketball. Now a college sophomore, he splits his time between school, work and making sure his fellow students are registered to vote. For Alexander, voting means being prepared for the future.

“We are currently in school trying to prepare for our future and our children’s future, and it’s very important that we be aware of these issues,” he said.

Thurston is an economics major with a political science minor who dreams of becoming a lawyer. He said he’d played around with the idea of going into politics, but decided to pursue law for now.

And when he was approached by the Clinton campaign on Friday about speaking at Sunday’s early voting event, it was a complete surprise.

“At first I thought it was a joke or something,” he said.

Alexander said he usually never answers calls from numbers he doesn’t know, but on Friday, he decided to pick up — it was from Clinton’s campaign secretary, asking if he’d like to introduce the nominee Sunday.

“As the conversation progressed I realized that this was the real deal, and I was excited,” he said.

But it didn’t give him a lot of time to plan. The event, an early voting speech held outdoors at UNCC’s Belk Plaza, was scheduled for Sunday at 5:30 p.m. He spent the next 24 hours thinking about what he wanted to say. Alexander said he didn’t get much sleep that night.

Inspiration hit Saturday as he was watching college football.

Alexander chose to focus on things about himself and his life that he felt Clinton understood — his middle-class background and his mother’s job as an educator.

“And I just basically focused on that,” he said.

Members of Alexander’s immediate family were told he would be introducing the nominee, and came out in support. But for his peers, it was a surprise. Salisbury native Thurston Alexander has been volunteering for the Clinton campaign at UNC Charlotte for months, working to get fellow students registered to vote. He said he was “humbled” to be asked to introduce Clinton, and used his time to speak about empowering middle class families like his own. Wade Bruton/UNC Charlotte

Before the speech, Alexander said he had the opportunity to meet Clinton.

“It was not what I expected,” he said.

He expected to be politely brushed aside. Instead, he said, Clinton asked him questions and wanted to know about his life, who he was and how he got involved in her campaign.

During his introduction speech, Alexander told the crowd about the values of hard work and perseverance he learned from his family.

“One critical lesson that I learned from my parents is that in order to succeed, you must go through the grind. You must be willing to work hard. I am currently experiencing what that means first hand,” he said Sunday.

Alexander also encouraged his fellow students to vote, and told the crowd he planned to vote on campus on Thursday. This will be the first election in which he is able to vote, he said.

He also spent some of his short speech talking about Secretary Clinton.

Even though thousands were watching, Alexander said he didn’t feel nervous.

Alexander said the opportunity allowed him to learn how a campaign works behind the scenes and to witness how Clinton prepared to speak at different places. And most of all, Alexander said, he felt like he now has a real-life connection with the candidate.

“I feel very humbled and honored to have done this,” he said.

By Josh Bergeron josh.bergeron@salisburypost.com SALISBURY — Democratic congressional candidate Bruce Davis has $118,000 in tax liens filed against him since... read more