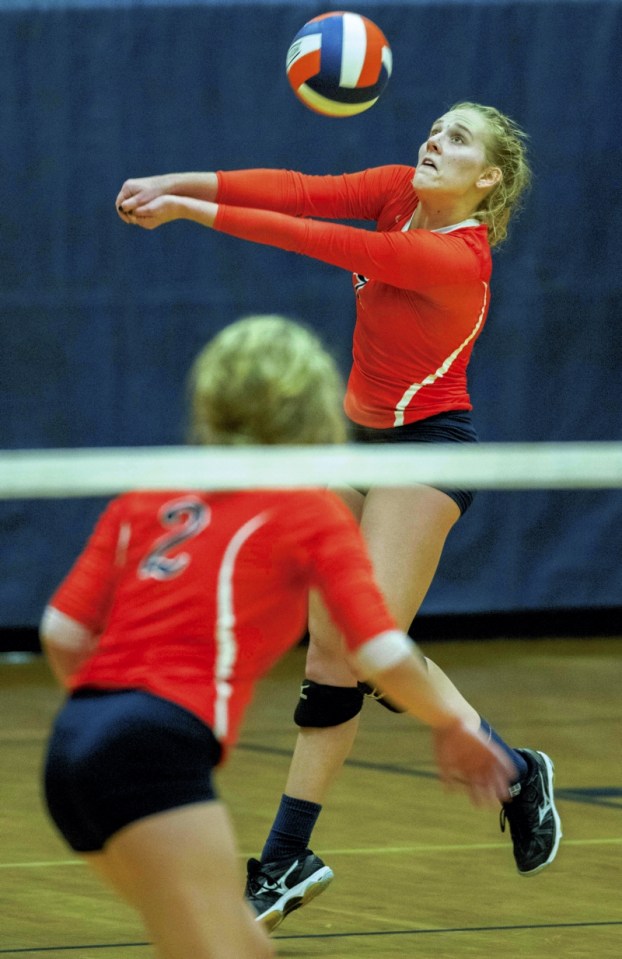 CHINA GROVE — Back-to-back aces by sophomore Kamya Latson finished off Carson’s season on Thursday night, as Enka staged a colossal comeback and defeated the Cougars, 18-25, 14-25, 25-16, 27-25 and 15-9.
It was a devastating second-round loss in the 3A state playoffs for Carson (23-6), who appeared to have things completely under control after seizing the second set easily, taking a 2-0 lead.
“It’s one thing to get your tails kicked, but it’s hard to lose when you had it won,” Carson coach Kelan Rogers said glumly. “And we had it won.”
Enka junior Abbie Trantham was good all night with 21 kills, and junior Kloyee Anderson (16 kills) was a difference-maker after she got rolling. Late in the match, Latson turned it on, too, and then the Cougars were in trouble.
“We started out playing intense,” Carson sophomore Mallory Weast said. “But then we lost some of that intensity. We got worried about them coming back and beating us, and it got to us.”
Elena Turnbull, playing her last match for the Cougars, had 19 kills and six aces. Lindsay Elmore keyed Carson’s fast start and finished with 14 kills. Weast, an undersized outside hitter with a startling vertical jump, had 13 kills.
“We did as much scouting as we could do in 24 hours,” Enka coach Jennifer Kruk said. “We knew No. 7 (Turnbull) was special, that she was going to be the go-to for them in big situations, and we knew the tall girl (Elmore) was going to be tough at the net.”
Six of Elmore’s kills came in the first set. Carson led all the way. Enka made a push to trim a six-point deficit to 15-13, but consecutive kills by senior setter Chloe Jacobs, Weast and Elmore put the Cougars out of danger.
Enka’s girls had beaten West Rowan at home on Wednesday, then had gone to school Thursday before getting out at lunch-time to prepare for the long voyage to China Grove. There were some weary legs at the start of the match, but Enka (14-6) slowly got loose and gained confidence.
Enka started well in the second set for a 6-3 lead, but several violations — carries, lifts and double hits were being called more closely than usual — helped send Carson on a 10-0 run that knocked out the visiting Sugar Jets.
At that point, it was hard to imagine Carson ultimately losing, but Kruk was far from throwing in the towel. Her team was in familiar territory.
“This wasn’t the first time this year we’ve gotten down two sets and come back from it to win,” Kruk said. “We start slowly a lot, but these are great girls. They don’t ever quit. It’s usually just a question of whether there’s enough time to come back.”
In the third set, a couple of whistles went against Jacobs and forced her to change some things.
“They were calling some things different, and I had to adjust,” she said. “We all did.”
Anderson had five kills in the third set. With Carson down 13-10, Turnbull smashed a potential kill long, and then Enka went on a 5-0 run to take charge. Now it was 2-1, and some doubt crept in for Carson.
The fourth set was the pivotal one.
Carson got down 10-5, but Turnbull caught fire, Jacobs found her, and the Cougars made one of their patented runs. Carson caught up at 11-all and kept going, storming ahead 15-11 on savage spikes by Turnbull and Elmore. That made it a 10-1 run for the Cougars, and Enka was hanging by a thread.
Carson was still in firm control at 22-17 after another Turnbull kill, and then Jacobs set up Elmore for 23-18.
Two points from victory is where it fell apart for the Cougars with nervous miscues and uncharacteristic miscommunications.
When a ball fell between Weast and Madison Barnhardt that either could’ve played, it was 23-20, and when Enka made a diving dig and Turnbull smacked one long, Carson’s lead was down to 23-21.
A kill by Turnbull made it 24-22, and it was match point for Carson. The Cougars had several golden chances, but couldn’t put one away. Then Anderson blocked Elmore, and the lead was 24-23.
And then it was 24-all and 25-all.
Moments later, hard kills by Anderson and Traynham skipped off Cougars, and Enka had won the set.
“We didn’t play well at all on those last five points, just kind of gave it away,” Rogers said.
Enka had all the momentum going into the fifth set, but Carson took a 6-4 lead. But then things unraveled again. Enka scored eight of the next nine points to lead 12-7.
Turnbull had a kill and an ace to get it back to 12-9, but a kill by Anderson and Latson’s consecutive aces concluded the match.
In the handshake line, Kruk stopped Turnbull to tell her what a great player she was, but that was little consolation. It’s Enka that will be playing at undefeated West Henderson in Saturday’s third round, and not Carson.
“It was an amazing four years with Carson volleyball,” Turnbull said. “Great teammates and great coaches. Very tough loss tonight, but we also had some wins.”
•••
NOTES: Turnbull was a big part of teams that went 102-20, and Carson would’ve done better than 17-10 her sophomore year if she hadn’t been injured part of the season. … Carson also graduates Jacobs and Barnhardt, but Rogers will rebuild around all-county players Elmore and Weast.