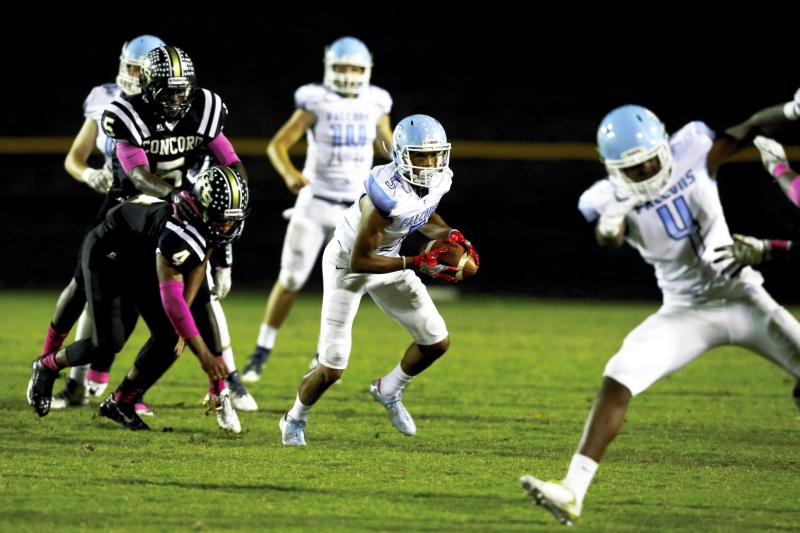 James Sipes/for the Salisbury Post ... West Rowan receiver Kortez Weeks (5) gets away from Concord’s Rocco Dsouza (4) and P.J. Hall (5) and picks up a first down, thanks to a block from teammate Shamari Evans (4). Concord won the game, 41-32.

Prep football notebook …
North Rowan got a monster game from senior nose guard Steven Thurston in Friday’s 14-13 win at East Davidson that gave the Cavaliers a good chance to win the Central Carolina Conference title.
Thurston was credited with 15 tackles. He had a sack and another tackle for loss.
•••
North’s running game was stopped by East Davidson, with the exception of a 74-yard scoring run by Jaden Perry. Leading rusher for the season Jaleel Webster was held to 9 yards on nine attempts.
•••
While the Cavaliers (7-2, 3-0 CCC) had a tough time on the ground, Corbin Smith was producing a career night in the air. Smith was 18-for-24 for 231 yards, with no interceptions.
Dakerius Hoosier’s career receiving night — five for 87 yards — was a big part of that. Alonzo Sirleaf made six catches for 83 yards, and De’Andre Gray caught a TD pass.
•••
The offensive line continues to be a key to North’s success. Smith wasn’t sacked on Friday.
•••
North overcame some mistakes to win its fourth straight game. There were two lost fumbles and 70 yards in penalties.
•••
Sophomore linebacker Tyzai Lyles is out with an injury, but another sophomore linebacker, Nautica Patterson, continues to play well.

South Rowan
Former South coach and AD Larry Deal, head football coach from 1983-1994 and an assistant coach for many years before and after that, passed away on Monday.
South would like for all athletes who played for Deal to attend Friday’s home game to honor him during the coin toss.
•••
South’s 55-0 loss to Hickory Ridge didn’t offer many positives, but things did get off to a good start. Linebacker Michael Sloop stopped Hickory Ridge’s first running play for a loss.
•••
South hasn’t had much luck with quarterback injuries for the last half-dozen seasons, and Austin Chrismon went down with a shoulder/collarbone injury early in the first quarter of Friday’s game.
When lost Chrismon it not only lost its quarterback, it lost its punter. Bailey Purcell stepped in as the punter. His first attempt wobbled 9 yards, but he was pretty good after that.
•••
South also missed offensive lineman Patrick Brooks on Friday.
•••
Linebacker Eli Johnson registered a tackle for a loss of 8 yards.
•••
Sayquan Anthony runs hard no matter what the score is, and he managed 48 yards against the Ragin’ Bulls despite being hit in the backfield several times.
•••
Since the win against Carson, South (1-8, 1-6 SPC) has allowed 555 rushing yards and 108 points in two games.
It will be a tall order to get back on track this week. South’s Senior Night will be against Robinson, and the Bulldogs are tied for first in the SPC.

Salisbury
Salisbury lost to Thomasville, 28-26, despite pounding for 347 rushing yards.
It was, by far, the Hornets’ best rushing effort this season and the most they’ve had since they rolled for 411 in last year’s win agains West Davidson.
•••
Salisbury back Cameron Horne had zero touchdowns not long ago, but he’s scored five in the last two weeks.
•••
Trell Baker his first 100-yard rushing game on Friday, picking up 104 yards.
Baker had a 100-yard receiving game against South Rowan on opening night.

Carson
The Cougars (3-6, 2-5 SPC) lost their fifth straight game when they fell to Northwest Cabarrus, 17-14, on Friday.
That’s the longest skid for the Cougars since they dropped five in a row early in the 2012 season.
•••
James Kotcamp scored both Carson TDs, giving him a team-leading seven for the season.
•••
Luis Cipres picked off a pass for Carson, while Zain Tucker recovered a fumble.
•••
Carson played its second game this season without quarterback Owen White. White was committed to playing with the South Charlotte Panthers baseball team in the Perfect Game Wood Bat World Championships in Jupiter, Fla.
Cole Sifford stepped in at quarterback and threw for 59 yards while running for 44. Sifford went over 500 rushing yards for the season.
•••
Devin Youker was Carson’s leading receiver with three catches for 34 yards, and Rhine Barnette ran for Carson’s eighth successful two-point conversion.
•••
Carson put up decent defensive numbers against Northwest Cabarrus. NWC’s Ben Coates III, the son of the former Livingstone and New England Patriots star, had three catches for 48 yards.
•••
The Carson-NWC jayvee game was wild, with the Trojans winning, 57-40. Northwest’s jayvees are pretty good — 5-3. They’re quarterbacked by John Williams, the son of former Catawba standout and current NWC defensive coordinator Steven Williams.

West Rowan
Jovon Quarles had his seventh straight 100-yard rushing game in Friday’s 41-32 setback against Concord and went over 1,100 yards for the season.
•••
West (7-2, 6-1 SPC) had a six-game winning streak snapped and lost for the fifth straight time to the Spiders.
•••
Kameron Caldwell wasn’t catching a lot of passes for West’s offense, but he’s made more of an impact since switching to defense at midseason.
Caldwell’s 52-yard pick-six was one of the big plays for West in the Concord game.
•••
Deyquan Byrd picked off two more passes against Concord. He has a county-leading seven for the season.
Malcolm Ingram, who had five picks in 2015, got his fourth of the season against Concord.
West lost despite getting four interceptions.
Concord QB Jacob Irby came into the game with four interceptions for the entire season.
•••
Kortez Weeks had two touchdown catches to boost his season total to 12. He has scored 33 touchdowns in his three varsity seasons. Weeks has 147 career catches, third on the all-time county list.
•••
Payne Stolsworth was fortunate that the Spiders dropped some interceptions, but he threw three TD passes (two to Weeks, one to Armoni Hogue) to boost his season total to 16.

East Rowan
It’s been a strange season for the Mustangs (3-6, 2-5 SPC). Since shutting out Northwest Cabarrus, 8-0, they’ve allowed 49 points two weeks in a row. That’s the most points given up by East in back-to-back weeks since it was outscored 109-0 by Salisbury and Concord to open the 2011 season.
•••
In East’s 49-23 loss to Robinson, East got career outings from quarterback Justin Smith and receiver Franklin Downing, and Max Wall had two touchdowns and a two-point conversion.
Smith was under 100 passing yards for the season when the Robinson game began, but he completed 17 passes for 238 yards and two touchdowns.
An 80-yard TD pass to Wall really helped Smith’s stats, but he also completed six passes for 83 yards to Downing and hit Steven Hardin with a TD pass.
•••
East gave up staggering numbers against a very strong Robinson team — 600 yards of offense.
Still, East has some young defensive players such as sophomore linebacker Christian Bennett and junior defensive tackle Devon Cherry who are going to be standouts.
•••
East has an interesting game at Central Cabarrus on Friday. The teams have identical records.

A.L. Brown
A.L. Brown (6-3, 2-2 MECKA) has only been shut out once in the last dozen seasons — that was a 14-0 loss to Hough in 2013.
The Wonders narrowly avoided being shut out by Mallard Creek in Friday’s 24-7 loss that knocked them out of the championship hunt in the MECKA.
Linebacker Sherard Sutton didn’t appear to be involved in a play going away from him in the final minute, but when the ball popped loose, Sutton was suddenly there to scoop it up and romp untouched for a defensive touchdown.
Sutton, 6-foot-3, 217 pounds, has 4.5 speed and probably is the Wonders’ most intriguing college recruit.
•••
Sutton also annihilated Mallard Creek’s punter when he bobbled a snap. It was one of the hardest hits of the season.
•••
Offensively, the Mallard Creek game was a nightmare for the Wonders — 106 total yards, three sacks and five fumbles.
The Wonders’ running game has been shut down the last two weeks by Hough and Mallard Creek. Fifty carries in those two losses have netted just 114 yards.

Davie County
Except when the War Eagles are off, and that was the case last week, Davie (8-1, 4-0 CPC) seems to play a big game. This Friday will be no exception. The War Eagles go to Mount Tabor (8-2, 4-1 CPC). The Spartans’ lone CPC loss was to West Forsyth, 33-27, on Oct. 14.
Based on the Brian Simmons power ratings, CPC schools Davie, West Forsyth, Mount Tabor and North Davidson are among the state’s top 27 4A squads.
•••
In his two seasons as Davie’s quarterback, Chris Reynolds has thrown for 4,530 yards and is now No. 2 on Davie’s career list. The all-time passing mark at Davie is Garrett Benge’s 6,392 yards. Benge was the starter for three seasons, from 2005-07.
Reynolds moved to Davie from New Jersey after Benge’s prep career was over, so he never saw Benge play, but he’s heard all the stories.
•••
Davie linebacker James Boyle made the 392nd tackle of his career to seal the win against North Davidson in Davie’s last outing.
Mocksville Enterprise Record sports guru Brian Pitts now has Boyle in fourth place on Davie’s all-time list for tackles. Only big names are in front of him now, three linebackers who went on to become D-I standouts — Jared Barber (West Virginia), D.J. Rice (Coastal Carolina) and Patrick Lowery (N.C. State). Barber’s 473 tackles tops the lost. Rice and Lowery, teammates at Davie, had 460 and 457, respectively.
Boyle has recently surpassed the tackle totals of two more D-I signees — safety Billy Riddle (Appalachian State) and linebacker Logan Buchanan (UNC), whose promising college career was cut short by a shoulder injury.
•••
Davie’s win against North Davidson came in its 61st homecoming game. That will be last homecoming game for Davie on its current campus in Mocksville.