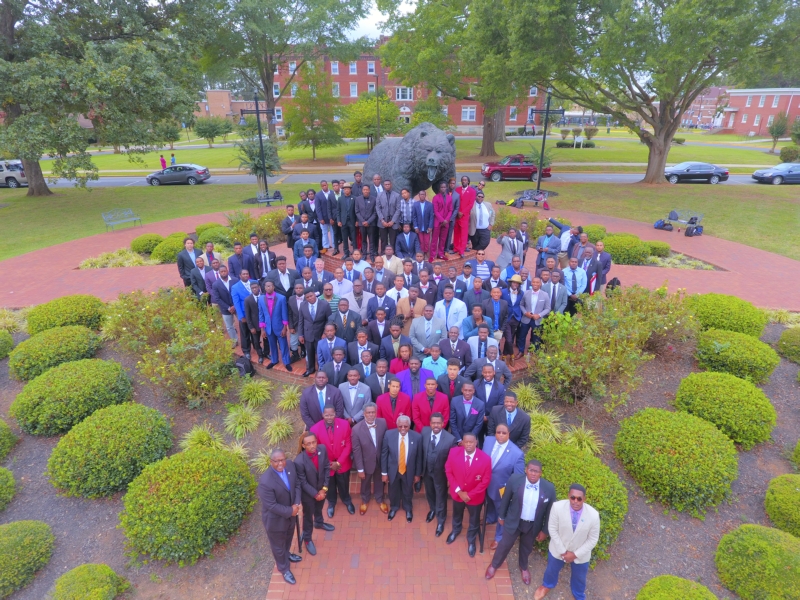 SALISBURY — Traditions abound at Livingstone College, and one such custom is weekly chapel — commonly referred to as assemblies.

When Dr. Jimmy R. Jenkins, Sr. became president of Livingstone 10 years ago, he decided to capitalize on the weekly tradition by inviting motivational role models to speak and to encourage students to translate lessons learned from the holistic learning curriculum into action.

The weekly gatherings in Varick Auditorium – named after Bishop James Varick, the first bishop in the African Methodist Episcopal Zion Church – are often quite inspirational and sometimes result in students making connections that lead to summer internships or jobs.

“I think it’s good for all of the students to come together during the assemblies,” said Marquyse Jackson, a senior business administration major from Kinston. “I think the assemblies bring us closer together as a family.”

The assemblies begin at 11 a.m. and usually last an hour, though sometimes they run over by about 10 or 15 minutes. When that happens, students scurry to the cafeteria afterward to grab lunch before their 1 p.m. classes.

The assemblies feature performances by the concert choir, directed by Dr. DaVaughn L. Miller, or the gospel choir, directed by Christopher Gray. They begin with an invocation by Campus Minster Troy Russell, followed by the singing of “Lift Ev’ry Voice and Sing,” widely considered the Negro National Anthem. While the historic song is sung, a video displaying its powerful lyrics and faces of famous African-Americans plays on multiple screens inside Varick.

The video also shows low points in American history, including hoses and dogs being turned on African-Americans, lynchings and Hurricane Katrina images. It ends with President Barack Obama, First Lady Michelle Obama and their daughters Malia and Sasha walking onto a stage in Chicago’s Grant Park in 2008 after he was elected president. It’s not uncommon for some in the audience to be moved to tears as the video plays.

“We begin assemblies with the singing of the Negro National Anthem because our students need to know their history,” Jenkins said. “But for those of us who are older, some of the video’s images, particularly ugly scenes from the Civil Rights Movement, are hard to watch. Nonetheless, I love it when we rise as one body to sing it.”

“Weekly assemblies are a time for students to learn about events on campus but also to showcase different organizations and to hear motivational stories from guest speakers,” said Kenya Glover, 2016-2017 Student Government Association president. “After leaving assemblies, students feel energized and are equipped to successfully finish the rest of their week.”

In the decade since Jenkins became president, assembly speakers have run the gamut from preachers, to educators, to actors, to musicians. Alumni often speak, and usually during the first assembly of the academic year Jenkins appeals to the students not to squander their time at Livingstone.

Alumnus Reverend Malcolm Byrd spoke to students in April 2015. Byrd, who earlier this year gave the opening prayer before a session of the United States House of Representatives, delivered a fiery, engaging speech rife with pop culture references.

Assembly speeches usually last 20-25 minutes to ensure there’s time for musical selections, announcements and other business. During assemblies, Jenkins occasionally rewards students, faculty and staff who’ve demonstrated excellence with Blue Bear Bucks, “money” that can be spent on snacks and other items in the student bookstore.

Voter registration and other important issues are sometimes discussed at assemblies, which always end with what Jenkins affectionately calls “goose pimple time,” or the singing of Livingstone’s alma mater.

“I think it’s great that Dr. Jenkins has continued the tradition of assemblies and enhanced them as a way to strengthen the campus,” said Bishop George E. Battle, Jr., Senior Bishop in the AME Zion Church and chairman of the Livingstone College Board of Trustees. “When I was a student at Livingstone from 1965-1969, we had mandatory lyceum programs and were told if we didn’t come we’d get negative marks against our record.

“The students at Livingstone now come to the assemblies not because of any threats against their grades but because they know they’re going to be blessed with great speakers,” Battle continued. “We invite the community to attend our assemblies because there’s nothing we say or do that we don’t want people to know. And Nov. 12-19 during our celebration of Dr. Jenkins’ 10-year Anniversary, we’re going to ensure the assembly recognizes all of the numerous accomplishments he’s made at Livingstone.”