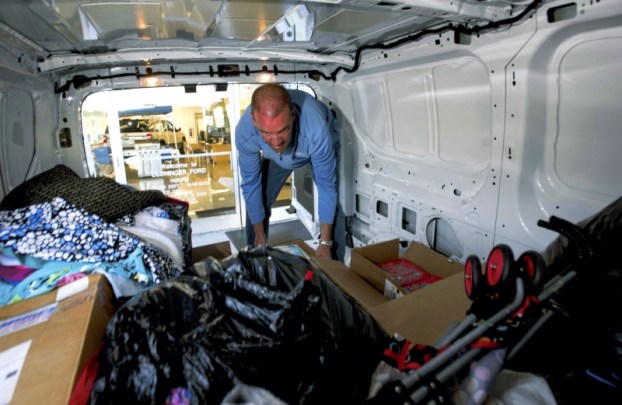 Cloninger Ford General Sales Manager David Wilson helps load up a transit van at the dealership that Trey Holloway will drive to Lumberton. Charles “Trey” Holloway III, a detailer at Cloninger Ford in Salisbury, felt compelled to take up donations to help victims of flooding in the Lumberton area. Jon C. Lakey/Salisbury Post

SALISBURY — Last December, Trey Holloway earned a college diploma from UNC-Pembroke. This month, he started paying his college community back.

Holloway drove a transit truck full of donated food, clothing and other articles to Lumberton on Wednesday, the second such trip he has made since Hurricane Matthew’s torrential rains sent the waters of the Lumber River over its banks and into the city.

Cloninger Ford, where Holloway works, let him use a company transit van and helped with donations.

“It’s all about giving back and helping people,” said Holloway, whose full name is Charles Holloway III. A 2011 graduate of West Rowan High School, he majored in criminal justice at Pembroke and played football for three seasons, he said.

The load he took to Lumberton on his first trip last week was all bottled water. Holloway asked fellow Cloninger employees to bring two to three cases each. Those donations were matched by the dealership’s top management — owner Larry Cloninger, Nathan Peele and Larry Wilson

They wound up with about 400 cases, and the loaded-down truck could barely go 45 mph, Wilson said Wednesday after helping Holloway load up for his second trip.

Holloway said he’d never seen anything like the devastation he found when he got down east. While waters had already receded at Pembroke last week, much of Lumberton was still flooded. Fuller’s, which he calls “the best restaurant in Lumberton,” was completely under water. Homes were heavily damaged, ruined furniture was piled by the road.

“I had a tear or two down my eyes,” Holloway said. “It was pretty sad.”

The apartment he used to live in was flooded.

“If I hadn’t graduated in December, I would have lost some stuff,” he said. “I know some friends, they actually lost their cars.”

The situation was not much better when he unloaded the truck on Wednesday at Southeastern Community and Family Services and then went riding around. The waters may have receded some, but damage was heavy, and there appeared to be fewer people helping.

Again, mattresses, clothes and furniture were piled on curbs.

He saw a TV news crew interviewing a family with about six children beside their damaged home. They looked miserable, he said.

“It was just really sad.”

Holloway starts Highway Patrol school in January. He said he wants to “help people and see if I can make a difference in the community.”

But that’s way off. Right now, he’s making plans for next week. He hopes to return to Lumberton with another truckload of help from Rowan County.

“I would love for the Salisbury community to come together to help the people down here,” Holloway said in a phone interview after making his delivery. “Because they still need help.”

Wilson said anyone wanting to contribute items can drop them off at the Cloninger Ford dealership on Jake Alexander Boulevard.

Here’s a list from Southeastern Community and Family Services of the things people need most:

Clothing: New underwear and socks of all sizes (including children’s).