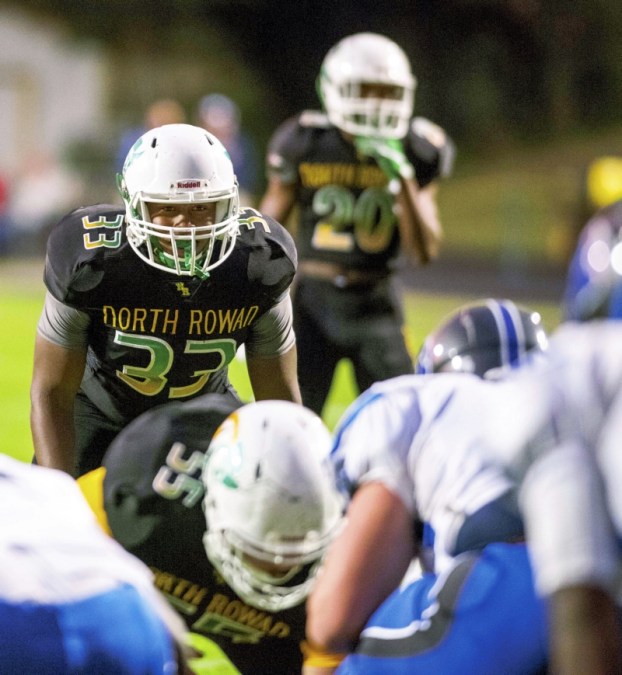 JON C. LAKEY / SALISBURY POST ... North Rowan’s Javin Goodine (33) awaits the snap before a play during the game with Statesville on Sept. 2. Goodine is the Post’s Friday Night Hero after last week’s performance against East Davidson.

SPENCER — North Rowan’s all-county linebacker Javin Goodine has been banged up.
A balky shoulder caused him to exit the South Iredell loss early and to miss the West Stokes game enirely. Before that, he tore off a thumbnail at Statesville, and when he lost feeling in his hand, he had to head to the sideline.
But when he’s in one piece, Goodine (5-foot-10, 210 pounds), a block of granite who is the strongest player on the team, dishes out a lot more than he receives. The senior came through with a career-best 17 tackles in Friday’s 14-13 win at East Davidson — a game that may decide the Central Carolina Conference championship.
“Our defensive line kept people off Javin and allowed him to roam free,” North coach Ben Hampton. “And he more than did his part. He saw the guard pulls, and he got to the right places.”
After routing East Davidson, 58-0, in 2015, North players may have had a tough time getting up for Friday. But North’s coaches expected a serious challenge. East Davidson had beaten Salisbury and Thomasville on back-to-back weeks, knocking off Thomasville for only the second time in school history.
“They’ve got an outstanding running back (Skyler Shewcow) who is over 1,000 yards for the season, and they were strong enough to beat a good Thomasville team without him,” Hampton said. “East Davidson is hard to stop. They can throw it, and then they’ll get in a two-back set with a lot of bodies coming downhill at you.”
East Davidson had rushed for a scary 500 yards in a win against Wheatmore. Its season low on the ground before Friday was 143 rushing yards against Ledford.
Led by Goodine, North would hold East Davidson to 110.
But things went East Davidson’s way on both sides of the ball in the first half.
“We really weren’t playing like ourselves for some reason,” Goodine said. “We were back on our heels, not playing with a lot of confidence. We weren’t stopping them on third down. They kept converting, and we couldn’t get our defense off the field.”
North fell behind, 13-6 by halftime, with both East Davidson scores coming through the air.
“We had some miscommunications on coverage,” Goodine said. “I told guys they liked to talk in school, so they needed to be talking more on the football field. You’ve got to echo that defensive call and make sure everyone’s on the same page.”
If Goodine sounds like a coach, it’s because he practically is.
“He could call every defensive play,” Hampton said. “He’s the leader out there, the captain on the field. He gets everyone lined up where they’re supposed to be.”
Javin’s father is Rodney Goodine, who came out of Seneca, S.C., to become a four-year stater and an All-America linebacker for Catawba in the late 1980s. Rodney is a big part of North’s coaching staff. He coached defensive backs last season, but now he’s working with the linebackers in a 4-2-5 alignment. So there’s daily interaction with his son. That’s always an intense and interesting dynamic.
“I’m sure he coaches me harder than he does anyone,” Javin said with a smile. “And it also means I get to hear it from him at home as well as on the field. But it’s a good thing. I’ve learned so much from him. He’s always made sure I do it the right way.”
Rodney’s influence is the reason Javin has Superman strength. He lifts weights almost daily during the offseason.
“There’s some God-given ability there, obviously, but Javin also transformed his body,” Hampton said. “He’s made himself into the kind of linebacker we needed him to be.”
Late in the first half, the Cavaliers were just trying to make it to halftime with a 13-6 deficit.
“The goal was to keep the deficit at one score,” Goodine said. “I knew we could regroup at halftime and the coaches would make adjustments.”
The biggest adjustment was moving Zion DeBose, 230 pounds of destruction, from outside to inside. That changed some things.
“It also helped that we were moving the ball more on offense,” Goodine said. “We were getting more rest.”
A 74-yard run by Jayden Jones tied the game, Jacob Young’s PAT put North ahead by a point, and then North’s defense dug in.
“We battened down the hatches in the second half,” said Hampton, using a nautical reference. “You’re going to give up yards to a team like that, but we kept them off the scoreboard in the second half.”
Goodine originally hurt his shoulder making one of his 13 tackles in the Salisbury game that concluded the 2015 regular season. He (and DeBose) missed the playoff loss with Winston-Salem Carver.
When he re-injured the shoulder making a rolling tackle in the opening minutes of the South Iredell game, North decided to rest him. That helps explain why North lost, 49-13.
“He makes a difference,” Hampton said. “That’s a great player and a great kid.”
The East Davidson game was Goodine’s third outing this season with double-figure tackles. The others came against Davie County and Carson. He has eight double-figure games in his three years as a varsity starter. And if he can stay healthy, he’ll get some more.
“The shoulder is still a little weak, but it’s not something I can’t play with,” Goodine said.

Prep Girls Tennis: East wins over Forestview in first round

By Mike London mike.london@salisburypost.com GRANITE QUARRY — Darkness was descending, her teammates were getting antsy, and her opponent seemed tireless,... read more