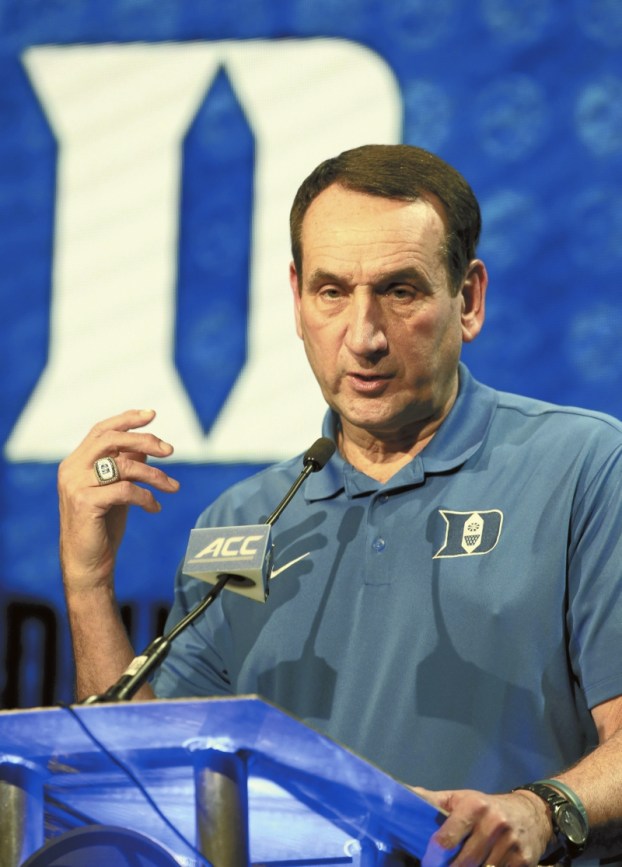 CHARLOTTE (AP) — Duke has been picked to win the Atlantic Coast Conference title ahead of North Carolina, Virginia and Louisville.

CHARLOTTE (AP) — The Atlantic Coast Conference has shaken off a four-year Final Four drought with strong back-to-back postseason runs that have included winning one national title, playing for another and putting three teams in the national semifinals.

The trick now is to keep that momentum going for the league that considers itself college basketball’s best. The ACC also wants to increase its number of NCAA Tournament bids toward a still-unreached target of 10 invitations.

“I think with our 15 programs and as good as those programs generally are, I don’t think it’s unrealistic to point to that,” Commissioner John Swofford said in an interview Wednesday with The Associated Press during the league’s preseason media day. “But I also don’t think, if you’ve got seven, eight, nine and everybody talked about 10, that’s not failure — especially when they’re winning in the tournament.”

The ACC’s series of expansions over the past decade were supposed to push the league to juggernaut status by adding programs like Louisville, Syracuse, Notre Dame and Pittsburgh to a lineup that featured tradition-rich charter members Duke and North Carolina.

It’s taken some time — maybe a little longer than expected, the way North Carolina State coach Mark Gottfried sees it — but the league is starting to earn that status.

“I think you’re seeing now what we thought was going to happen a couple of years ago,” said Gottfried.

, whose Wolfpack has been to the NCAAs in four of his five previous seasons with two Sweet 16 runs. “Couple of years ago, we all said this is the best basketball league in America. It probably wasn’t just yet.

“I think what you’re seeing now, it’s happening. Just took a few years for us to get there. And part of that is because I think everybody’s better.”

Compare that to a year earlier, when Gottfried said the league had “work to do” to earn its claim as the nation’s best by regularly earning more than the six bids it got in 2015. The league went on to tie its record of seven and would’ve had a new high mark had a 23-win Louisville team not sat out with a self-imposed postseason ban amid an ongoing NCAA investigation into allegations that a former staffer hired escorts and strippers for sex parties with recruits and players.

Once in the tournament, ACC teams kept winning.

North Carolina reached the NCAA championship game. Syracuse made a surprise run to the Final Four. Four teams reached the Elite Eight and a record six teams got to the Sweet 16.

The league finished with a record 19 NCAA Tournament wins, surpassing the previous mark of 18 set by the Big East in 1985.

And that came one year after Mike Krzyzewski’s Blue Devils — this year’s preseason favorite for the 15th time under the Hall of Famer — won the NCAA title.

Notre Dame coach Mike Brey, whose Fighting Irish have gone to two straight Elite Eights, believes momentum from a strong finish can carry through the offseason and into the next season. He figures that’s a factor in the ACC’s broader success from the past two tournaments.

“Once you get to that second weekend, then you’ve got a group of guys coming back,” Brey said. “They talk about stuff like that. Then if you get the bid, they’re more believing they should advance. There’s a confidence instead of maybe a fear or an anxiety. I think that’s what’s happened with a number of programs.”

If Brey is right, the league could be in for another big year. Duke is considered a national-title contender, while UNC and Virginia have earned top-10 rankings in several preseason publications.

If one of those teams have a deep run, then it will be up to the next tier — Louisville, Syracuse, North Carolina State, Notre Dame, Florida State and Miami — to get the league within reach of double-digit NCAA Tournament bids.

“I think they both matter in their own regard, but everybody wants to say, ‘Oh the Big 12 put this many teams in’ or ‘the Big Ten put this many teams in,’” Miami senior guard Davon Reed said. “And that’s good. The ACC not only puts a lot of teams in, but I think our record in the tournament each year … speaks for itself — the ACC’s quality and the wins that they produce in the tournament.”