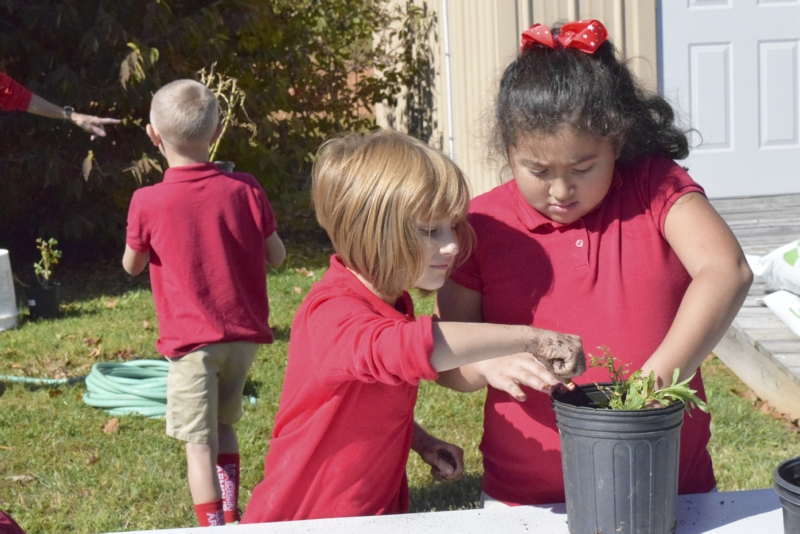 Autumn Garnet, left, and Marisol Sanchez Redonda, right, work together to repot a plant in their greenhouse club. At Shive, students are allowed to pick an age-appropriate club to participate in. Club hour is held on the last Wednesday of each month. Rebecca Rider/Salisbury Post

ROCKWELL — It started with a simple question. Zebbie Bondurant, principal at Shive Elementary, would often ask students about their weekend plans while they waited to be picked up in the car-rider line. Some chattered about going to the beach or the mountains, going camping or practicing ballet. And some had no plans.
After a time, Bondurant noticed a pattern.
“I realized that a lot of them don’t go anywhere or do anything,” she said.
Several students at the school did not have access to the same opportunities — and the barriers that kept them from going out on the weekend often barred them from participating in school extracurriculars, as well. A few years ago, Bondurant decided to take matters into her own hands.
When she first suggested holding a club hour once a month, she said her staff was wary.
“They thought I was crazy,” she recalled.
But with some work and careful planning, the idea took off. If you walk into Shive on the last Wednesday of the month, during the last hour of the day, the school is vibrant and alive. Students work through a yoga routine in the gym, or practice relaxation and de-stress techniques in a classroom. Some older students wander the halls taking photos for a photography club.

Outside, students play sports, or learn games. Over by the school’s greenhouse, Bondurant gives careful instructions to a gaggle of students about how to properly repot a plant.

Tuesday kicked off Shive’s third year of afternoon clubs. Over the past two years, Shive has had clubs on robotics, wildlife or making art from things found in nature. Since the clubs don’t have a budget, Bondurant said they try to keep things simple — parents or staff donate most materials.

“We just have to do with what we’ve got,” she said.

On a grassy patch behind the school, teacher Renee Call shows a group of students how to play “Red Light Green Light.” Her club, “Beginner Games” teaches students a variety of different games.

“These are games that they don’t ever get to play,” she said.

Call said she liked the club days, and that it encouraged students to be active and engaged.
Just a stone’s throw away in the school cafeteria, Traci Bost and Heather Silvia help students make a hot dog cooker out of a pringles can, a clear plastic sheet and some tape.

“We are harnessing the power of the sun,” she said.

Bost’s club, “Off the Grid” studies solar power. Over the course of the year, students will also have a chance to use a pizza box to make smores, and will work with the small solar cells that come in calculators or on top of outdoor lights.
“We’re trying to figure out how to be self-sufficient,” she said.

It’s new territory for Bost and Silvia — for the past two years, they taught students how to make origami.

Each Shive staff member is required to participate in leading a club, but they get to pick their topics. Bondurant said it’s a chance for teachers to share their interests with students.

“I think the adults get as much out of it as the kids do,” she said.

While the topics have to be approved by the school’s E3 committee, it gives staff an opportunity to do things like run a Dr. Seuss club for kindergarteners or to teach the basics of piano.

In the school’s media center, Nikki Wylie oversees nearly 40 students who are interested in learning about the police and military. Wylie, a former member of the military and a former first responder, brings in speakers each month from different military and police branches.

“With everything going on in today’s world I want them to a have a positive view of these people and let them know that they’re normal,” Wylie said when asked what inspired the club.

The clubs will run monthly for the entire year, culminating in a family night where students get to show off their work.
“This gives every child a chance to be in a club,” Bondurant said.
Contact reporter Rebecca Rider at 704-797-4264.