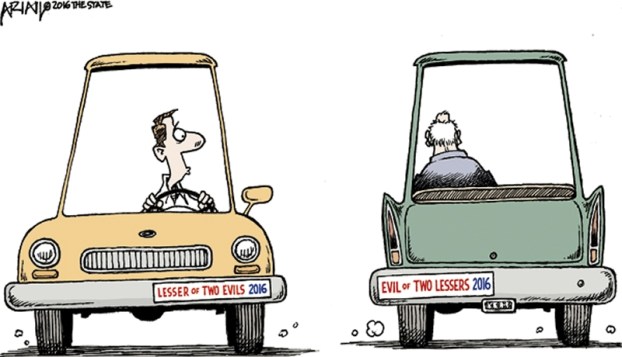 A few observations from an election season that defies description, all known adjectives rendered inadequate:

The players: One has the morals of an alley cat. One has the integrity of an alley cat. Barring a miracle, one of them will be sworn in as president of the United States on Jan. 20 of next year. Regardless of the winner, a satyr will be roaming the halls of The White House, the rest of the world will think we’ve gone absolutely bugchuckles, and, even if my candidate loses, I will fly the American flag out of respect for people and ideas too numerous to mention in this medium.

All seriousness aside for a moment, let’s ask some of the players to complete this line from “Take Me Out to the Ball Game”: Root, root, root for the home team, if they don’t win it’s ___.

Donald Trump: Because the game was rigged.

President Obama: Because of the Bush administration.

Bernie Sanders: OK, because winning is not as important as everyone getting free admission and concessions while the fat cats in the sky boxes pay their fair share.

I am mystified by the number of yard signs in support of the two major party presidential candidates. It is difficult to imagine anyone being jazzed enough by either candidate to admit allegiance. When people ask me who I am voting for, I tell them I’d rather not say. If I had a sign in my yard, it would read, “Let’s just get this over with.”

On several occasions I have read columns or letters in which sensible people defend Ms. Clinton by reminding us that, despite years of investigations, probes and inquiries, her accusers have been unable to make anything stick.

Absence of an indictment does not necessarily equate to absence of guilt. John Gotti, the “Teflon Don,” avoided prosecution for years before something finally stuck. Most intellectually honest people would agree that Gotti was not innocent of all crimes attributed to him. Perhaps Ms. Clinton, the “Teflon Blonde,” and Mr. Trump as well, learned early on to coat themselves with the non-stick surface provided by attorneys and accountants.

The emergence of Mr. Trump from the swamp of the Republican primaries is nothing short of amazing. At times one is literally dumbstruck, unable to form words to explain this most bizarre chain of events. In a realm governed by common sense, logic and reason, Mr. Trump finishes somewhere between Rick Santorum and a player to be named later. Instead, we answer the doorbell to find that someone has left a basket on our doorstep, a basket with a noisy, easily agitated bundle of joylessness.

Yeah, I know, we wanted a candidate who would forcefully take on the Democrats and the mainstream media, someone without ties to the D.C. establishment. We asked for an outsider and got an outre-sider. We wanted a candidate who could be blunt, and we got blunt-force trauma. Be careful what you wish for, and be painstakingly specific (and someone with a little class, please?).

Silver linings have been hard to find amid the acrid, billowing smoke of a scorched-earth presidential campaign. I was able to find some consolation in the aftermath of the release of the conversation between two spoiled frat-brats. Mainstream pundits took it upon themselves to express outrage on behalf of all American women, thereby relieving them of the burden of coming up with their own conclusions. This is not new.

In the ‘70s, women were told they could think for themselves (something we sons and husbands of Southern women had known for a long time). Leaders of the women’s lib movement then proceeded to tell women what to think (for themselves, presumably) about men, motherhood, marriage, abortion and career paths.

I was pleasantly surprised at the number of women within my little galaxy who spoke up rather forcefully, pointing out the hypocrisy (were it not for the 22nd Amendment, Bill Clinton would still be president), but also insisting on maintaining perspective and context. These are women I respect, whose judgment I find inspiring, and whose integrity soars light-years beyond those in the insulated, incestuous netherworld of national politics and the media who might dismiss them as unsophisticated.

The upcoming election will be the most important one in a long time. Vote wisely, for these are strange days, indeed.