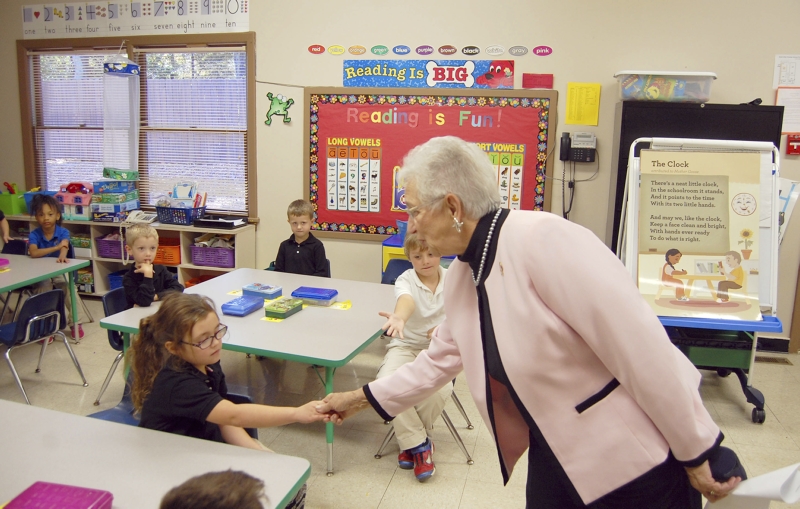 Whisonant said she has seen a real change in her son since he has been attending North Hills, and she would not have been able to send him to the private school without the scholarship.

“I could not do it without (the scholarship),” she said.

According to its website, Parents for Educational Freedom in North Carolina is an organization that supports parents having more choices for where they send their children to school, whether public, private or nontraditional and regardless of where they live or their income level.

“We believe in the value of having good options,” he said.

At North Hills Christian School, there are 16 students who have been awarded with Opportunity Scholarships, which provides funds for students who choose to go to participating non-public schools.

Foxx, a Republican who represents North Carolina’s 5th Congressional District, is the vice chair of the Education and Workforce Committee and is the presumptive chair for the committee.

Allison said because Foxx knows about the positive effects greater parental choice has had in North Carolina, she may be able to bring those initiatives to a national level in her potential new role as chair of the Education and Workforce Committee.

With Maria Lowder, executive director of the school, as a tour guide, Foxx walked through the school and peeked in on classes. The students greeted Foxx with Bible verse recitations and songs.

During an assembly, Foxx encouraged students to use the education they were receiving at North Hills to their advantage.

“You all are very fortunate to be in this school,” she said. “… You’re fortunate that you live in a country that gives you the freedom to choose your schools.”

She talked about the Constitution and the importance of the country’s freedoms.

“It’s so important that you understand that freedom is at the core of our country, and that freedom belongs to you, but it’s no good if you don’t exercise it,” she said.

After the assembly, Foxx said she appreciates Christian schools that emphasize history, the Constitution and other basic skills.

“They are able to offer a diverse curriculum and develop their talents,” she said, adding that those aspects are not just available at Christian schools, but at other public, private and nontraditional schools, as well.

Foxx said it was important for parents to have a choice on where they send their children to school.

“It creates diversity in our school so that it better reflects the body of Christ,” she said.

Foxx was also able to meet with parents of students who had received Opportunity Scholarships and Disabilities Grants.

Dorothy-Jane Kozlowski is a single mother of five. Three of her children were awarded the Opportunity Scholarship and her oldest was awarded the Disability Grant.

She said even with support from her family, her children would not be able to attend North Hills without the scholarship and grant funds.

“There’s no way that my children could be here without the Opportunity Scholarship,” she said.

She said she has seen improvements in her oldest son that she did not think were possible.

“It’s just a great opportunity for him,” she said.

Lowder said every student has to go through an admissions process before they are admitted into the school, including students who have been awarded a scholarship or grant. The scholarship and grant funds do not cover the total cost of attending the school, so every family who attends North Hills still makes a financial commitment.

Ekima Whisonant said it was exciting to meet Foxx. She told Foxx that she felt honored that her son received the scholarship.

“I know that I’m truly blessed,” she said.