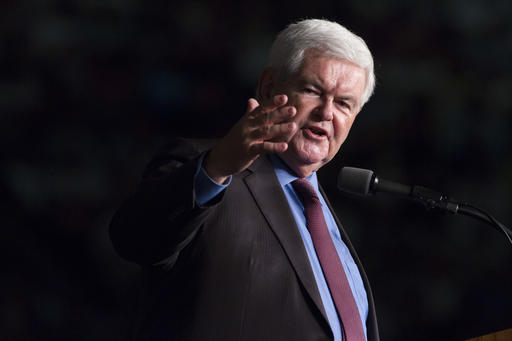 If Megyn Kelly were fascinated with sex, as Newt Gingrich charged Tuesday on her Fox News show, she might have pointed out that the former House speaker was cheating on his second wife during Bill Clinton’s impeachment hearings.

She might have added that Gingrich left his first wife for a 28-year-old congressional aide whom he started seeing while his first wife, Jackie Battley Gingrich, had cancer.

She could have mentioned that Marianne Gingrich (second wife) told ABC News in 2012 that Newt asked her to have an open marriage. (Sex with more people!)

Or that Gingrich eventually left his second wife for his third wife, Callista Gingrich, another congressional aide with whom he had an extramarital affair.

Or maybe she knew what we all know: It’s neither newsworthy nor an insult to say a white, heterosexual man is fascinated with sex.

It’s as old as time, this fascination. It’s the natural order of things, in fact. Lots of affairs? Nothing to see here, folks. Move along.

Women, on the other hand, ought to know better. If a woman so much as, oh, say, reports a news story about multiple accusations of groping and sexual assault against a presidential candidate two weeks before an election, she has sullied herself.

“You are fascinated with sex and you don’t care about public policy,” Gingrich said to Kelly.

Speaking of things that are as old as time.“During the Victorian period, the idea of female passionlessness came to identify ideal womanhood,” Carolyn Bronstein, associate professor at DePaul University, told me during a 2012 interview. “An ideal woman had no sexual feeling, no biological urges, didn’t have orgasms. She was above sex.”

We were talking about Rush Limbaugh calling Georgetown law student Sandra Fluke a “slut” and a “prostitute” in response to her advocating for more insurance coverage for birth control.

“A truly pure and fine woman only engaged in sex in the most sparing ways when conception was desired,” Bronstein said. “There was no passion and no enjoyment. The only contrast that existed was a fallen woman — a slut. You were bawdy and loved sex and you had no credibility. You were the lowest sort of citizen.”

After four minutes of back-and-forth between Gingrich and Kelly about Donald Trump’s chance of winning the Nov. 8 election, Gingrich accused the media, including Kelly, of under-covering Hillary Clinton’s speeches and over-covering Trump’s “Access Hollywood” tape, during which Trump brags about forcing himself on women.

“If Trump is a sexual predator, that is … “ Kelly started to say.

“He’s not a sexual predator,” Gingrich interrupted. “You can’t say that. You could not defend that statement. Now, I’m sick and tired of people, like you, using language that’s inflammatory that’s not true.”

Kelly defended her “if” statement, pointing out that neither of them know whether Trump is a sexual predator, but that it’s newsworthy that multiple women have said as much. “As a media story,” she said, “we don’t get to say the 10 women are lying. We have to cover that story, sir.”

That’s when Gingrich accused Kelly of being fascinated by sex.

“You know what, Mr. Speaker,” she answered. “I’m not fascinated by sex. But I am fascinated by the protection of women and understanding what we’re getting in the Oval Office.”

Trump’s surrogates don’t want anyone talking about the sexual assault allegations lodged against him. It’s no surprise they’re using every tactic in their playbooks to shut up the people who defy their wishes.

And Tuesday, Gingrich tried the oldest play in the book: slut shaming.

Heidi Stevens is a columnist for the Chicago Tribune.

Readers may email her at hstevens@chicagotribune.com.