Little chosen as artist for this year’s Christmas Honor Card 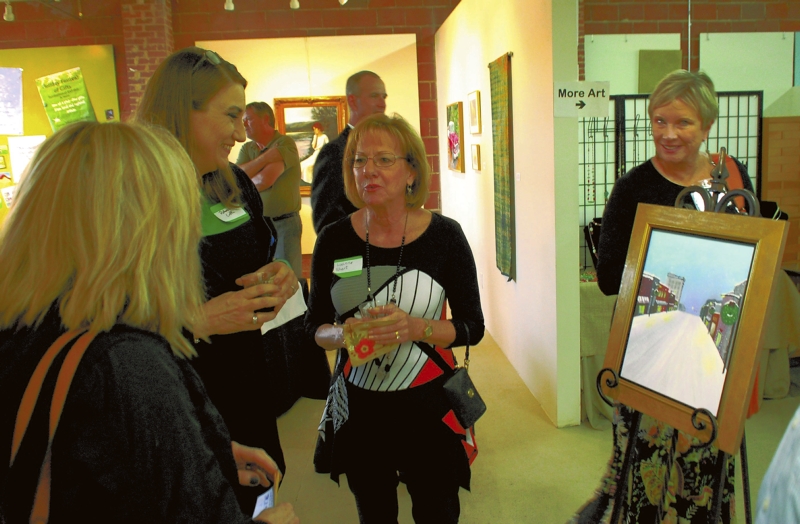 SALISBURY — Rebecca Little normally paints seascapes, so her “Christmas on the Square” was a significant departure.

Little said she was stunned to learn Rowan Helping Ministries chose her oil painting as the art for its 2016 Christmas Honor Card, which is being distributed to local businesses and F&M Banks in Rowan County today.

“You could have knocked me over with a feather,” Little said Tuesday evening at a reception in her honor at the Railwalk Artists’ Gallery. “… It’s a huge, huge honor.”

Little’s is the 24th Christmas Honor Card, which from its inception in 1993 has combined the talents of local artists with the mission of Rowan Helping Ministries,

These special Christmas cards honor their recipients and raise money for RHM. Grubb said the cards can raise upwards of $40,000 a year at times, and overall the cards have accounted for close to $700,000 in contributions over the years.

They sell for $5 each, and thousands are printed each year. This year’s printer was Diversified Graphics of Salisbury.

Some people receive cards but make a larger donation, and for many Rowan Countians the only cards they send are Christmas Honor Cards.

Little, who works at Pyrotek on Grace Church Road, says painting has always been a hobby, and her go-to medium is oil.

On a snowy winter day earlier this year, when the Christmas star was still hanging in the middle of the Square in downtown Salisbury, Little drove home on Main Street. She liked how the streetscape looked toward the Square from the 200 block of South Main Street, and she drove around the block several times until she could stop so no cars were behind her.

“It was cold y’all,” Little told the reception crowd Tuesday evening. “Anybody watching had to think I was an absolute loon.”

Little hung out the driver’s side window of her car, took a photograph and immediately went home and started painting from the picture.

She knew she wanted to enter her artwork in RHM’s annual competition for the card. A member of Salisbury-Rowan Runners, Little said her group often has races that benefit RHM, and she is familiar with its mission.

“I’ve seen firsthand what they can do,” she said.

“Christmas on the Square” can be interpreted two ways, Little said. You might look at it and see cheer, happiness and places to buy gifts.

But it could give a homeless person a sense of loneliness. He or she might look at the scene and wonder where a good place to sleep would be. “What we take for granted every day — they don’t have that,” Little said.

People on hand to celebrate with Little included her son and daughter, a cousin, friends and coworkers. Little said she was stunned to be included with some of the past artists who have been selected.

“It’s one of my most proud accomplishments,” Peninger said of her 2014 Christmas Honor Card, “Love Came Down at Christmas.”

Besides Little’s card, RHM also was selling cards from past years at 10 for $100.