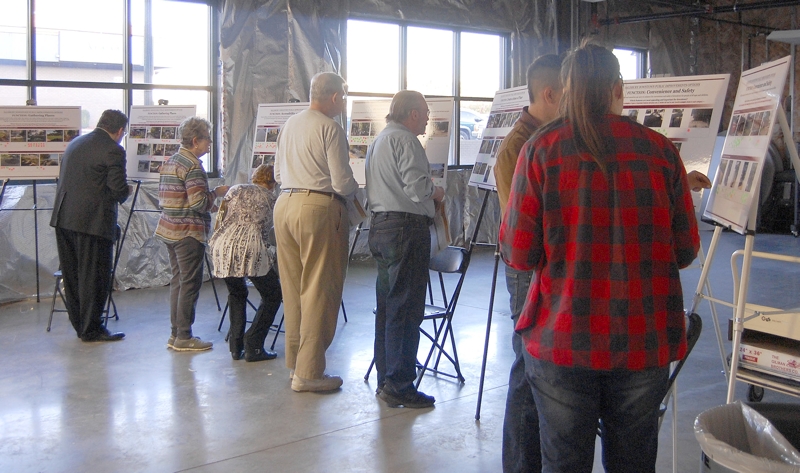 Amanda Raymond/Salisbury Post Downtown Salisbury, Inc. hosted the second session of its Open House Series on Public Improvements on Tuesday at the Salisbury Business Center. Attendees placed stickers on the items they liked that other cities have used in their downtowns.

SALISBURY — Downtown Salisbury Inc. asked for public input on downtown improvements during the second session of its Open House Series on Public Improvements at the Salisbury Business Center on Tuesday.

The organization gathered and organized all of the input they got from focus group research conducted last year, the first public session hosted in June and the public input session DSI hosted with Bounce City in September to present at Tuesday’s session.

The goal of this session was for the public to give their opinion on the downtown improvement options.

There were poster boards set up depicting examples of different aspects of downtowns across the country, such as styles of outdoor gathering places and walkways. Attendees placed stickers by the things they liked.

They also filled out surveys and indicated where they live and work on another board.

Paula Bohland, executive director of DSI, said the aspects that people picked out will not look exactly like the pictures they saw on the boards, but will serve as guidelines for what can be done in Salisbury.

John Schaffer, one of the attendees, said he liked the aspects that would benefit the most people while keeping with Salisbury’s historic atmosphere.

“Some of these things are very attractive, but somewhat unusual (for Salisbury),” he said.

Eli Duncan, another attendee, said he likes to walk downtown so some of the aspects from other towns that he liked were seating options and public bathrooms. He also said he liked the design options for the sidewalk paving and parks.

Eli’s sister Emma said she would like to keep Salisbury’s historic look but add in a little more color.

“I really just like how vibrant the pictures were,” she said.

Alexander said she was glad to see that city officials, business owners and families attended.

“It’s really exciting to have all these diverse views presented,” she said.

Alexander said she would like to see a more pedestrian-friendly downtown, with benches, shade trees, increased lighting and slower traffic.

She said she liked the way DSI was conducting the input sessions because anonymous responses allowed people to feel more relaxed about giving their opinions.

DSI is working with the Centralina Council of Governments for improving downtown. For more information, visit downtownsalisburync.com.