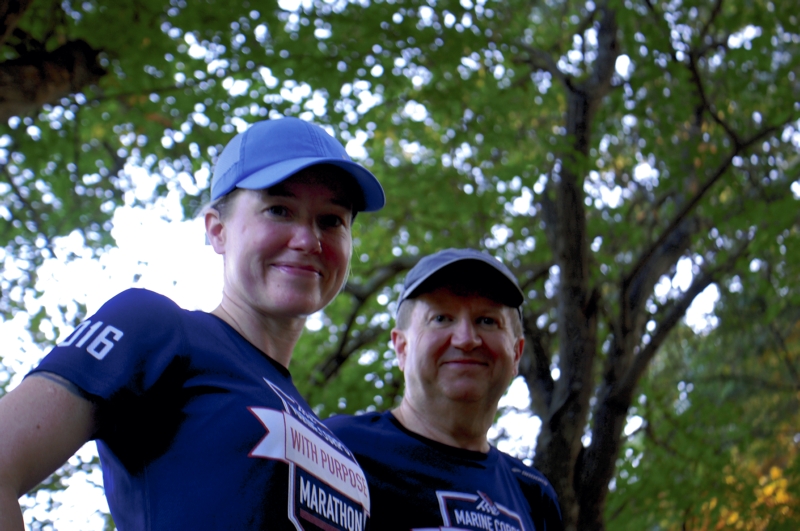 Tara Smith and her father, Gary Burleyson, will be running together in the Marine Corps Marathon Oct. 30 in Washington, D.C. Mark Wineka/Salisbury Post

SALISBURY — In the U.S. Marine Corps, Tara B. Smith used to load bombs and rockets onto F-18 fighter planes. Smith says serving in the Marine Corps from 1997-2001 was the hardest thing she had ever done.

“It changed my life,” she says.

Today, Smith is a 39-year-old wife, mother of two and assistant store manager at the Food Lion on Statesville Boulevard. Much of the year, she has been coping with a major remodeling at the store, and outside of work, training for her first marathon — maybe the second hardest thing she has ever done.

But the training has represented a special time for Smith because much of it has been spent with her father, 60-year Gary Burleyson, who says the proudest day of his life was seeing Tara march onto the parade ground at Parris Island after she had completed her basic training.

“It’s been amazing,” Smith says of their time together. “We talk about so much while we run. It’s been wonderful.”

The father and daughter aren’t training for just any marathon. They are preparing for the 41st Marine Corps Marathon in Washington, D.C., Oct. 30. This will be Burleyson’s third Marine Corps Marathon, and he couldn’t help but think of Tara — his Marine daughter — each time he ran it in the past.

So when Smith suggested earlier this year they run the 26.2-mile race together, “what are you supposed to do?” Burleyson asks. His answer came quickly and, of course, it was “yes.”

There was still a potential stumbling block. The Marine Corps Marathon is limited to 30,000 participants, and a lottery is held each year to decide who’s in and who’s out. It was hardly a guarantee both Tara and Gary would survive the lottery, or even that either one of them would be selected.

At the end of March, on the same day, both father and daughter received confirmation emails saying they were in.

Early in the year, Smith and Burleyson had started taking runs together with the Marine Corps Marathon as something in the back of their minds.

Gary, a nurse and surgery case manager at the Hefner VA Medical Center in Salisbury, is the more experienced runner. He was hardly interested before 2010, but his wife’s own running and encouragement finally took hold.

Burleyson found he enjoyed the physical benefits and feelings of accomplishment. He often tells Tara running isn’t about the speed, rather it’s about conquering the distance.

Since he started running, Burleyson has dropped 40 pounds, but he gives as much credit to changes in his diet. The message has not been lost on Tara.

“I haven’t had a doughnut since January,” she complains.

The 5-foot-3 Smith has dropped 20 pounds this year and is now a marathon-fighting weight of 108.

When you’re getting ready for a marathon, it’s important to follow a training program, and Gary was familiar with different regimens. He took several ideas and molded them for Tara and her schedule.

Because of the renovations at the Food Lion store, Smith had few days off, and her hours were longer. Smith knew a commitment to the marathon also meant time away from her family.

The father and daughter found themselves on their own running schedules during the week, then getting together for longer distance runs on the weekends. Tara was frequently calling her dad for advice during the week and getting tips on running, eating and hydrating.

Just two weeks ago, they did a 26-mile training run together.

Their route took them from Hurley School Road at U.S. 70 to the Bojangles in Spencer. In between, they covered numerous Salisbury neighborhoods — from Milford Hills to Fulton Heights.

The marathon course will be much different and more awe-inspiring in Washington, a city Smith has never visited. The runners start in Arlington, Va., between the Pentagon and Arlington National Cemetery, and their route takes them by many national parks and monuments, into Georgetown, down the National Mall and along the Potomac Parkway.

The marathon ends at the iconic U.S. Marine Corps War Memorial, which depicts the raising of the American flag at Iwo Jima.

The Marine Corps Marathon is the fourth largest marathon in the United States and the ninth biggest in the world. Runners from every state and more than 50 countries are participating.

It is somewhat different in that no prize money is offered. Instead, the marathon organizers say it is meant to celebrate the honor, courage and commitment of all the finishers.

As they have prepared, Smith and Burleyson sometimes match with their official training T-shirts, which carry the words “With Purpose” dead center in the chest. It’s part of an overall Marine message of shared sacrifice that states, “Run with purpose, finish with pride.”

The race showcases the organizational skill of the Marine Corps, as more than 2,000 Marines and sailors are involved in executing the event, nicknamed “The People’s Marathon.”

A howitzer is fired, signaling the start of the marathon at 7:55 a.m., and runners must maintain a pace of at least 14-minute miles to finish.

Smith says the the months of training in the summer heat proved to be the toughest for her. “If you weren’t hydrated, you weren’t going to make it,” she says. On the summer days they were running together, Smith and Burleyson started their runs at 5 a.m. so they could be finished before temperatures became too oppressive.

Because of her work schedule during the week, Smith often ran in the evenings in her Greenleigh neighborhood, or she covered a nine-mile roundtrip between Hurley School Road and Ketner Center.

Smith also spent an hour or two on the treadmill, and sometimes she and Burleyson would run indoors at the Y to beat the heat.

They each came to average 25 to 40 miles a week on their own.

“I brought him home.”

Going into the marathon, Burleyson and Smith are sticking with their regular diet of lean meat and vegetables and staying away from carbohydrates such as bread, pasta and rice. Some runners like to load up on carbohydrates in the days before the race, but Burleyson prefers protein and fat.

The father and daughter will run the whole marathon together. They figure the course will take them four-and-a-half to five hours to complete.

As always, Gary knows the running is about conquering the distance, and it will be nice to do it with Tara by his side. He’ll be as proud as when she marched onto the parade ground at Parris Island.

“We’ll get there at the same time,” he says.