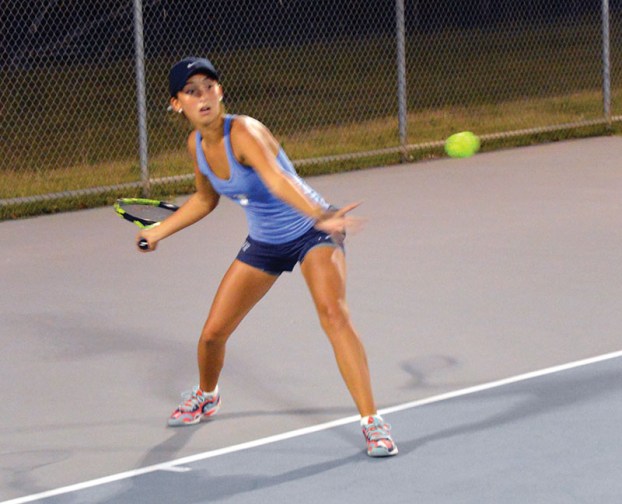 MOUNT ULLA — West Rowan hasn’t experienced a winning girls tennis season in a while, but the Falcons (10-4) will head to the mountains today to play Canton Pisgah (14-1) in a 3A playoff match.
“I knew this team had some potential,” West coach Jonathan Brown said. “Before the season started, I didn’t think we’d do quite as well as we have, but we’ve played pretty consistent tennis.”
West went 6-3 in league matches and tied for third in the South Piedmont Conference with Carson and Cox Mill. Concord went undefeated in the SPC. East Rowan lost only to Concord and finished second.
Brown said the Falcons played their strongest match when they won, 6-3, against Cox Mill on Oct. 3.
West has two seniors — MacKenzie Koontz and Amber White — and the Falcons have gotten a boost from freshmen Skylar Jahnke, Mira White and Madison Smith.
The standout is sophomore Payton Holt, who is 17-5 in singles and is 10-1 pairing with Koontz at No. 1 doubles. Their lone loss was a 10-6 struggle against Concord’s 3A Midwest Regional champion team of Molly Handler/Maya Haynes.
“I think we came as close against them as anyone has,” Holt said.
With a fourth-place regional finish, Holt qualified over the weekend for her second 3A state individual tournament. She’s excited about that. The regional competition, including players from teams such as Marvin Ridge and Weddington, was stout.
Payton lost to Concord’s Kate Earnhardt, a contender for the state championship, in the regional semifinals. Holt also lost to Earnhardt in the regular season and in the SPC tournament final.
Earnhart, a junior, switched from homeschooling to attending Concord a couple of matches into this season, and transformed Concord from a good team to a powerful one.
“When Kate dropped into our conference, it changed things,” Brown said. “Concord has some other very good players, but the conference probably would’ve been Payton’s this year.”
Like wrestling, tennis is an individual sport played in a team framework. Team success has been the aspect that’s excited Holt the most about this season.
“I’ve been very happy with our outcomes,” Holt said. “We’ve been a whole lot better than were were last year, and it’s important to get those team wins.”
Holt’s parents, Todd and Stephanie, are 1997 West graduates. Todd played varsity baseball, football and basketball for the Falcons. He had some double-figure basketball games in the 1996 season and was one of the reserves on a deep 1997 team. He played in West’s victory in the 1997 2A state championship game victory against Wallace-Rose Hill.
Neither Todd nor Stephanie has a tennis-playing background, so it was surprising when Payton showed an early aptitude for the game.
“We encouraged her to do a lot of different things, and she tried a lot of sports,” Todd said. “Basketball and tennis were the two things that stuck. She was a good 3-point shooter, but she didn’t like it when people got up close to her on defense.”
Payton was introduced to tennis at a Mooresville clinic when she was 8. By age 10, she knew it was a sport she had a chance to be really good at, and it became her passion.
Basketball gradually gave way to tennis, and tennis is a sport Payton has pursued year-round with a purpose for the last six years.
“I fell in love with tennis, and I always worked as hard as I can and do everything that I can to get better at it,” Payton said. “I’ve set goals for myself, like playing college tennis, and I just want to keep improving.”
Holt is only 5-foot-3, but she’s a hustler and she hits the ball hard. She can “whale it,” is the way Brown describes it.
On Tuesdays and Thursdays during the season, Holt practiced with the Falcons until 5 p.m. and then headed to the Lake Norman area for individualized coaching and additional tennis work.
Holt has played in four USTA tennis tournaments this fall. She reached the finals in all four and won two.
“It’s unusual for a school like West Rowan to have a year-round tennis player,” Brown said. “But tennis is her thing, and she’s played an awful lot of tennis for someone who is a sophomore.”
Holt will turn 16 on Dec. 28. She’s looking forward to a driver’s license, and she likes dogs, the mountains and watching basketball games.
But mostly she likes winning tennis matches.
“She’s pretty driven,” Todd said.
•••
In other 3A first-round matchups today, Carson is at Asheville and East Rowan is at home against Forestview. In 2A, Salisbury hosts Brevard. In 4A, Davie County hosts Ardrey Kell. One of Holt’s two regular-season losses was to Davie’s regional champ Laura Becker.

From staff reports West Rowan sophomore Payton Holt is a singles qualifier for the 3A individual tennis state championships that... read more