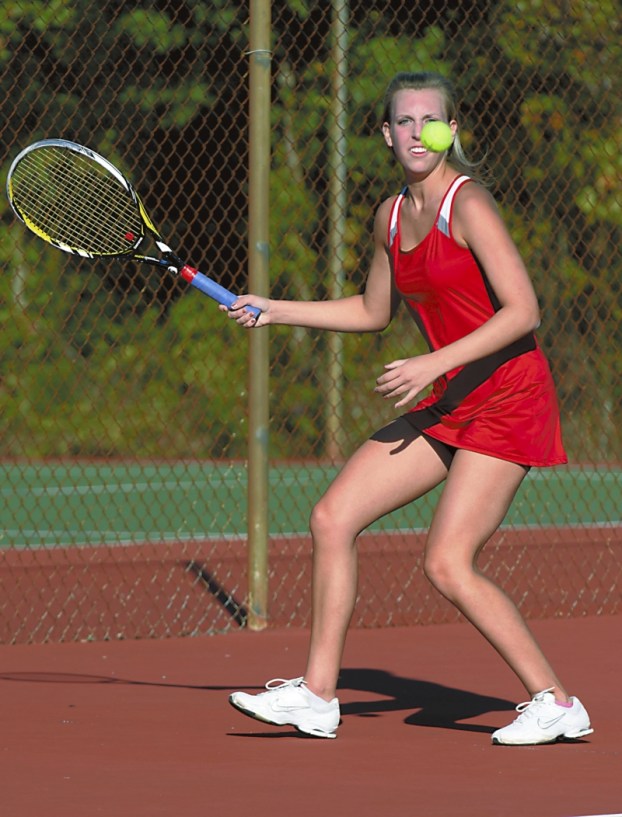 East Rowan's Angel Scialdone playing No. 2 singles on Tuesday against Gastonia Forestview. Photo by Wayne Hinshaw, for the Salisbury Post

Prep Girls Tennis: East wins over Forestview in first round Wayne Hinshaw/for the Salisbury Post …
East Rowan’s Mia Graham, won her match at No. 4 singles and teamed with Kristen Brady to win at No. 3 doubles on Tuesday against Forestview.

GRANITE QUARRY — Darkness was descending, her teammates were getting antsy, and her opponent seemed tireless, but East Rowan sophomore Lauren Weisensel never got flustered.
Weisensel’s 5-7, 6-4, 6-3 win at No. 3 singles keyed East’s first-round 3A playoff victory over Gastonia Forestview on Tuesday.
“I tried to be proactive, but mostly I just had to be very patient and wait for her (Kyra Jentzsch) to make a few mistakes,” Weinsensel said.
Warmups started on East’s home courts at Erwin Middle School at 3:30 p.m., and matches were under way at 3:45 p.m. It’s a good thing they started early on unlighted courts. Weinsensel played all day — and then some. The sun was down at 6:30 p.m., and there were only slivers of daylight remaining when she finished her own match — and her team’s match — by calmly watching a ball sail wide right.
Weisensel gave East a hard-earned 5-2 victory and rendered No. 1 and No. 2 doubles unnecessary.
“Looking at the scores and stats before the match, we knew it would be very even,” East coach Jason Causby said. “And when you get those even matches that’s when you fear not having enough daylight. If we’d had to move to another site to finish, it might have killed our momentum.”
Weinsensel got off to the sort of slow start that gave Causby, the former Salisbury High boys basketball coach, a few gray hairs.
“Lauren was struggling, playing poorly by her standards,” Causby said.
Weisensel got down 3-0 in the first set, but she fought back before losing, 7-5. The second set was a long, tough grind, but she pulled it out. Then she trailed 3-0 in the final set before storming back one more time.
“For her to win two tough sets back-to-back like that says a lot about her,” Causby said. “It showed how competitive she is and what kind of athlete she is.”
Had Weisensel lost, East’s lead would’ve been cut to 4-3 and the other two doubles matches would’ve been played on lighted courts either at Rockwell Elementary or Granite Quarry Elementary.
Causy said his team has been successful this season (9-2) because of its depth.
“Just about everyone we played has at two good players,” Causby said. “But there’s not a lot of difference for us from 3 to 5, and we’ve usually won their three matches.”
That was the case again on Tuesday.
East’s No. 1 player Katie Barnes lost 6-4, 6-1 to Elsa Schuls.
But East won swift matches at 4, 5 and 6 to take a 3-1 lead.
Junior Mia Graham was the winner at No. 4. She had some nerves to deal with because it was the playoffs, but she pushed through the first set (6-3) and stayed in charge in the second (6-1).
“I was mostly worried about the mental aspect,” Graham said. “But I kept my head in it and placed the ball well.”
At No. 5, senior Shannon Mahaffey was a 6-2, 6-2 winner.
“The girl I was playing was very good,” Mahaffey said. “She was running me all over the place, so I had to really think about where I wanted to put the ball. Fortunately, my serves were good today. That helped.”
East’s No. 6 player was a surprise because sophomore Kristen Brady missed a lot of the season after suffering a hip flexor injury in mid-September. But Brady won 6-0, 6-0 in just 45 minutes.
“I got hurt and missed a lot of matches,” Brady said. “This was my comeback today.”
After sweeping the back courts, East stayed ahead 3-1 forever. While Weinsensel and Jentzsch dueled on the far court at No. 3 singles, the struggle next to them at No. 2 between East’s Angel Scialdone and Forestview’s Erin Sullivan was equally compelling and took nearly as long.
Sullivan finally won 4-6, 6-2, 7-5 to bring the Jaguars (7-4) within 3-2.
They’d started No. 3 doubles while the two marathon singles matches were still in progress, and it didn’t take East long to win there. Graham and Brady haven’t played together often, but both were having a good day, and East breezed, 10-0.
“Brady hasn’t played in almost a month and a half, but she was as important today as anyone,” Causby said. “She was essential to us winning.”
The No. 3 doubles win made it 4-2 East, and then everyone gathered to watch Weisensel. She did what she needed to do to send East supporters home happy.
“When you can hear your teammates cheering for you, you want to hang on,” Weisensel said.
•••
NOTES: In other 3A first-round matches, West Rowan lost at Pisgah, 5-3, and Carson lost at Asheville, 6-2. … East will play in the second round Tuesday against Kings Mountain (road) or Cuthbertson (home). … Causby is enjoying his first year coaching tennis, but he’s finding it a different from basketball. “In tennis, it’s not like I can pump my fist when someone makes a good shot,” Causby said. “And the girls can’t yell, ‘In your face.'” … Weisensel is one of the county’s best athletes in the sophomore class. She also stands out in soccer and basketball.
•••
Singles
1. Schuls (FV) d. Barnes 6-4, 6-1; 2. Sullivan (FV) d. Scialdone 4-6, 6-2, 7-5; 3. Weisensel (ER) d. Jentzsch 5-7, 6-4, 6-3; 4. Graham (ER) d. Stroupe 6-3, 6-1; 5. Mahaffey (ER) d. Bookather 6-2, 6-2; 6. Brady (ER) d. Roney 6-0, 6-0.
Doubles
1. Not played. 2. Not played. 3. Graham/Brady (ER) d. Bookather/Roney 10-0.