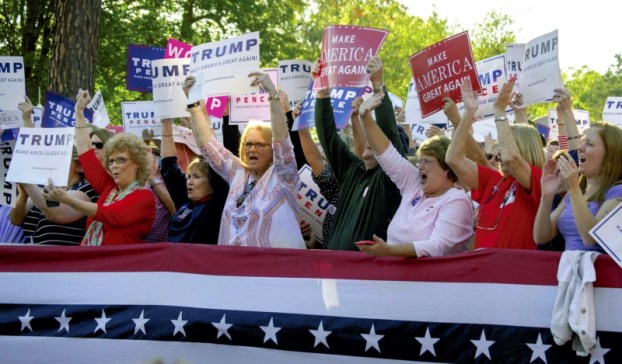 Pence rally crowd offers many for GOP ticket, some against and a few still undecided

SALISBURY — With the election two weeks away, Tanner Whitt remains in the information-gathering mode.

This will be the first time Whitt, a junior at Catawba College, has voted in a presidential election, and he decided to attend a rally on campus Monday afternoon for Republican vice presidential nominee Mike Pence with an open mind.

“I’m still kind of deciding,”  Whitt said. “Both parties obviously have their weaknesses, but they have strengths, too.”

Whitt says he has heard good ideas from both the Democratic and Republican tickets this year, but he wishes both sides would focus more on the positives and present a bigger picture for the country overall.

As for Catawba College serving as host for a partisan political rally, Whitt said, “It’s pretty cool.” For a small school, it was a big deal and good national exposure, he said.

Within the large crowd of people attending the Pence rally Monday, an undecided Whitt was definitely in the minority in what mostly was a Donald Trump-Mike Pence lovefest.

As Pence gave a 30-minute talk outside the Robertson College Community Center, the crowd was busy with applause, the holding up of Trump-Pence signs, the taking of cellphone pictures and chants of “Trump,” “Trump,” “Trump” to drown out any efforts to bring up Democrat Hillary Clinton’s name.

Close to 50 Catawba College students, many of them members of the Black Student Union, peacefully attended and protested Pence’s appearance. Toward the end of Pence’s speech, they quietly walked out, each with one arm and a clenched fist raised.

Dressed in black, the student protesters had entered as a group. After leaving the rally, they walked in a line to a position across West Innes Street, where they assembled and chanted things such as “Hillary” and “Catawba says no.”

Alexis Beverly, president of the Black Student Union, said she was approached by students who had heard about the rally and said, “Hey, I have a problem with this.”

“We had no choice but to come,” Beverly said.

She stressed that the black clothing students were wearing was not a color of hate, but a color of unity. And they had no plans to disrupt the rally.

Darryl Bell, a Catawba senior, was among the protesters and said the Pence rally was “not a joyous event.”

Dr. Gary Freeze, a history professor at the college, met with the students before they entered the rally grounds and reminded them to be respectful and follow the Catawba College Honor Code. Sarah Grace, one of the protesting students, said she worked for the Clinton campaign and was not happy her school had chosen to be host for a partisan rally.

“I think if both parties were represented it would be more fair,” Grace said.

As people waited in line for the rally Monday, local Republican workers, wearing T-shirts that said, “Ask me how to vote,” also handed out Trump-Pence stickers.

The rally drew GOP supporters from Rowan County and much farther away.

“You got to stand and fight,” he said. “They stand for the core values that made our country strong and great.”

To Hightower, the presidential race has come down to  which candidate, guided by the U.S. Constitution, will preserve, support and protect the country.

“And Hillary (Clinton) won’t get it done,” Hightower said.

Lori Spargo of Gastonia said voters would be throwing away “a tremendous opportunity to do the country a huge favor” if they didn’t elect the Trump-Pence ticket.

“I love Mike Pence,” Spargo said. “I definitely want to show support for this ticket.”

The issues at hand, Spargo said, included education, crime, terrorists, justices on the Supreme Court and the Constitution and how it’s interpreted. “People died for it, and brilliant people wrote it,” Spargo said. “It’s not a living document.”

George Dewbrew of Lexington said Pence is a good man, a fine Christian and an asset to Trump who will continue to pound away at Clinton. Dewbrew said Trump is not part of the establishment.

‘He’s saying what we’d all like to say,” Dewbrew added.

Sisters Teresa Knight and Bonita Queen of Salisbury attended the Pence rally together. Issues such as religion, abortion, freedom, morals and protection of the Second Amendment have made them Trump-Pence supporters, they said, and they suggested there was a media conspiracy in favor of Clinton.

As for Clinton’s chance to become the first woman president, “That doesn’t make a difference to me, Hillary’s being a woman,” Knight said.

Gerald Marion of Mocksville said he’ll be voting for the Trump-Pence ticket, and he was attending the Pence rally for affirmation more than anything.

“I hope to hear more of what I’ve heard, and make sure I’ve heard him right the first time,” Marion said.

Rob and Patty Arthur were attending a political rally for the first time. Rob said he took a half day off from work so he could make it. Patty said the vice presidential candidates just haven’t had a lot of exposure compared to Trump and Clinton.

Out of the four people on the main tickets, Pence might be the best candidate, Rob Arthur said. “I just want to hear what Mike Pence has to say.”

Judy Harvey of Lexington said Pence was a great speaker, “and I like what he said.”

Harvey is pro-life. She has two children and six grandchildren, and she said it  “is beyond me how anybody” could support abortion, especially of a fetus that is full-term.

“I guess Hillary says, ‘What difference does that make,'” Harvey said.

Jana Wilkinson had been to three Trump rallies before this one for Pence.

“He’s very good, very impressive,” she said. “He’s just so honest and down to earth — a good Christian man, a role model.”

Jim Deal, a World War II veteran, said “that was wonderful” as he was leaving the rally. “I’m 100 percent for him — no other way.”

Jacob Rawson, a senior business administration major at Catawba College,  said he was trying to increase his political knowledge by attending the Pence rally. He saw the event as a great way to publicize Catawba.

Catawba student Nathan Hosack said he attended the rally to observe, “see how it works” and be a better citizen.

Romeo Schneider, another student, said one of the presidential campaign’s disappointments this year has been, “there’s a lot of animosity, and that’s bothersome to me.”