VP nominee Mike Pence: Don’t be fooled, this race is on 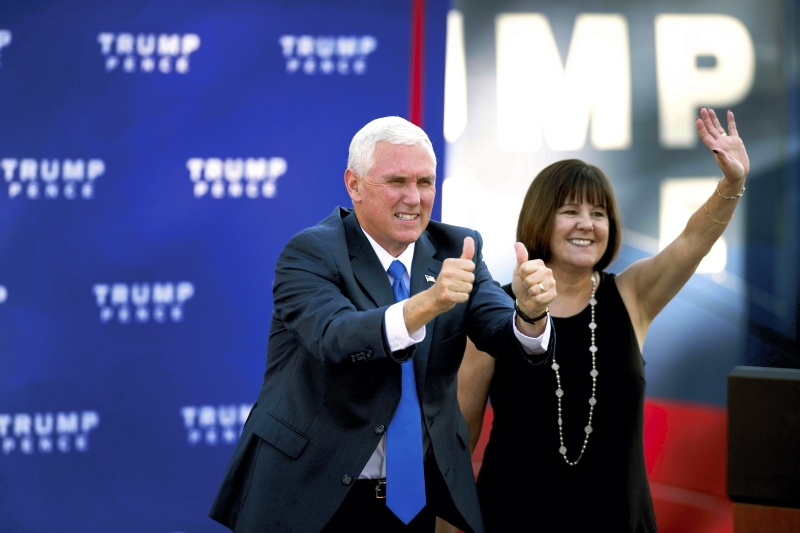 SALISBURY — Railing against the media, Republican vice presidential nominee Mike Pence on Monday said the presidential race isn’t over yet.

Clinton leads by 2.1 points in North Carolina and 5.5 points nationwide, according to the Real Clear Politics average of polls. Pence cited individual polls as proof that the race hasn’t ended yet.

Pence said on some mornings he turns on TV news with a stick because “the national media is doing half of Hillary Clinton’s work for her.”

“But the amazing thing is even though we’re outnumbered on the airwaves we’re winning hearts and minds every single day,” Pence said. “It really is amazing as the media seems to go after every single attack on my running mate.”

His talk about Clinton’s scandals began with a private email server she used when secretary of state. Continuing, he noted that journalist Bob Woodward called the Clinton Foundation “corrupt.”

“I mean you had Bob Woodward on national television yesterday refer to the Clinton Foundation and just say it’s not only unseemly, it’s quote, ‘corrupt,'” Pence said. “Bob Woodward, of Woordward and Bernstein and Watergate fame, couldn’t have said it better.”

Pence promised attendees that, if elected, he and Trump would ensure that comprehensive ethics reform is passed in Congress to “drain the swamp in our nation’s capitol once and for all.”

However, the biggest issue in the 2016 presidential race shouldn’t be ethics, he said. It should be policy ideas, he said. Pence talked about national security, policing and immigration policy. However, he focused a significant amount of time on economic policy.

Pence said the U.S. is in “the weakest economic recovery since the Great Depression.” Electing Clinton would result in “more of the same failed ideas,” he said.

“If you like the status quo, you can keep it,” Pence said, mocking President Barack Obama’s Affordable Care Act promises.

In a state where coal-fired power plants are being shuttered and coal ash has become a hot political topic in the gubernatorial race, Pence also promised that Trump would “end the war on coal.”

Wrapping up the speech, Pence encouraged attendees to “come home” and elect Gov. Pat McCrory and Sen. Richard Burr to another term in office.

“It’s time to come home and come together and do everything in our power to make sure that Hillary Clinton is never elected president of the United States of America,” he said. “Donald Trump and a Republican congress can move this country forward. That’s the choice we have.”

Although he spoke on a college campus, a majority of the attendees were not college students. However, some of the students in attendance said Pence’s speech energized them to vote. “I really liked how (Pence) really put everything into perspective,” she said. “The things that he was talking about are things that I really believe in.”

Ethan Jarrett, a Catawba senior, said he’s also a Trump supporter. Pence’s speech made him more interested in some of the issues discussed Monday, Jarrett said.

Catawba Freshman Aaron Douglas was standing in the crowd of anti-Trump students. He used a simple word to describe his thoughts about Trump and Pence: “trash.”

Douglas, however, probably isn’t the kind of student Pence’s event was aimed at, according to Catawba politics professor Michael Bitzer.

With the exception of Salisbury, Rowan is a “very Republican county,” Bitzer said. Monday’s rally sends a message to rural voters that the Trump-Pence campaign “needs and wants” the support of rural voters, Bitzer said.

He specifically focused on the number 13. Bitzer said 13 of North Carolina’s 100 counties will deliver a significant chunk of the vote. Those counties are the urban ones — heavily populated by Democrats.

“The Republicans, and particularly the Trump campaign, will have to have the rural voters turn out,” Bitzer said.

As for Rowan County, Bitzer’s wager is that it will go for Trump in November.

Rowan Democrats: Trump not fit to step inside White…