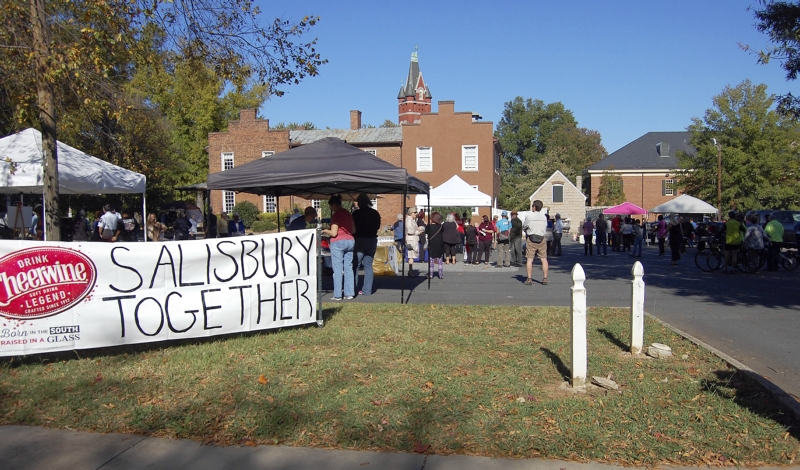 Amanda Raymond/Salisbury Post Salisbury Together, an event organized by Michelle Gray, allowed organizations to share information about their work promoting equality and justice with each other and the community on Sunday.

SALISBURY — Community organizations were able to share information with each other and the public at the Salisbury Together event in the parking lot across from the Rowan Public Library on Sunday.

Michelle Gray organized the event. She said another community that came together to promote unity and support in light of the Black Lives Matter movement inspired her to create an event in Salisbury.

“My heart was to be proactive in the community,” she said.

She spoke with Chase Reynolds, who operates Two Pigs Farm in Cleveland with his sister, about the idea and Reynolds said he would donate four pigs for barbecue if she held the event.

Paula Bohland, executive director of Downtown Salisbury, Inc., helped gather all of the people needed to make the event happen. Different organizations were asked to set up tables at the event to share information with the community.

Gray said many people say that something needs to be done to address issues of inequality and injustice in society, but they may not know that there are organizations that have been working on those issues for years.

“I wanted our community to see the things that are being done,” Gray said.

She also asked that the organizations tell attendees how they could immediately get involved with their work.

There was also a tent set up where attendees could tell their Salisbury Story to Al Heggins. People could talk about what they loved about the city, concerns they had and any solutions they thought could help.

Heggins, owner of the Human Praxis Institute, said people told her about their community work or their desire to get more involved with helping the community.

Through the good and the bad, Heggins said the common thread with everyone who spoke was a love for the city.

“I think the constant thing has been we love Salisbury,” she said.

Heggins recorded all of the stories and said she will put them online. She will also share the recording with the Rowan Public Library for it to be archived for future generations.

Organizations such as the Covenant Community Connection, the city of Salisbury, Downtown Salisbury Inc., Rowan County Cooperative Extension and the Salisbury Police Department all had tables set up in the parking lot. Attendees walked around eating barbecue and talking with the different groups about their work.

Stokes said he was able to introduce himself to a lot of people as the new chief. He was also able to talk with the different groups about how they can work together.

“We talked about how we can use them and how they can use us to further their efforts,” he said.

Doris Brown, president of Christian Women United, said the event allowed her organization to get information out into the community as well as promoting the organization.

“I want the public to know that we at CWU are there to support other organizations in seeking justice,” she said.

Amy-Lynn Albertson, extension director of the Rowan County Cooperative Extension, also said the event was a great way to promote her organization’s efforts.

“We got to talk to a lot of people who didn’t know us,” she said.

Chase Reynolds said it took 14 hours of cook time to get the pigs ready for the event. He and his sister started Two Pigs Farm to unite people around food.

“If one person leaves with a full stomach, it’s very worth it to me,” he said.

Reynolds said said Salisbury Together was a step in the right direction to promote unity.