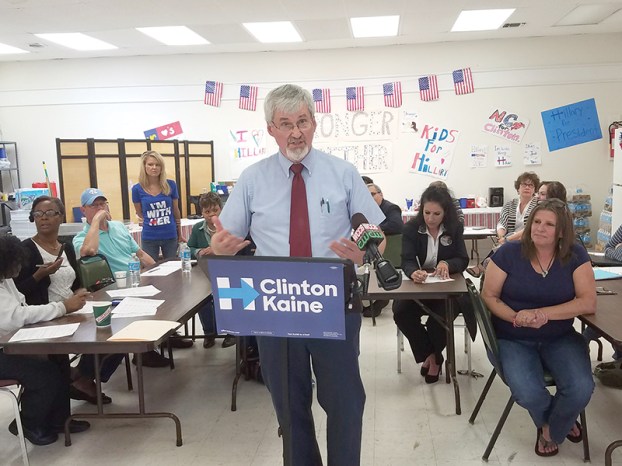 Rowan Democrats: Trump not fit to step inside White House

SALISBURY —Local Democrats on Monday held a news conference to argue that Republican Party presidential nominee Donald Trump’s business and personal past make him unfit to serve as president.

Hoy described the choice facing voters in November as a simple one.

“I would suggest that we do something very basic, very democratic, a small deed, and that’s vote,” Hoy said. “Let’s vote for intelligence, competence, experience, good economic policies so we rebuild infrastructure of our cities, our country.”

He noted an analysis by a former adviser to Sen. John McCain, R-Ariz., which said Trump’s policies would put 3.5 million people out of work.

“John McCain, do you remember? A conservative Republican,” Hoy said. “Here we have Mr. Trump and Mr. Pence trying to sell that kind of economics and that kind of way of life to us, here in Salisbury, North Carolina.”

For her part, Levy went further than simply saying Trump was unfit to serve as president. She listed Trump’s criticism of former Miss Universe Alicia Machado, numerous sexual assault allegations and other disparaging comments toward women as evidence.

“He’s a bully, a misogynist, a con artist and someone who shouldn’t even be allowed to set foot inside of the White House,” Levy said. “In stark contrast, Hillary Clinton has been putting families first for her entire career. She will continue this work as president, fighting every day to ensure that little girls across this globe have the same opportunity as men.”

Levy listed Clinton’s work at the Children’s Defense Fund, the Arkansas Advocates for Children and Families, Clinton’s various actions as first lady, pushing for access to emergency contraception and other items during her time in the U.S. Senate.

“The contrast between Hillary Clinton and Donald Trump couldn’t be clearer,” Levy said.