Man on a mission: First-grader collects food for the hungry 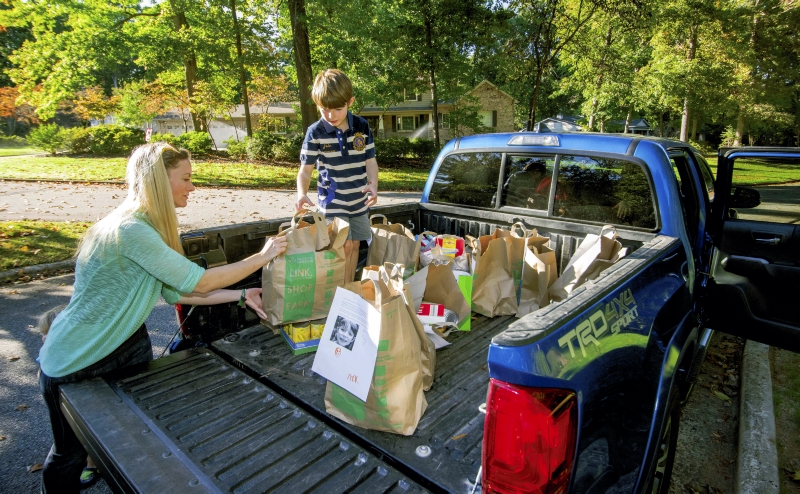 JON C. LAKEY / SALISBURY POST Malcolm Robinson (6) gets some help from his mother Nichole Robinson putting the donations in the back of the family truck after a pickup.

SALISBURY — It’s a week before Halloween, but 6-year-old Malcolm Robinson is already going door to door. He walks up to houses in his neighborhood, dragging a rusted red wagon behind him and knocks on the doors of family friends. But instead of asking people for candy, he’s asking them to donate food for hungry children.

Mother Nichole Robinson said that before he goes to bed, Malcom, known as “Mac” to friends and family, often has a serious thought on his mind.

“One night, he asked me what’s the whole point of life,” she said.

It was a heavy question for a first-grader. She told him that some people in life have a mission, or that they do something to help others — it doesn’t matter what it is, she said, as long as it helps people. It got the wheels turning in his head.

A few days later, environmentally conscious Mac said, “I got it — I’m gonna build a car with no exhaust pipe.”

Nichole and husband, Jed, talked him through the idea, and explained that building a car like that could take some time. He agreed.

At that point, plans for Mac’s seventh birthday party were already underway, and Mac told his parents that this year, he didn’t need any presents — he and his family had enough, he said.

Mac is a quiet, smiling boy who loves the outdoors, does well in school and makes friends easily, Nichole said. And over the past month, he couldn’t shake the idea of finding something he could do to help others. When a conversation about adoption turned into an explanation of childhood hunger, Mac knew what he could do.

“It was just like a light bulb went off in his head,” Jed said.

He told his mom to ask guests to bring food to his birthday party, instead of presents.

“Hopefully, we can collect a lot to give to hungry kids,” he said.

And then, the idea grew further. Mac told his parents he was going to take his wagon and go door to door, telling them about hungry children and asking for donations.

It was a startling declaration from a child who is normally shy, Nichole said. But Mac has called it his mission, and Nichole and Jed have let him take the reins. Nichole collected paper bags, bought one pack of SpaghettiO’s and Meatballs and reached out to Rowan Helping Ministries to see if they would accept the donations — but other than that, Mac has been running the show.

Stapled to each donation bag is a picture of Mac and an explanation — all of them are signed. Family friends have taken some of the bags to work, or to Mac’s old class at St. John’s Lutheran. The rest, he’s hanging on a few doors in his neighborhood.

“He’s so determined despite his being shy,” Nichole said.

Mac has two younger brothers, Liam, 3, and Jack, 2. His parents hope that Mac’s actions will inspire them to set big goals and figure out what they can do, too.

His goal was 200 cans, but by Friday his parents estimated that he’d already exceeded that, just from collections Jed picked up at work and those from close friends. Mac left his bags on doorsteps Friday afternoon, running through the falling leaves with a couple of friends, bags flapping in the wind.

“I think helping is contagious,” Nichole said, watching them. She, Jed, Liam and Jack trailed behind. A few houses already had food ready to donate, but Mac will come back and pick up the rest on Monday — and his party is still to come.

It’s a story that has touched everyone who’s heard it, Nichole said — even friends and family who live out of state.

“I think people really need that right now. Despite everything going on, the turbulence and everything, there’s still so much love,” she said.

Nichole said she felt that Mac was inspired by his favorite book, “The Fire Cat,” about a kitten named Pickles who has big paws and figures out a way he can help others despite his small size. Mac told his parents that he may not be able to build a car that would save the planet.

Anyone can donate to help Mac at http://www.rowanhelpingministries.org/donate. Mark donations for Mac Robinson, and they will be added to his tally.