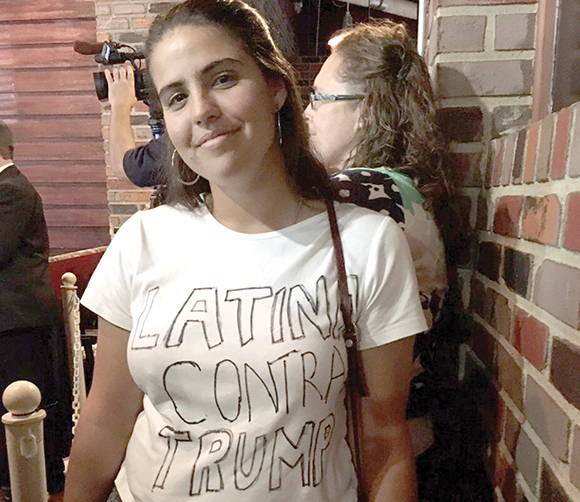 Submitted photo - Annie Cardelle poses for a photo on Friday during a political rally that featured Eric Trump and Lara Trump.

SALISBURY — Within hours after a Republican Party event at West End Plaza, two sisters received more internet fame than they ever expected.

Like the other attendees, the pair of sisters snapped pictures of the Trumps. Annie Cardelle posed for pictures while the Trumps were speaking. Later, they’d be one of the 200 or more people who posed for a photo with the Trumps.

There was one notable difference between the Cardelles and other attendees. Scrawled on Annie Cardelle’s shirt in black marker was the phrase “Latina contra Trump.” “Contra” means against in Spanish.

As they approached Eric and Lara Trump, Annie Cardelle’s sweater obscured the word contra. When they posed for the picture, she pushed the sweater down to reveal the full phrase.

“I was so nervous,” Ceci Cardelle said. “Annie wore a sweater so that we could get in there. And, when she took it off, I was sure they were going to realize what the shirt said … it just got funnier and funnier.”

The sisters posted their photos on Twitter after leaving the rally. The reception was overwhelming. As of Sunday afternoon, photos posted by Ceci Cardelle had more than 70,000 “retweets” and more than 130,000 “likes.” More “likes” and “retweets” were still coming. Annie Cardelle also posted the photos, adding thousands more “retweets” and “likes” to the social media fame.

Ceci Cardelle said she had to turn her phone on “do not disturb” because of the social media attention. Ceci and Annie Cardelle have now been interviewed by multiple national news outlets.

The pair of sisters hadn’t planned to be Twitter superstars. Annie Cardelle said she had talked about attending the Friday rally but didn’t want to be mistaken for supporters. So, she quickly used two black markers to draw the “Latina contra Trump” phrase on a white T-shirt.

“I didn’t even write it out,” she said. “I wasn’t even trying to be neat. I wanted to make it quick and I definitely wanted to put something on the shirt about being Hispanic because (Donald) Trump says that he has the Hispanic vote. He’s really bragging.”

Annie Cardelle said her sister was initially hesitant to attend Friday’s event. Ceci Cardelle said they expected some of the attendees to be people they knew and she didn’t want to cause a scene.

But no one noticed — something that surprised both sisters.

The sisters say they’re primarily opposed to Donald Trump’s candidacy because of the words he uses to describe Latino Americans and other minorities.

“Our problem is not with (Donald) Trump supporters,” Annie Cardelle said. “It’s about Trump himself. It’s not about the policies. It’s about his words and his rhetoric and hate speech.”