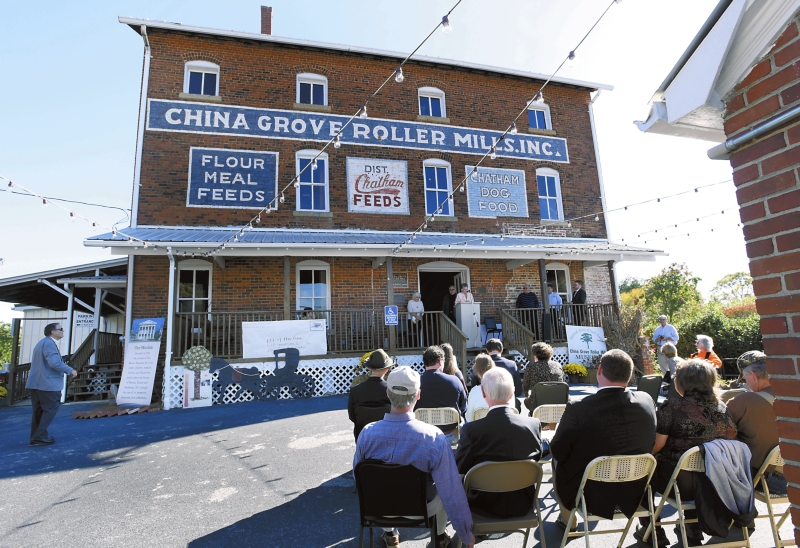 Wayne Hinshaw / for the Salisbury Post The China Grove Roller Mill Ceremonial Key Swap program in 2016, where the historic mill was transferred to the control of Rowan Museum.

The Ceremonial Key Swap  at China Grove Roller Mill on Sunday afternoon was an event where those attending were happy and sad.

On this day, volunteers who worked to save the 125-year-old China Grove Roller Mill were so happy that their effort  saved the mill and its history for future children to enjoy. A job well done. But, sad that the Historical Society of South Rowan has dissolved. Happy that the old mill will continue under the protective arm of the Rowan Museum.

Rowan Museum President Terry Holt spoke to the gathering saying, “This (CG Roller Mill) is not a block of bricks on a hill. This is where people came together to form a community.” Farmers came to the old mill to have their wheat and corn ground into corn meal or flour, to buy produce, to learn the town gossip or news of a death or a birth.

Pastor Mike Goode spoke of a fork in the road. He said that this fork is where two groups, Rowan Museum and the Historical Society of South Rowan, come together and move forward as one.

Society chairwoman Barbara Doby said, “Will I cry? Probably. I cry for the love of the Historical Society. I’m happy to be here to see it change hands.”

Later she said, “God played this roller mill on our heart.”

Laughing, she told the crowd, “I have a cot upstairs and I’m not leaving.”

She added, “ The town had changed, but the mill has stood for 125 years. It has been a most wonderful journey.”

The Historic Society of China Grove was chartered in March 1989, later changing its name to Historical Society of South Rowan. They acquired the CG Roller Mill in November 1996. As an education organization, they wanted to save and promote the heritage of South Rowan.

Judy Haire recapped the history of the society from the purchase of their first building used to house pictures, newspapers and artifacts from the area. Eventually, the funds were raised to purchase the roller mill and move their collections to the mill.

Haire asked the Rowan Museum, “Treat the mill well and love it as we did.”

Time was set aside to share memories of the old mill.

Kay Klutz recalled after the purchase of the mill, “Our first chore was cleaning the mill. We started on the top floor, sweeping and shoveling. We heard a loud motor running and there was a big white cloud flying out the open window. A volunteer had brought in a blower. That white cloud of old flour covered the entire block. We had to stop him. That was a OSHA violation.”

Rev. James Stirewalt remembers coming to the mill as a 13- or 14-year-old with his father on a wagon with sacks of wheat and corn to have it ground. “With the wagon pulled up to the porch to unload, we got all kinds of information on who died and what crimes had been committed in town. We got a lot of gossip like the story of the St. Marks Lutheran Church minister being suspected of using a short wave radio in his attic to talk to the Germans, when actually he was only playing with his model train.”

Rowan Museum Director Aaron Kepley asked for the help from China Grove volunteers. Kepley said, “I need to keep the China Grove people involved to learn the history of the area. I don’t want to take the roller mill out of the community. We need you to help us. We want all the properties that belong go the museum to do well.”

After an exchange of a very large symbolic door key between Doby and Holt, Holt said, “These two groups have bonded with heart, soul and purpose to never forget the farmers who came here to sale produce that they had produced.”

The society donated $12,000, emptying their savings account to the museum for future upkeep on the mill.

They had some fun doing a ceremonial ceremony known as a “Livey of Seisen.”

In old England, a common law ceremony of  “Turf and Twig” was used when a party was holding a piece of property.   Corriher, while holding a chunk of turf from the roller mill property, Brooke “twitched” him with with a China Berry  twig, making the deal complete with everyone getting a laugh out of the stunt.

The program ended with the unveiling of a new sign in front of the mill by Kepley.

The Rowan Museum now manages four properties including the China Grove Roller Mill, the  Utzman-Chambers House in Salisbury, the Old Stone House in Granite Quarry and the 1854 Rowan County Courthouse in Salisbury.