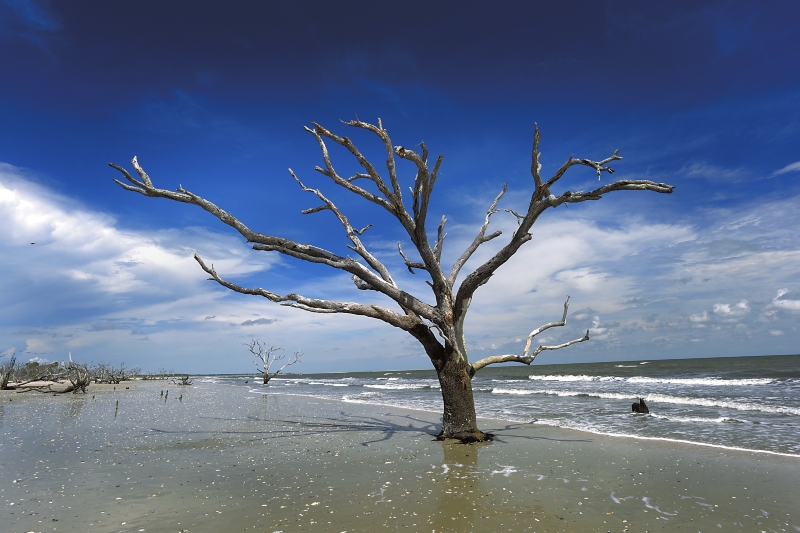 This lone dead tree on the beach at Botany Bay fights to survive the invasion of the sea as foam wraps around. Wayne Hinshaw/For the Salisbury Post

EDISTO ISLAND, S.C. — After  Hurricane Matthew stormed ashore at Edisto Island this past week, I have been concerned about the damage on the island. From news reports I know the island was hard hit with much damage to trees, power lines, and property. At this writing on Tuesday, the island is still closed to traffic even for property owners.

In late summer, before hurricanes target the South Carolina coast, I spent an afternoon on the island at the Botany Bay Plantation, which is a heritage preserve and managed wildlife area. The area has 4,687 acres with the combination of two very large former plantations. The Sea Cloud and the Bleak Hall plantations were started in the 1780s, growing Sea Island cotton and other crops. Now the land is owned by the state of South Carolina and managed by the state’s Department of Natural Resources. Botany Bay was opened to the public in July 2008.

Botany Bay Road, a well-maintained dirt road, is lined with heavy hardwood trees forming a canopy of cover shading the roadway. There is no charge for visiting, but you have to sign in at the gate and receive a map of the 6.5 miles of roads in the plantation and the rules of not taking sea shells from the property.

Parking on land that was once the site of Bleak Hall, the walk to the beach is about a half mile across a salt marsh. On this day it was very hot with the temperature above 90 degrees. While carrying all my camera gear in the heat of the day, I walked slowly, studying the small creatures running around in the black mud of the marsh below me.

The marsh is home to fiddler crabs, periwinkle snails, oysters, clams diamondback terrapins and marsh hens and other larger animals that come to feed.

The salt marsh smells like ‘rotten eggs.” As the sea creatures, animals and the cordgrass die and decompose in the black mud, sulfur gas that accounts for the smell is formed.

The ocean tide was out, so various shorebirds searched the cordgrass and black mud for a meal of the sea creatures. Many shorebirds use the island to feed and rest during their migration. Common birds in the marsh are Black-bellied plover, piping plover, red knot, sanderling and western sandpipers

Overhead, pelicans fly in formation under the deep blue sky that is dotted with white, fluffy clouds. The birds dip and glide effortlessly in the air over the marsh. Oyster beds, uncovered in the marsh, are exposed to the hot sun. A few small dead trees are on the edge of the dirt roadway that crosses the marsh.

Arriving on the beach, hot and wet with perspiration, I thought I had arrived on an outer-space planet. I had never seen any place on earth like this island paradise.

There us no development of any kind to mar the natural beauty of the tree-lined, wide beach of gray sand. The beach sand is carpeted with an abundance of thousands of seashells wet and glistening in the sun.

The living trees on the beach are twisted and gnarled from age and the harsh sea environment. Some trees lean into the wind, while some have given up and are turning their backs to the sea, leaning away from the water. Dead trees line the beach like the “pickup sticks” of a childhood game. Trees have fallen at all angles. Tree roots stand up out of the sand, looking skyward. Dead trees have lost their color due to the bleaching from the hot sun. The fallen trees have mostly gray or white bodies with all their color drained away.

Seashells, seashells, and more seashells dot the sand. Some are broken in a hundred pieces like a giant jigsaw puzzle waiting to be assembled. Some are full, perfect conch shells with their spiral, twisting lines, looking like miniature trumpets in the sand without the shrill sound of the music. Some previous visitor has placed seashells on the side of fallen dead and live trees as well, as if to display nature’s beauty with their structure in lines and colors.

More pelicans fly over me, calling to each other. They seem to be flying reconnaissance missions over the preserve, keeping a close eye on me below. What do their squawks to each other mean?

The snowy-white sea foam marks the line in the sand where the Atlantic Ocean waves have invaded the gray sand of the isolated beach. There stands a tree in the salty ocean water with the foam all around the base of the tree. The tree appears to be dead, but it is putting up a stubborn fight to resist falling into the water like so many of the other trees. It is a fight that the tree cannot win, but I admire the determination of standing tall. Oh, but someday her will powers will have to give in to the sea.

There, in the edge of the salty water, is a black, tarry, gooey material that I have stepped in. Not gooey in a desirable way, but sticky and messy when I step into the goo. It sticks to my shoes like glue. It looks like the barnyard droppings that I so try to avoid getting on my shoes.

I am told that this black material now in the path of ocean waves was once the floor of the salt marsh where hundreds of years of sea creatures and marsh cordgrass decayed, forming a crust. The coastline is always shifting and changing with time, greedily claiming more and more territory.

Kitsie King, a volunteer, who shelters from the sun in a open-sided hut on the beach, is guarding against those who would steal the shells or damage the beach. She tells me that the beach used to be a half mile further out to sea, adding the information that the sea is in constant change. Sometimes during a storm, the entire beach area where I am standing is under water. The strip of beach and the salt marsh are then joined as one until nature can correct itself again.

I can only guess, but during Hurricane Matthew’s assault on this island, most likely that was one of those times when the ocean captured the island and the salt marsh with its waters.

Talking with King, she explains that she had the lettering SCDNR added to her hat. It stand for South Carolina Department of Natural Resources. Her volunteer job is to keep visitors from taking the seashells or trees from the beach. She said she had no real legal authority to stop people, but she thought the lettering on her hat would help her look more official. She was correct; it does.

After spending most of the afternoon on the beach, I  wanted to see where the plantation houses and farms were located over two hundred years ago.

The Bleak Hall plantation house is completely gone now. It burned down and was replaced with a second house that is also now gone.

The old tabby constructed icehouse and the gardener shed remain as do the walls of the barn. The roof of the barn was lost to fire. The icehouse looks like a tiny church with its arched windows and steep roofline. The plantation owner had big blocks of ice shipped down from the north and stored in the icehouse. The ice would last several months in the house.

“When the plantation owner drank his mint juleps each day, that ice cube made it awfully expensive with it being shipped from the North, but then he had millions of dollars to spend on ice,” according to the volunteer gatekeeper.

The icehouse was also a carriage house and was used to dry some crops.

First the Confederate troops, and then the Union troops, used the cupola on top of the original house as a lookout over the North Edisto River during the Civil War. The residents had evacuated to Charleston.

The red brick foundation for the Sea Cloud plantation house is still standing. The third floor of the Sea Cloud house is reported to have had a full ballroom for gatherings and dances.

There are no standing visible remains of any the the slave quarters for either plantation. The slave cabins along Ocella Creek were not so elegant. They were simple rooms, 20 feet by 12 feet with window and door openings on the front with no glass, only shutters for the winter.