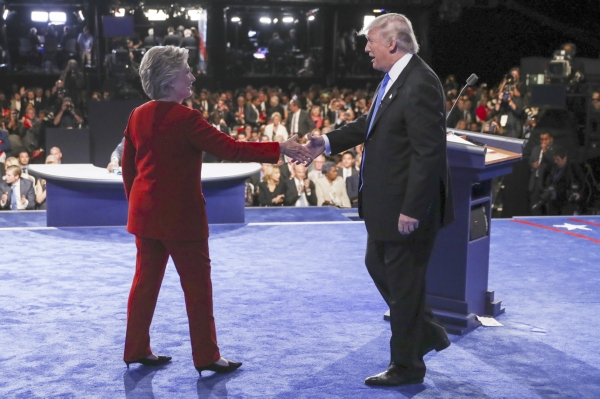 In less than three weeks, either Hillary Clinton or Donald Trump will be elected president of the United States — and if it feels like we’ve already heard enough about sexism and misogyny, get ready: The next four years are going to be filled with bitches, bimbos and nasty women.

And that may be the best thing for women since the 19th Amendment.

This ugly campaign has pushed our country, once again, to talk — with uncomfortable words — about how men treat women. But unlike other moments that have temporarily buoyed this national conversation (Bill Cosby, Roger Ailes … ), this one is guaranteed to continue well past Nov. 8, thanks to the baggage that each candidate carries and regardless of who wins.

If Trump’s recent scorched-earth campaign strategy prevails — and polls show that even as he trails Clinton he’s not out of the running yet — he will be the first U.S. president to have so openly insulted and disparaged women during a national campaign.

Do we need to revisit the highlights?

• About Republican primary challenger Carly Fiorina: “Look at that face. Would anybody vote for that?”

• About Fox News host Megyn Kelly: “She is so average in every way, who the hell wants to woo her!”

• About Clinton, during Wednesday’s debate: “Such a nasty woman.”

• And, of course, the “Access Hollywood” recording where Trump explains the real art of the deal: “Use some Tic Tacs” and “grab them by the p__.”

Would deplorable Donald be any different in the White House? No. He’d be the creep-in-chief and the hero of every office lout in America. But imagine also how often a President Trump would give this country new opportunities (the best!) to wrestle with issues of women’s rights.

Trump’s endless stream of disrespect already has provoked a torrent of fury from women who say he is an outsize embodiment of the sexism that permeates their lives.

Just ask the women in the office, or next door, or at church. Look up #notokay on Twitter. Women have been quietly dealing with Donald Trumps their entire lives —from the leering guy at work who stands too close in the elevator to the pervert who masturbates on the train, women know them all and they’re connecting that kind of behavior to things such as the persistent wage gap and the dearth of women in top jobs. Because they are connected.

So thanks, really, to Donald Trump for being so outrageous that women — and the millions of men who also fight for gender equality —couldn’t stay quiet any longer. It will only get louder if he is elected. And this will be a good thing, believe me.

If Clinton wins, though, will women be much better off? Assuming Trump concedes and doesn’t drag this election into 2017, it’s going to get complicated. Yes, she will be the first female president of the United States, but Clinton will govern a deeply fractured nation, including millions of Americans who voted for Trump — and implicitly endorsed, or tolerated, his sexist words and behavior.

If she wins it will be empowering for young girls and women to see a woman in the White House, just as there was hope of a new, post-racial America when Barack Obama became the nation’s first African-American president. But I fear that the impact may be more polarizing than unifying.

For eight years, President Obama and his family have weathered nonstop racist badgering, from the baseless birther movement to open comparisons of the first family to apes and monkeys. Will a Clinton presidency be similarly blasted with sexist commentary? Roger Stone, a former Trump campaign adviser, has been planting the nasty seeds against Clinton for years, at one point forming an anti-Hillary Clinton group called Citizens United Not Timid. Will she continue to be dismissed as a “bitch,” as many have done, if she moves into the White House, or will she get a chance to govern?

Sadly, too many Americans still struggle with the idea that a woman — or a black person or an Asian or Hispanic or Muslim person — could capably run much of anything, let alone the free world. A President Clinton will be expected to be better than perfect: to govern without a single misstep while looking charming (but not too charming) and being tough (but not too tough) and, naturally, baking cookies for the Oval Office every Tuesday and organizing the staff Christmas party. And that still won’t be enough.

Meanwhile, she’ll be expected to just ignore what’s sure to be a steady din of blatantly misogynistic rhetoric humming on social media, through the alt-right channels and among the good ol’ boys we all know.

Hillary Clinton can stand her ground. She has been playing this “girls get to play but the boys are really in charge” game her entire life — and she hasn’t quit. She has stamina.

What’s more exciting, and inspiring, is to see how many women are showing they can stand their ground, too.

Lara Weber is a member of the Chicago Tribune Editorial Board. Readers may email her at lweber@chicagotribune.com.