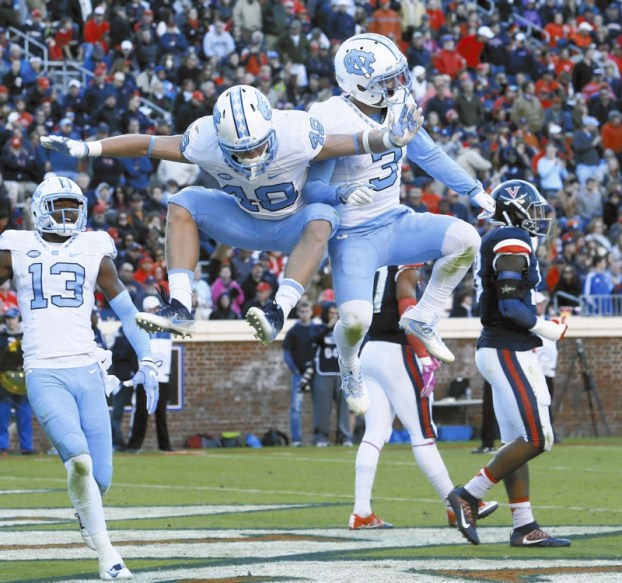 CHARLOTTESVILLE, Va. (AP) — The last time Mitch Trubisky threw a pass in Virginia’s Scott Stadium, two years ago, it was his only play of the game and he hit T.J. Thorpe with less than a minute to play to give North Carolina a victory.

He needed no such dramatics Saturday, throwing three touchdown passes as the No. 22 Tar Heels rode his accurate arm and a strong performance by their defense to a 35-14 victory, their seventh in a row in the series and ninth consecutive in true road games.

“The defense played lights out,” Trubisky said after throwing for 310 yards. “They played a really great game. The second half we had a little bit better tempo and we were moving them. We converted some more third downs and we got some more rhythm.”

Trubisky hit Bug Howard for 40 yards on a trick play, Thomas Jackson for 10 yards and Austin Proehl for 46 yards for touchdowns for the Tar Heels (6-2, 4-1 Atlantic Coast Conference), and the trick play had everyone smiling at how well it worked. On the play, North Carolina set up in a wildcat formation, handed the ball off to wide receiver Ryan Switzer and he pitched it to Trubisky, who just had to make the throw.

“I’ve been waiting for them to call it,” he said of the play, which has been in the game plan for a few weeks.

The Cavaliers (2-5, 1-2) got their first touchdown on a trick play, too. They lined up for a field goal, had the entire offensive line split out far to the left, and snapper Evan Butts threw the snap 30 yards to his left to Matt Johns, the holder now acting as the quarterback.

The Tar Heels led 14-7 at halftime and limited Virginia to 39 yards in the third quarter while opening a 28-7 lead.

“That’s when we felt like we got control of the game,” Tar Heels coach Larry Fedora said. “We hated giving up that 13-play drive (for Virginia’s second touchdown), because at that point, we felt like if we could put the ball in the end zone again, then we could put it away.”

Elijah Hood ran for 107 yards and a 4-yard touchdown, and T.J. Logan scored on a 4-yard run for UNC.

Virginia has lost two in a row, making the upbeat feeling of a two-game winning streak before that seem a distant memory.

“I felt it was necessary with the pressure that was going on Benkert, starting from the second half of the Pitt game through this game, it was wise just to have his step back and have him see it from a different perspective and take a breath and regroup,” Mendenhall said.

North Carolina: The Tar Heels moved back ahead of Virginia Tech in the Coastal Division race by virtue of having one more victory. The Hokies (3-1 in division), however, beat UNC three weeks ago, so they hold the tiebreaker, but either Virginia Tech or Pittsburgh (2-1 in division play) will fall off the pace in the loss column when they meet Thursday night at Heinz Field. The Tar Heels beat the Panthers 37-36 earlier this month on Trubisky’s TD pass with 0:02 remaining.

Virginia: Virginia has now struggled to much offensively for three consecutive halves, including the second half against Pitt last week. The coaches also called several running plays on third-and-medium plays, curious because the Cavaliers could already be playing in nothing-to-lose mode if a bowl game remains their goal. They now need to win four of their last five to make their first bowl game since 2011.