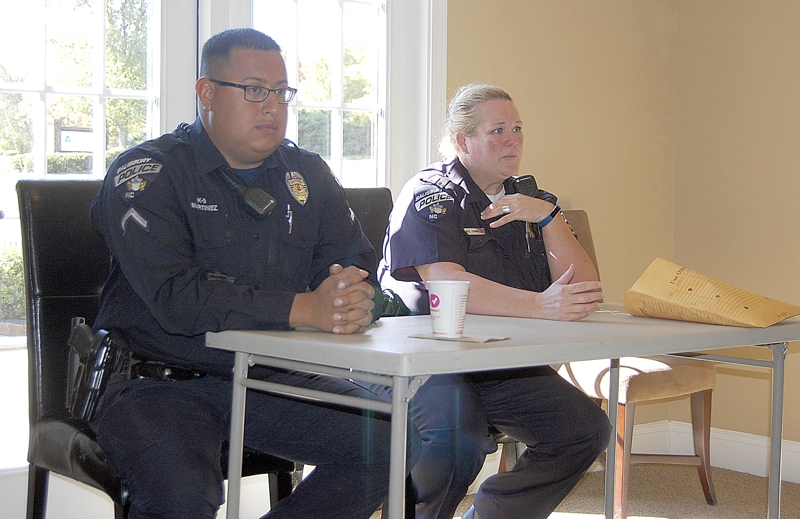 Amanda Raymond/Salisbury Post Captain Melonie Thompson and Officer Joseph Martinez talked with members of the Zeta Phi Beta Sorority and community members about building good relationships between law enforcement and the community during the Cops and Cups event at Lakewood Apartments on Saturday.

The event was focused on children in middle and high school, but anyone from the community was invited to attend.

Alexis Richardson, president of the chapter, said she wanted to be able to bring the event to the community, as opposed to the community going to the sorority’s headquarters.

“We’re excited to be afforded the opportunity to come to the Lakewood community,” she said.

She said the event was not about “bashing” the police, but instead about increasing dialogue between police and the community.

Attendees also received information about protecting themselves against attacks, the NAACP’s guide to interacting with law enforcement and a list of city services and contact information.

Captain Melonie Thompson and Officer Joseph Martinez from the Salisbury Police Department were there to answer questions from the attendees in an open forum format.

Thompson said as a member of a sorority herself, she was honored that the sorority asked the police department to participate.

“It takes everybody to get everyone together,” she said.

She said community policing was an important initiative for Salisbury Police Chief Jerry Stokes. The department will soon be knocking on doors to introduce themselves to the specific communities as the officer overseeing that neighborhood.

Thompson said officers should get to know their assigned neighborhoods and care about the residents as if they were family.

“While you’re at work, this is your home,” she said.

One attendee asked what to do if an individual is stopped by an officer while in a vehicle.

Martinez said the best thing to do is to keep your hands on the steering wheel.

“The last thing I want to see when walking up to the car is them doing this number,” he said while reaching down to his side.

Thompson added reaching down in front of you is not a good idea either. She said to make things easier during traffic stops, try and set out wallets on the passenger seat so there is no need to rummage through a purse or reach into a back pocket.

Another attendee asked what to do if a person feels that they have been mistreated by an officer.

“The quality is extremely good,” Martinez said, adding later that the videos are automatically downloaded into computer servers when officers return to the station so they can’t be manipulated.

Thompson said the individual can call the police department if they felt like they were mistreated and can also ask for a supervisor to come out to a scene during the incident.

Thompson and Martinez also talked about programs the police department has for people interested in pursuing a career in law enforcement, including a cadet program.

Martinez said he was able to work for the department and have them pay for his basic training. Since his time in the department, he said he has encountered many Hispanic people who felt like they could turn to him if they needed help.

Thompson said the department tries to accommodate minorities for just that reason.

“We need our police force to represent our community,” she said.

At the end of the event, Thompson and Martinez gave the crowd some safety tips.

Thompson advised the crowd to hide book bags, purses and electronic devices when they are left in cars. She also said even though you may take down a GPS from the windshield, don’t forget to wipe away the circle that the suction cup mount may leave behind.

Martinez advised the women in the crowd to watch were they leave purses while pumping gas because thieves can easily swipe them while one’s back is turned pumping gas.

One of the last questions an audience member asked was what the community can do to continue building a positive relationship with the police.

“Come be in that car with us and see what we see,” she said.

Martinez said his ride along experience was eye opening.

“It completely changed my opinion of the police,” he said.

Latavia Gray, assistant manager of Lakewood Apartments, said she wished more people were able to attend the event, but she is more than willing to share all of the information she has learned.

She said she thought community policing was a great idea for Salisbury and that there should be more events to build positive relationships between the community and police.

“I think we should do it more often,” she said.