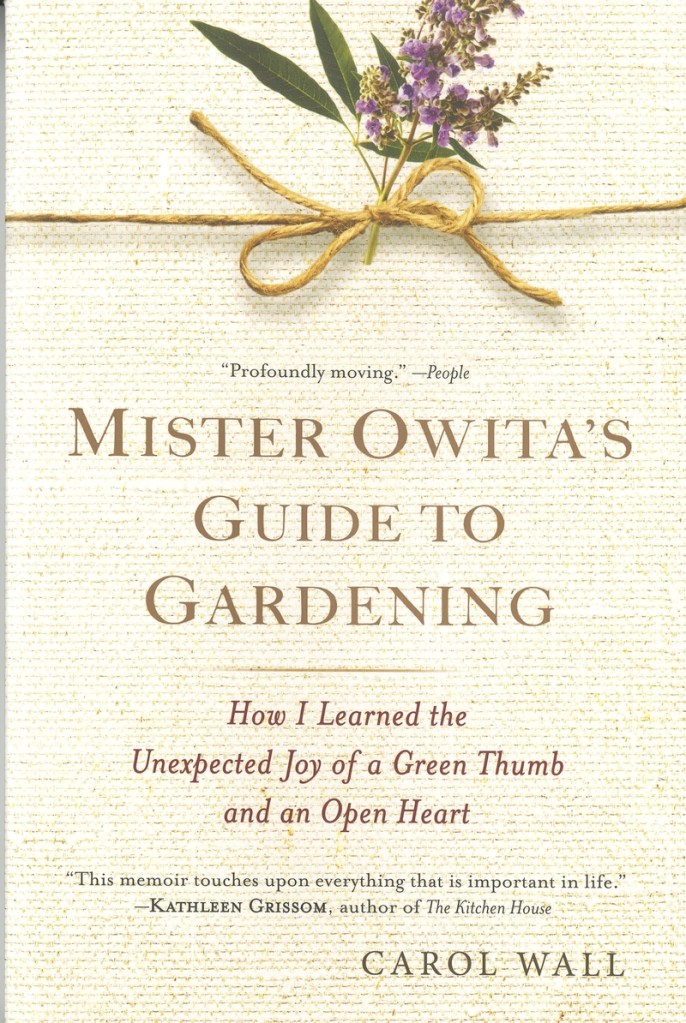 Dick Wall, husband of the late Carol Wall, will be at South Main Book Co. Oct. 28 to talk about his wife and her book.

SALISBURY — Dick Wall spends his time honoring his late wife’s dream by going around the country talking about her touching book, “Mister Owita’s Guide to Gardening: How I Learned the Joy of a Green Thumb and an Open Heart.”

Dick Wall will talk about his wife and her book at South Main Book Co. on Oct. 28.

Carol Wall had a cancer diagnosis when she met Giles Owita, a Kenyan landscape designer who tackled Wall’s disaster of a yard in Roanoke, Va.

Their friendship rebuilt Wall’s faith in her religion and herself, even as Owita was suffering with his own diagnosis.

She wrote of how they found grace, even while their hearts were breaking, how the garden became a symbol of life in more ways that one.

Carol’s book was published in March 2014, making the top 10 list of USA Today for 2014. Carol got her third diagnosis of cancer in 2013, and died in December 2014, just months after the book’s publication.

Dick Wall was in Salisbury last spring for the Rowan Reading Rendezvous, faithfully promoting his late wife’s book. He called it “her story, her dream interrupted” and their love story. When they met, he was 19 and she was 20.

Carol was living her dream, she had written her first book, she got a superstar agent and a big publisher. She earned a six-figure advance. Her book was going to be one of the top the publisher promoted.

She dealt with breast cancer for a third time in 2012, and hoped things would turn around, Dick told the group at the Rendezvous.

Carol was in the hospital when it was published.

When they met, he was a junior, she was a senior, an “All-American girl, a cheerleader.”  Dick described himself as the “village revolutionary,” with long hair and John Lennon glasses. Dick was Catholic, which in their town was considered “two steps from witchcraft.” He played basketball and had planned to become a Jesuit priest.

Dick laughed and said football players got all the dates, not the basketball players. Carol seemed to have an active dislike for him — until he got the winning shot, and all of a sudden, he was “kind of cute.” They were married less than 2 years later. They had three kids. “She was great, a great wife and mother and teacher.” She wrote and sold her Southern Journals to Southern Living and the Atlanta Journal Constitution. She wrote novels that were never published.

Then she met Giles Owita.

Dick Wall said all the houses around them were beautifully landscaped, but theirs was not. She took an instant liking to Mister Owita, who was doing a gardener’s job, although he was a landscape architect. “He transformed the yard and her life,” Dick said.

Carol told Mister Owita early, “I am going to write a book about you.”

Dick said Mister Owita was the most refined and gracious man. He told Carol to write about us, the white woman and the man from Kenya who had a Ph.D. from the University of Virginia.

Their son Phil is a filmmaker, and he was Carol’s favorite child, because they were both creative, Dick said. Phil told her, “Stop complaining and tell the story and it will wake up other stories. Combine it, make it a big story.”

The book ends in 2008, and you won’t be surprised when realizing she died several years later. The book is not about cancer or dying. It’s about living, Dick said.

“Neither Owita not Carol intended to be a student or a teacher,” Dick said. “An open ear allowed the friendship to open her life.”

He taught her what to do when the script for life doesn’t work out. He knew. He came to America to be a college professor, not a bag boy or a gardener. He was on plan B.

“This is a book of healing,” Dick said. By the end of the story, Mister Owita needed a cane, then she needed it. Through their gracious acceptance of affliction, they came to accept that life does not always work out.

“Carol didn’t want to die, but she accepted it with grace.”

When she did die, the publicist and editors told him what not to do. They said his Southern accent would make him sound dumb.

But then Carol’s agent suggested Dick put his talk in the context of healing vs. curing. Curing is easy, Dick realized. Recovering is hard. “With metastatic cancer, doctors stop saying ‘cure.’ ”

There are lots of ways to be cured other than medicine.

Curing was not possible for Carol, but she was still lucky. She had a spiritual concept, Dick said. People who die leave us with messages about healing. Life is different, there’s no getting over that, but “every day brings something good.”

Carol said the garden in winter holds 1000 lovely secrets — it’s not about dying, but about living.