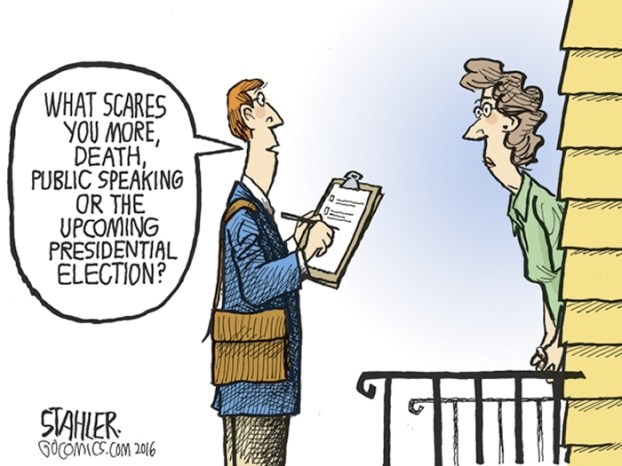 Editorial: Have faith in U.S. system

Armageddon is not coming on Nov. 8, no matter who wins the presidential election.

This year’s unprecedented race for the White House has raised emotions to perilous heights. Donald Trump has publicly called Hillary Clinton everything from a liar to the devil, and Clinton has painted Trump as a misogynistic racist.

While veteran observers may be able take the rough and tumble of harsh politics in stride, the rhetoric has pushed others to the point of stress, depression, tears and even violence. An almost tribal mentality has taken over political discourse; people outside the tribe are automatically held in suspicion and even hated. The firebombing of the Orange County Republican Party Headquarters is an all-too-vivid illustration.

Scare tactics are hardly rare in American politics. The ultimate example to date is Lyndon Johnson’s anti-Goldwater commercial in 1964, in which a little girl picking flowers is replaced by the mushroom cloud of a nuclear bomb. Talk about Armageddon. Making people fearful about the future drives them to the polls. If you believed the dark predictions of the Trump and Clinton camps, though, front-page headlines on Nov. 9 will say, “God help us all” — however the vote comes out.

It’s important to remember the U.S. government’s system of checks and balances. This is a nation of laws. While the president sets the tone for the nation, most of the promises presidential candidates make have to garner the support of Congress to be realized, even Supreme Court nominees.

Trump has disproved many principles of traditional politics, and in some corners it’s feared that all rules would be out the window in a Trump presidency, even checks and balances. Populism taken to the extreme could unleash unpredictable forces. But people on the right suggest equally out-of-control consequences of a Clinton victory.

Oddly, there’s an element of entertainment in all this. The presidential campaign has completely absorbed the American public. Like the proverbial train wreck, the spectacle is hard to turn away from. You wonder what on earth could happen next.

Meanwhile, this year’s ballot is filled with races for other important offices voters (and the media) are virtually ignoring. Today’s Salisbury Post includes a Voter’s Guide in section F that has information on nearly all those races, along with a sample ballot on page 15F. If you can, please tear your eyes away from the wreckage of the presidential campaign and read about the dozens of people offering themselves up to serve our county, state and nation. Regardless of what happens at the top of the ticket, we have a nation to run. Informed voters are the only force that can keep it going strong.

Election allegations versus armageddon  What sells more papers and boosts TV ratings? Degradation of women seems to be on top. ... read more