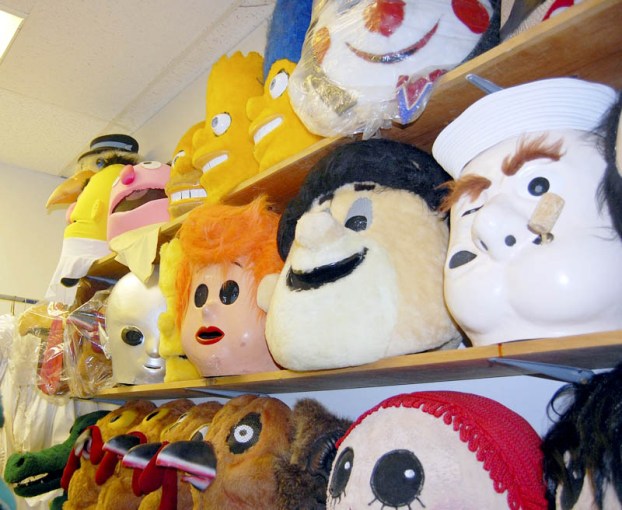 Amanda Raymond/Salisbury Post All mascot and character costumes are available to rent for Halloween at Eastern Costume Company at 112 B S. Main St.

SALISBURY — A business known for creating costumes for productions and organizations all over the area also offers those same costumes as Halloween costume rentals.

Eastern Costume Company, at 112 B S. Main St., has more than 40,000 costumes available for rent this Halloween season, from theater favorites to mascots.

Piedmont Players bought the Greensboro company in 2014 and moved it to Salisbury. The company has been in business for 35 years.

About 90 percent of the costumes are made from scratch and shipped out to local theaters, as well as places in Winston-Salem, Charlotte and Georgia.

Even more costumes were added to the stock from the Meroney Theater last Christmas.

Ashley Ward, manager, said it took some time, but all of the costumes were eventually organized based on things like the specific theater production or time period.

There are costumes from productions such as Grease and The Wizard of Oz, as well as vintage 1920s flapper dresses and suits, vintage baseball uniforms and military coats. There are also costumes to transform the wearer into Jack the Ripper, Raggedy Ann or Andy, a super hero or a princess.

Ward said she is even able to piece different items together to create original costumes.

Ward said every part of the costume is included in the price and she likes to make the costumes as accurate as possible, including proper undergarments for historical outfits.

“When they pick it up, all they have to do is put it on,” she said.

The only costumes the company is not renting are clowns because of the recent incidents and sightings of people in creepy clown costumes.

Alterations are also included in the price, and the company cleans the costumes at no charge.

“And because we make them, they don’t look like store-bought costumes,” Ward said.

Ward said renting a costume might appeal to some people because they will not have to store the costume after Halloween, and at Eastern Costume Company they do not have to worry about getting the costume cleaned afterwards.

The prices are based on 24-hour rental periods and depend on how detailed and elaborate the costume is.

Since Oct. 10, Eastern Costume Company has been offering extended hours for people to find costumes and get them altered. The extended hours will continue until Nov. 1 for returns.

The company is open from 10 a.m. to 7 p.m. Monday through Friday. Saturday hours have been added from 9 a.m. to 1 p.m. A credit card deposit is required for rentals.

Customers can even rent costumes on Halloween day.

“You could literally walk in and walk out with a costume,” she said.

Alterations will not be available on Halloween day and the selection may be limited by then, so Ward encourages customers to come early.

By Susan Shinn For the Salisbury Post For the second consecutive year, the J.F. Hurley Family Y and Life Church... read more