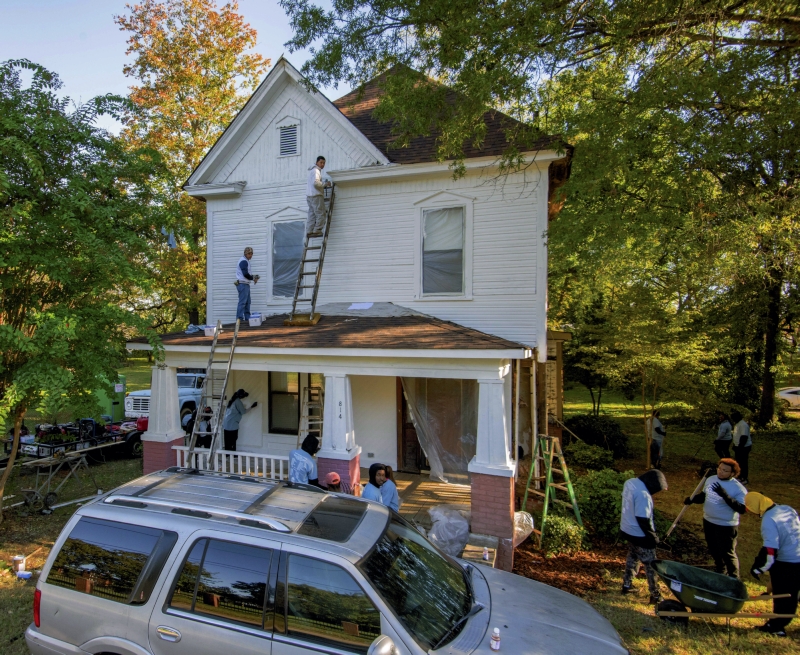 JON C. LAKEY / SALISBURY POST The house at 814 West Monroe Street was receiving some paint and caulking and landscaping on Saturday morning. A large contingent of volunteers spent the better part of their Saturday joining together to improve 5 houses along the 800 block of Monroe Street. Saturday, October 22, 2016, in Salisbury, N.C.

SALISBURY — Deborah Johnson has been living on West Monroe Street for 26 years. When she first moved into the house, all of the other houses on the block were occupied and Johnson described the neighborhood as vibrant.

Now, her family is left among vacant houses on the 800-900 blocks of West Monroe Street.

This year, the Community Appearance Commission partnered with the Housing Advocacy Commission, the Historic Salisbury Foundation and Livingstone College to bring the sixth annual BlockWork project to the 800-900 blocks of West Monroe Street on Saturday.

BlockWork is the city’s way to participate in National Make a Difference Day, an annual single-day of service.

Each year one or two blocks of a neighborhood are chosen for an improvement project, which includes cleaning up yards, landscaping, porch rail repair and other beautifying efforts.

Lynn Raker, project coordinator, said this year’s project was a little different. Livingstone College owns the nine properties on the two-block stretch and is partnering with the Historic Salisbury Foundation to rehabilitate the vacant houses.

There are seven structures, including an apartment building and the house of Dr. Joseph C. Price, founder and first president of Livingstone, and two empty lots within the nine properties.

The Community Appearance Commission decided to give the Historic Salisbury Foundation and Livingstone some help and bring the BlockWork project to the area.

Before the work on Saturday, Medina Construction replaced all of the roofs on the houses, and the commission was able to pay them with money that came mostly from private donations.

Medina Construction also did all of the preparation work for the front facades of the houses and were on hand on Saturday to work on the second floors of the houses while volunteers worked on the first floors.

Those volunteers included students from Livingstone, Pfeiffer University and Rowan County Early College, as well as individuals from the Civitan and Junior Civitan clubs, Historic Salisbury Foundation and city employees and officials.

Each property had two site managers to oversee the work and teach volunteers exactly what to do.

“Each year we try to build on previous years,” Raker said.

Raker said the day of community service has been meaningful, especially to student volunteers.

She said students from Pfeiffer said they did not realize how much the project could mean to a neighborhood.

“For the college students, it’s just a great start,” she said.

Jacqueline Baines, Miss Livingstone for this school year, was painting the exterior of a house during the project.

Baines said as part of the Sigma Gamma Rho sorority, it was important for her to serve the community by participating in projects like BlockWork.

“I really do believe in community service,” she said.

“It’s about time we start doing something with these houses over here,” he said.

Raven Perez, a junior at Livingstone, said it is a good thing whenever historically black colleges can give back to the community.

“It’s just a good opportunity to fix up the community of Salisbury,” she said.

“It’s a great opportunity for community service for our students and to ensure we’re brightening up the community, as well as Livingstone,” he said.

Lewis also said the students were able to learn some practical, hands-on skills from the experienced contractors on site.

Deborah Johnson said she enjoyed seeing different groups of people come together to improve the neighborhood.

At her house, the volunteers rebuilt the railings on both floors, replaced windows and the front screen door, repainted the porch and put on a new storm door.

She said the BlockWork project was great for homeowners who may not be able to do repairs themselves.

Johnson thanked all of the volunteers and other workers, as well as the organizations that chose her block to be revitalized.

“I hope this block will become a vibrant neighborhood again,” she said.