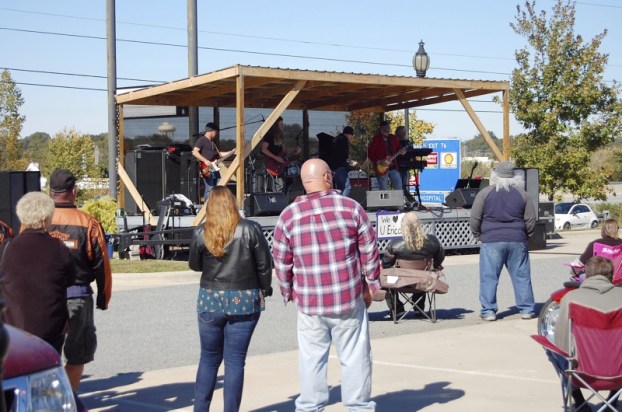 SALISBURY — “If this is what it took to wake the world up to the fact that child abuse is real, then she didn’t go in vain,” Carolyn Parsons said on Saturday afternoon.

She and others in the community attended a benefit concert at Tilley Harley-Davidson to honor her biological daughter Erica Parsons and raise money for Prevent Child Abuse Rowan.

Joe Davis, of the Joe Davis Band from Kannapolis, contacted Parsons about putting something together to raise awareness of child abuse, and they eventually came up with the concert.

Davis said he has been friends with Parsons since childhood. He said what happened to Erica Parsons was terrible and sad.

“That kind of stuff shouldn’t be allowed to happen,” he said.

After a three-year investigation by the Rowan County Sheriff’s Office, investigators found the body of Erica Parsons in a shallow grave in rural Chesterfield County, S.C.

She was reported missing in 2013 by her adoptive brother, Jamie Parsons, who reported that he had not seen Erica since 2011.

Carolyn Parsons said the event was a way to bring awareness to child abuse, neglect and endangerment.

“As well as honoring Erica, it brings child abuse back to where it needs to be…” she said. “Just because you don’t see it, doesn’t mean it’s not happening.”

Davis said as well as his band, Preacher Stone and Gary Ramsey also performed during the event.

As well as donating the proceeds to Prevent Child Abuse Rowan, Parsons hoped that some of the funds could go towards installing two plaques at the schools Erica attended — Shadybrook Elementary in Kannapolis and Bostian Elementary in China Grove.

Davis said Tilley Harley-Davidson was more than happy to host the event on the property.

“Everybody was genuinely concerned,” he said of Harley-Davidson and the participating performers.

Davis said he is planning for the concert to be an annual event.

Pam Bradley heard about the concert from a friend and decided to attend. She said the cause was a great one and there should be even more support.

“I think everybody else should do more of this,” she said.

Ann Arbelaez, assistant coordinator for Toys for Tots, said the news of Erica’s body being found hit her especially hard because of the work she does for children.

“It just broke my heart when they found her, but at least now they can put her to rest,” she said.

She said she hoped a good amount of money was raised for Prevent Child Abuse Rowan.

“I hope they do really good today for the cause,” she said.