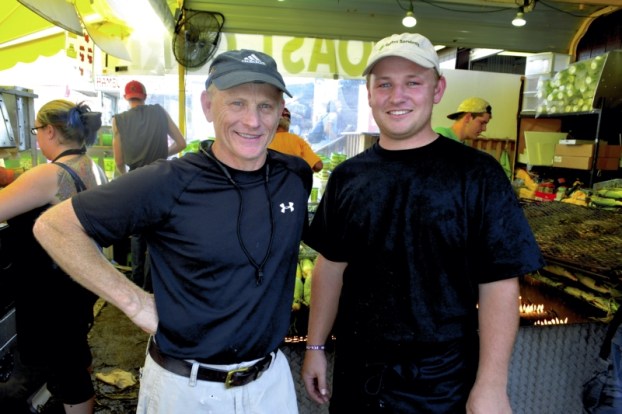 Jeff and Troy Beaver of Salisbury stand at their family’s roasted corn stand, which Jeff has been bringing to the State Fair since 1988. Photo by Susan Shinn, for the Salisbury Post.

10 things that are great about the state fair

From the Home Office in Salisbury, N.C., here’s the top 10 list from the 2016 North Carolina State Fair, which concludes today in Raleigh.

Was among the first in line for the delectable treats from the N.C. State Food Science Club. The tent opened at 11 a.m., so it was ice cream for lunch. This year’s winning flavor was Caramel Apple Crisp. It was a bit sweet for my taste, but there was none left in my cup, either.

Was thrilled to run into Jeff Beaver of Salisbury and his son, Troy, a recent Elon College grad. Jeff has been bringing roasted corn and lemonade to the fair since 1988.

He sold thousands of ears of corn during the fair’s 10-day run. Roasted over an open fire, each ear takes about 20 minutes until it’s handed, piping hot, to a salivating customer.

“We cook a lot of corn, and keep it fresh, and try to have a good product,” he said. “I’ve had three real jobs — but not for long.”

Jeff travels from March to May and August to October. The rest of the time he hunts and does relief work.

Rode the train from Downtown Salisbury right to the fairgrounds. Pleasant, clean and comfortable. (Not so great: the return train was an hour late coming home. But worth it not to sit in traffic on the interstate.)

On the way home, I ran into Lori Hough and her mom, Evelyn Cole. Lori and Evelyn came with the seniors group from Franklin Heights Baptist in Kannapolis. Lori retired in June from teaching and had never been to the fair before.

For 10 days, the fair is the world’s epicenter of all things fried. Sydney, my Weight Watchers leader, was proud of me for staying away from these foods. Um, I didn’t mention the free samples of hushpuppies … I think “free” means you don’t have to write it down.

Chickens, cows, rabbits, horses. My favorite: a beautiful black Percheron Henry Hampton brought from Mount Ulla. Ruby, 11, weighs 2,300 pounds, and was intent on keeping watch over a man napping next to her stall — he wasn’t getting a lot of sleep.

One wedding-themed entry had the words “Hope,” “Love” and “Loo.” I couldn’t figure out “Loo,” until I stood farther back and realized it said, “I do.”

• The Village of Yesteryear!

A building full of beautiful handcrafted items by artisans from throughout North Carolina. I was enchanted by the tatting display, because my grandmother and great aunt both tatted. I hope I can learn someday.

Was in heaven walking by the refrigerated cases, looking at all the mile-high, blue-ribbon pound cakes. (I probably should tell Sydney about this, because surely I must have absorbed some calories.)

Raleigh native Meredith Brincefield grew up going to the fair. This year, she and husband Josh took their three children, Bo, 9, James, 6, and Vivian, 3, to the fair for the first time. They rode the rides, played games, ate all of the fair favorites, visited the Village of Yesteryear. The kids milked a cow named Raisin.

“We had the best time and loved every minute of it!” Meredith said.