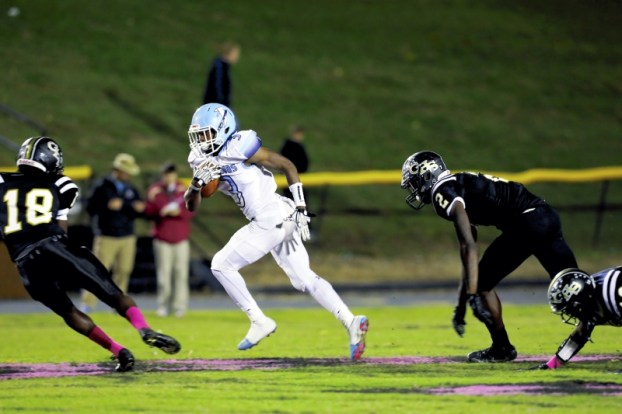 CONCORD — West Rowan had a perfect opportunity to widen the gap between itself and the rest of the South Piedmont Conference Friday night.

But instead of rising to occasion, the Falcons bogeyed the final hole, squandered a nine-point third quarter lead and dropped a 41-32 decision at Concord.

“Our guys battled, made plays and gave us a chance to win the game,” coach Joe Nixon said after West (7-2, 6-1) dropped into a three-way tie for the conference lead. “We came up on the short end.”

West had its six-game winning streak snapped when defending league champion Concord (7-2, 6-1) scored 24 unanswered points in the second half to erase a 26-17 deficit. The Falcons closed the scoring when quarterback Payne Stolsworth threaded a 23-yard touchdown pass to Kortez Weeks with 1:45 to play.

“We made some mistakes here and there,” Weeks said after catching seven passes for 106 yards and scoring his 11th and 12th touchdowns of the season. “We’ve got some stuff to fix, but I thought we played well.”

West looked like it was going to huff and puff and blow Concord’s house down when senior running back Jovon Quarles took a handoff and raced 53 yards for a touchdown on the game’s second play from scrimmage.

“It was a great start,” Quarles (19 carries/128 yards) said after logging his seventh consecutive 100-yard game. “I found a hole between the right tackle (Logan Younce) and right guard (Caleb Link). Then the safety ran right up to me. I beat him and it was nothing but green grass.”

Forty seconds later, the score was tied. Concord quarterback Jacob Irby completed only 10 passes but amassed 274 yards in the air — including 69 on a throw to South Carolina-bound receiver Hamsah Nasirildeen with 10:56 remaining in the first quarter. Before the period was over the two hooked up again on a 57-yard flea-flicker TD pass that included a lateral from running back P.J. Hall.

The Falcons drew within 17-13, at halftime, on Stolsworth’s 13-yard scoring pass to wideout Armoni Hogue, late in the second quarter. Then in the third period, they reclaimed the lead on a 32-yard TD pass to Weeks, off a well-executed play-action and slid into the driver’s seat when senior defender Deyquan Byrd intercepted an Irby pass and returned it 52 yards for a touchdown. Irby was picked off four times, twice by Byrd.

“We just played how we know how to play,” said L.J. Robinson, the West linebacker who was a sideline-to-sideline terror. “It was a little bit of a struggle trying to turn opportunities into points, which is what we were hoping. It didn’t go that way tonight.”

It began to tilt Concord’s way late in the third quarter. Irby hit tight end Isaac Staton with 24-yard completion to the West 26-yard line and two snaps later Hall (26 carries/98 yards/3 TD’s) dragged a couple of West defenders into the end zone on a 17-yard touchdown run. The 210-pound senior added two fourth-quarter scores, the last on a seven-yard burst out of a Wildcat formation that put the Spiders ahead 41-26 with less than five minutes remaining.

“They turned it up in the fourth quarter,” said Robinson. “We got the lead and they didn’t back down. We tried to bend and not break, but they got the best of us. Give them their props.”

Perhaps the most disappointing aspect was West’s inability to throw a knockout punch when it had the chance.

“It’s upsetting,” said Quarles, who sat out the last eight-and-a-half minutes with a mild ankle sprain. “At times we believed we had the game won, only to let it go. We didn’t make enough big plays on offense and it slipped away from us.”

NOTES: West’s defense forced four turnovers but yielded 429 total yards. … The Falcons visit Cox Mill next Friday and host Hickory Ridge on Nov. 4. Victories in both those games put them in contention for their first conference title since 2011.

Prep Football: Cavaliers win a big one over East Davidson