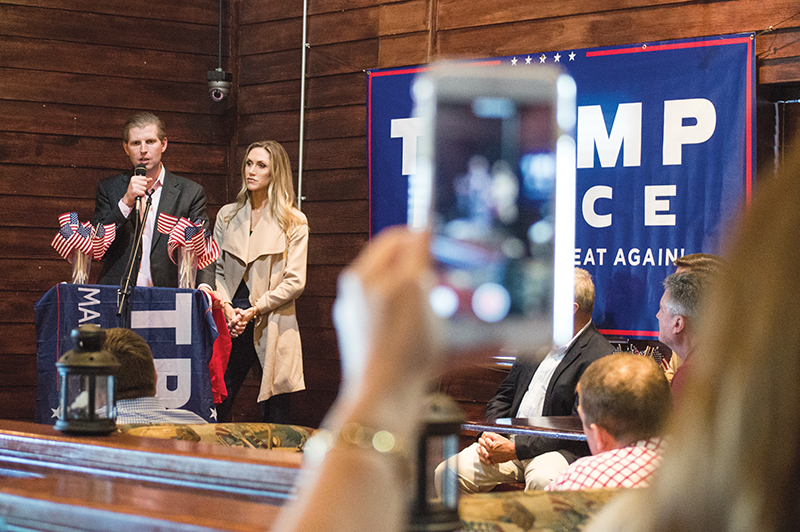 Josh Bergeron / Salisbury Post - A woman videos a speech by Eric Trump, the second-oldest son of Republican presidential nominee Donald Trump, and his wife Lara Trump during an event at Thelmas Down Home Cooking in Salisbury. More than 100 people attended the event.

Americans want a successful and strong country, jobs that pay well, a strong military, senior citizens who are taken care of, a fixed education system and an end to corruption, Eric Trump said in a Friday speech in Salisbury.

“My father is going to end this nonsense and he’s going to make America great again,” Eric Trump said. “I’m so proud of him and I’m so proud to be in this fight with him. Make no mistake about it, guys. We are absolutely going to win this thing.”

As the 2016 presidential race enters its final stages and early voting begins, Eric Trump and wife Lara spoke to more than 200 rowdy Republicans at Thelma’s Down Home Country Cooking in West End Plaza. Speeches by the couple focused on ways the American economy and other areas of society have declined.

“What we have going on in this country right now is an absolute tragedy,” Lara Trump said. “Look around our home state. Manufacturing has left.”

She listed government regulations, taxes and the Affordable Care Act as items that have negatively affected small business.

The husband and wife pair said Donald Trump has solutions that will solve America’s problems.

“He has common-sense, real solutions for these problems and he is going to fix it,” she said. “I can tell you that for sure.”

Throughout the speeches, Eric and Lara Trump attracted loud, sometimes rowdy, applause. At times during the event, Salisbury resident Ronnie Smith ran up and down the aisles cheering and waving a Donald Trump sign.

Hudson framed himself as a conservative congressman who’s worked across the aisle to “get things done.” America also needs a president who knows what’s most important, he said. Donald Trump is the “only hope for this country,” he said.

The sentiments expressed by speakers on Friday were identical to the ones mentioned by attendees, some of whom said they have voted for Republican and Democratic candidates in the past.

The most common refrain among attendees was that Donald Trump is candid and is not a politician.

“He speaks his mind and he just puts it out there like it really is,” said Salisbury resident Carolyn Hall. “He’s for the people and he’s for us.”

“She a liar, plain and simple,” said Dianne Hall. “For me, Trump isn’t a politician and I think he knows how to handle money. He can help our country get out of debt.”

J.R. Rufty said she has voted for presidential candidates of both major political parties. Among other things, Rufty said she also likes Donald Trump because of his successful business past.

“He knows how to put the right people in the right positions and I believe that he will help our country bring back jobs, make our economy strong again, and I believe he will also do something about ISIS,” Rufty said.

In recent weeks, Donald Trump has been the subject of controversy because of sexually explicit comments and alleged sexual assaults, including a video of his off-camera comments during the taping of a 2005 show. During the second of three presidential debates, Trump said he never committed any of the acts described in the video.

Rufty said she’s not worried about Trump’s remarks. A human resources professional, Rufty said past performance is a better indicator. Rufty and her husband, Ken Rufty, spoke extensively about how the “mainstream media” has influenced the election. If Trump loses the presidential race, it’s at least partially because of media coverage, the pair said.

“I’m not exactly protesting his conservative ideology, but it’s more about his speech and like his rhetoric that he uses to describe Hispanics and Latinos and just people of color in general,” Annie Cardelle said. “In his speeches, he brings up people killed by immigrants, which there’s no basis that immigrants kill people more than everyday citizens. So, he’s contemplating that immigrants, and specifically Mexican and Hispanic immigrants, are criminals and murdering people.”

As a crowd of people formed a line for pictures with Eric and Lara Trump, the Cardelle sisters joined in and eventually got their chance to pose with the couple.

Annie Cardelle had a sweater tied around her waist. As they all smiled for the cameras, she pulled the sweater down to reveal her shirt’s message: “Latina contra Trump.”

If the Trumps noticed, they didn’t let on.