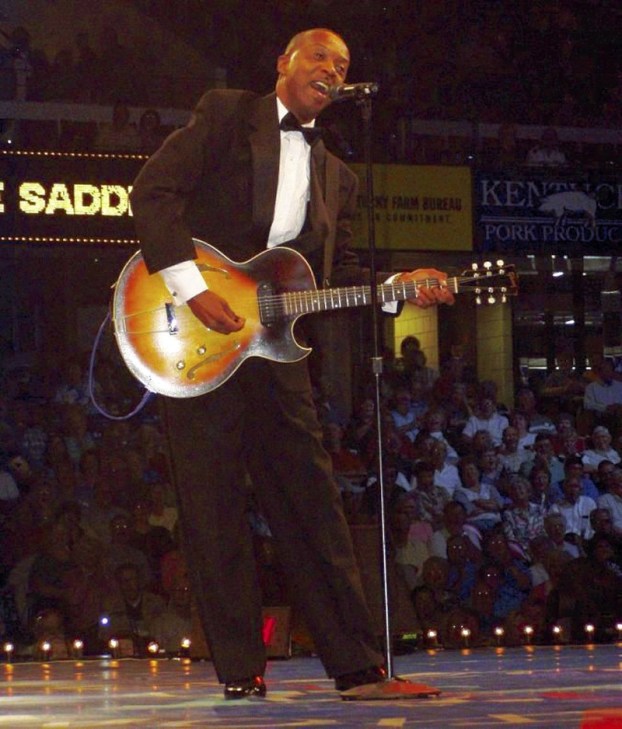 Special to the Post by Rev. John C. Elam

Spring, 1975. Chapel Hill is beautiful, as always. Seventy-five degrees, Carolina blue sky, dogwoods in full bloom, Friday afternoon… Walking back to the Beta House to play basketball with the guys.

Back at the house. Sides picked, juke box pulled up to open doors… right to the edge of court. Game starts.

Somebody punches J-13 on the box. It’s been punched before; maybe 313 times.

Hey, My Baby’s Coming Home to Stay, by the Reggie Saddler Revue. A Carolina classic, and a mainstay at Beta House during Friday pickup games.

I pop one in from the corner. Nothing but net.

Best friends. Hoops. Reggie on the box. Carolina blue sky. The thought occurs to me, “Maybe this is what heaven is like.”

That spring passes quickly. Reggie and the Revue pass through Chapel Hill four times that semester. They play at Beta house parties at least twice.

Reggie Saddler is THE incredible talent at universities from Atlanta to D.C. His reputation continues to grow. His records sell.

But the best part of all… the conversations with Reggie and Freddy, his bass player, during breaks.

A sometime piano player myself, we discuss chordal progressions, guitar runs, bass lines and vocal harmonies non-stop. Breaks are extended and dates are ignored as the discussions deepen.

Time passes. I move on, through law school and into a 33-year career as a partner in a Greensboro law firm.

Reggie Saddler’s career blossoms. In time, he has formed a top-tier seven-piece band and is performing with the Four Seasons, Jerry Lee Lewis, the Drifters and the Platters. He opens for Don Rickles, Redd Foxx and Bill Cosby at the Las Vegas Hilton.

Lake Tahoe beckons… Reggie and his band join Fats Domino, Chubby Checker and Ricky Nelson for Dick Clark’s Rock-N-Roll Revival. Just as at Carolina, crowds love them, and they are huge. At the height of his success the Reggie Saddler Band performs before 75,000 in Tokyo, Japan.

But something is missing; both for Reggie and me. Success in the courtroom and fame on the stage does not provide the lasting fulfillment we are seeking on opposite sides of the continent.

God calls. For Reggie, it happens when the Holy Spirit moves him to visit Mt. Zion Missionary Baptist Church in Los Angeles where he hears Pastor E.V. Hill preach; that same pastor who preached the popular sermons on “How to Get Out of This Mess You Are In.”

Reggie is moved by the Word, and gives his life to Jesus, that very moment.

From that day forward, he travels the world with his wife, Bridgette and daughter Ingar, singing and preaching to tens of thousands; bringing a multitude to Christ. Tours follow… with David Jeremiah, Charles Stanley and the Bill Gaither family.

The Saddler Family spreads the word far and wide. Gospel records such as, The Real Thing and We’ve Got to Tell the Truth hit the Top Ten on the Singing News top forty. I’ve Got Me a Home charts well and becomes their signature song. Audiences love their talent and charisma.

Quite far away, God is working in a different way. The joy derived in arguing cases before judge and jury has left. No longer do I look forward to the walk to court. More often than not, I am late, having stopped to pray with someone begging on a corner.

I return to Seminary, going nearly every weekend for seven years, while trying cases and practicing law during the week.

Ordination follows, and installation at Franklin Presbyterian Church in Salisbury. The courtroom is now in the rearview mirror.

November, 2014. I’ve been at the piano, trying to figure out the chordal progression of that old favorite from college days, Hey, My Baby’s Coming Home to Stay. I begin to wonder how Reggie’s doing.

Curious, I search the Reggie Saddler Revue on the internet, thinking his band must still be performing in the States.

I discover his conversion to Christianity, and his success with the Saddler Family Gospel Singers. Immediately, I send a lengthy email, recalling those wonderful times at Carolina, congratulating him on his new mission, and informing him of my ordination.

Within days, the phone rings. I answer, and a mellow baritone voice booms, “Hey-ey my baby’s coming home to stay!”

We laugh so hard we can’t talk for a good minute. Then we catch up. Reggie’s as sharp as ever, and he recalls nearly every conversation we shared. Before two months pass, we’ve gotten together, reminiscing, playing and singing the old songs and praying for the church.

We are brothers in Christ, and brothers in time. We agree to a bigger reunion, with the Franklin Church community, the Salisbury community and the Saddler Family Gospel Singers.

That reunion takes place at the Franklin Presbyterian Church on Sunday, Oct. 23 at 5 p.m. Reggie and the family will be fresh off of a tour through Branson, Missouri and ready to share the gospel in song.

This time, it’s not the Beta House, it is God’s house; and the music is incredible.

It’s a reunion long in the making. After forty-plus years, Reggie’s back. Put on your dancing shoes.

The Reggie Saddler Family will be performing original gospel favorites along with their own gospel songs at 5 p.m., Sunday, Oct. 23 at Franklin Presbyterian Church, 280 Franklin Church Road, Salisbury, N.C. A reception with the family, along with a meal, will take place immediately following. Admission is free; a love offering will be taken.