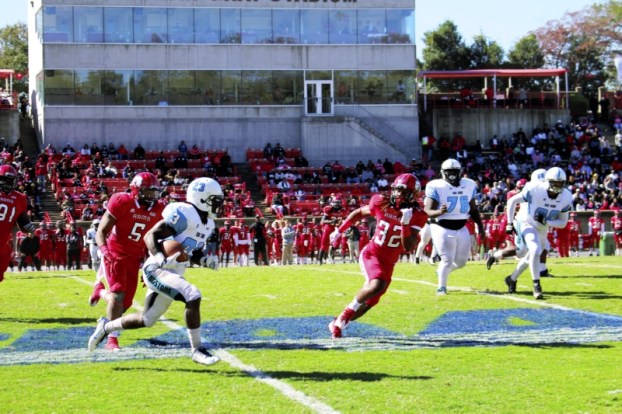 WINSTON-SALEM — This may go down as a forgettable season for Livingstone’s football team, but Saturday’s loss at Winston-Salem State provided some memorable moments.

Throw out that hide-the-women-and-children first quarter and the Blue Bears held their own in a 40-21 CIAA setback to the defending league champion.

“If you take the first quarter away, we played them straight up,” coach Daryl Williams said at Bowman Gray Stadium, where Livingstone (2-6, 1-4) yielded 30 points before the game was nine-minutes old. “That slow start got us again. It’s been our nemesis the whole year. Slow starts and turnovers.”

Both played key factors as Livingstone fell for the fifth time in its last six games. Right from the start, the Blue Bears seemed to be in over their helmets. Facing a gusting wind, their first play from scrimmage — a screen pass to running back Jarius Richardson — turned into a loose-ball adventure and a 14-yard loss.

“Working against the wind,” teammate Everett Ransom said. “We all had to adjust to the ball.”

Two snaps later Livingstone quarterback Xavier Longerbeam was sacked in the end zone for a safety and the rout was on. WSSU (6-2, 5-0) turned the opening period into an all-you-can-eat buffet by scoring four touchdowns in just over seven minutes and mounting a 30-0 advantage.

“We came out and played slow,” said Livingstone sophomore Gerard Lyons, a 300-pound defensive tackle. “Not fast and aggressive like we were supposed to. That hurt us. As a man, you can let somebody run over you like that.”

Longerbeam, a red-shirt freshman, started his fifth straight game but finished it on the sideline. He passed for 155 yards and his seventh touchdown, but was sacked eight times and often looked rattled. Left-hander Thaddeus Bell relieved in the fourth quarter and completed five passes for 46 yards and a late touchdown to Ransom.

“(Longerbeam) is an 18-year old,” Williams said. “And we’re going to live or die with him the rest of the way. But he should have thrown the ball away a few times.”

Williams said the wind, which gusted to 25 miles-per-hour, presented problems for the LC offense. “The wind was really, really bad,” he said. “But it’s part of the game. You’ve got to play it both ways.”

Winston-Salem quarterback Rod Tinsley, a seasoned sophomore who transferred from Gardner-Webb, had no such problem.

“Wind or no wind, we believe in executing plays,” he said. “We were able to keep it simple by running plays we knew would work.”

Livingstone got on the scoreboard late in the first quarter when Richardson took a handoff and powered into the end zone on 4-yard run. It capped a 70-yard drive that signaled a too-late-to-matter end of the Rams’ dominance.

“Take the first quarter away and its 14-10 Livingstone,” said Ransom, who caught six passes for 58 yards and a TD on his 2oth birthday. “It shows we didn’t give up. It shows we have what it takes to win. We just have to work together and finish.”

The Blue Bears drew within 30-14 with 2:05 remaining in the third quarter when Longerbeam rolled out to his left and flipped a 6-yard touchdown pass to running back Latrell Flowers. Then with 4:50 to play and Bell at quarterback, Ramson made his second TD grab of the season on a 5-yard pass in the right corner, making it a 37-21 ballgame.

“Winston likes to mock the snap count,” Ransom said. “So on that play (Bell) caught them off guard with a quick snap and the defensive back wasn’t ready. I made a quick move and prayed the ball was in a good spot. That one was for my birthday.”

Unfortunately, the damage had been done.

“We finally settled down and figured out we could play with them,” Williams said. “We’ve got a good football team. We just make a lot of mistakes.”

NOTES: The Rams have now won 14 straight against Livingstone, dating back to the Blue Bears’ last win in the series in 1998. … Sophomore Demasio Williams led the LC defense with seven tackles and a third-quarter interception. Lyons and DeAngelo Dickinson combined for the team’s only sack. … Livingstone had 21 first downs despite managing only 61 yards rushing. … The Blue Bears visit Fayetteville State next Saturday and conclude their season at J.C. Smith on Nov. 5.