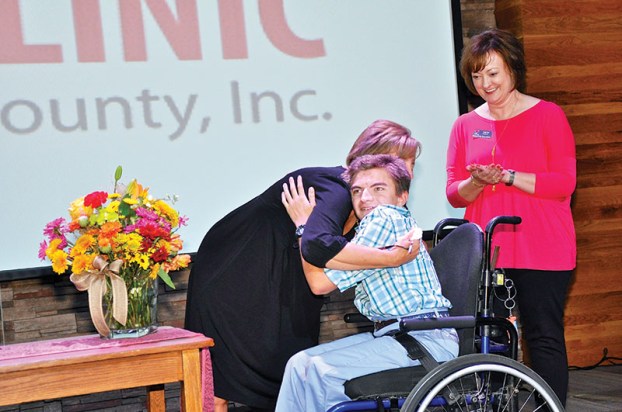 Nicholas Black hugs Angela Graham, his neighbor and fellow volunteer, after she was named Volunteer of the Year for Community Care Clinic at its annual Community Thanks event. Looking on is Cathy Teat, the clinic’s pharmacist. Photo by Nancy Shirley.

Over the past 20 years, the Community Care Clinic has seen 11,500 patients. On Monday evening in the Faith Center of St. John’s Lutheran Church, the clinic’s staff, board members, volunteers and supporters learned about two of them.

To celebrate the clinic’s 20th anniversary, a 20-minute video chronicled not only its success, but the success of two of its clients, Wayne Turlington and Wilbert “Eddie” Hall.

The video, produced by Mark Perry Jr. and Caleb Childress, was paid for by grants from F&M and Novant. An abbreviated version will be available on the clinic’s website within the next month.

“I went through a lot,” Turlington said in the video. He often slept outside and had to search for food. “I just ran and ran.”

He spent nine years in prison, he said. “I didn’t know if I was gonna live or die.”

Meanwhile, Hall worked at Food Lion and another company for years before being laid off. He got medication through his insurance, and never realized he would have to go without it. When that happened, his health deteriorated, and a 2012 diabetic episode nearly took his life.

“I could not imagine being that low,” he said in the video.

Then in 2013, his son, Billy Cruse, was paralyzed following a motorcycle accident.

“He wasn’t adjusting,” Hall said. “That was just the saddest … That just hurt.”

Turlington decided he wanted a better life. While a guest at Rowan Helping Ministries, he saw the new shelter being built, and asked for a job. He now works full-time at RHM, and has received medical and dental services from the Community Care Clinic since 2014.

“I’m blessed to be alive,” Turlington said. “I feel different. I think positively. I can help people. If you can put it in your mind and heart that you want to change, you can. The clinic has helped me out a lot. I want to be a good father to my kids and a good husband to my life. The clinic provided the next step.”

That was also the case with Hall.

The Department of Social Services referred Hall to the clinic, he said. “I didn’t expect it to work out as well as it did. They’ve been a huge help.”

“We will change as our environment changes, to provide whatever we need to provide,” said Mike Fuller, a local pharmacist and longtime clinic volunteer.

For every $1 donated to the clinic, it provides $8 in care, Woolly said after the video. That translates to $4.7 million in care with a budget of $600,000. “Our patients truly show us how important it is for us to be here.”

Woolly introduced Turlington and Hall, both in attendance, who received a standing ovation from the audience of more than 100.

“I hope that I touched somebody’s heart,” Turlington said afterward.

Nicholas Black, a faithful volunteer, presented the Mike Fuller Volunteer of the Year Award to Angela Graham, his neighbor and fellow volunteer.

Each Tuesday, Graham sorts medications donated from Lutheran Services Carolinas. These medications, Woolly estimated, extend the pharmacy’s reach by about $30,000 a year.

“She is an encourager,” Woolly said. “She brings a warm spirit and a beautiful smile, and she encouraged Nicholas to volunteer at the clinic.”

“Our heroes are the staff members who are here every day,” Graham said. “It is a pleasure and joy to volunteer, and to see the respect, care, concern and rapport they have with patients.”

“I’m totally flattered and honored by this award,” Eason said. “We have a great staff and great volunteers. I’m proud to be on the board, and I’m proud of Rowan County for supporting this clinic. They need us, and we need you.”

Woolly also recognized about a dozen of the clinic’s original board of directors who were on hand for the evening, as well as the clinic’s staff.

Sheila Mulkey was an original board member in attendance. When she got home Monday night, she realized it has been a few years since she has contributed to the clinic.

Commissioner candidates square off in Chamber of Commerce forum

By Josh Bergeron josh.bergeron@salisburypost.com SALISBURY — When Rowan voters cast ballots in the 2016 county commissioners race, they should liken... read more