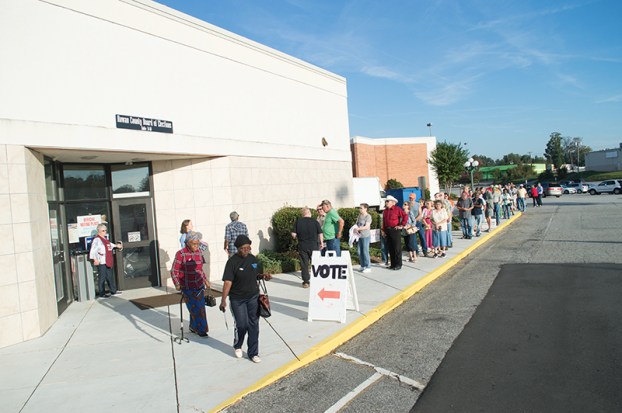 A long line of people wait to cast ballots during the first day of early voting in October 2016. More than 100 people cast ballots in the first hour. Josh Bergeron / Salisbury Post – Voters file into the polls on Thursday during the first day of early voting in Rowan County.

SALISBURY — Voters in Rowan turned out in force on Thursday for the first day of early voting.

Some were ready to “get it over with.” Others were excited to cast a ballot for their favorite candidate. Regardless of the reason, crowds of voters filed into polls on Thursday for the first day of early voting.

In fact, the crowds of voters beat the total number of first-day voters from the prior presidential election. On Thursday, 1,467 people cast ballots and 33 of those people were same-day registrants. On the first day in 2012, a total of 1,435 people voted.

A line of people formed before polls opened at 8:30 a.m. The line grew to dozens of people at various points. By late afternoon, the streaky stream of voters narrowed to a trickle.

Brad Cunningham, who voted with the first crowds of morning voters, said he wasn’t among the voters who were excited to cast a ballot.

“I think that 2008 was exciting, with (Barack) Obama and John McCain,” he said. “Then, things were exciting. You know, people were optimistic. Considering the people running, this year I feel like we need to limit the damage that’s caused.”

Cunningham voted for Democratic presidential nominee Hillary Clinton, but he wasn’t happy about it.

“I won’t say it’s a protest vote, but Trump makes me nervous,” he said. “I have zero confidence in Donald Trump.”

52-year-old Eric Stokes, however, said he was excited to vote. Stokes said he was specifically excited by Republican presidential candidate Donald Trump’s candidacy. He was so excited, in fact, that it was his first time voting in any election.

Stokes said he hadn’t voted in past elections because candidates for office “have all been the same.” He’s excited about Trump’s candidacy because Trump isn’t a “lifetime politician.”

The fact that he’s new to politics was among the reasons Nanette Pierce, also a Trump supporter, said she likes the Republican nominee. Pierce said controversial comments by Trump, including those sexual in nature, aren’t worrisome. Police officers and others have said far worse things than Trump, Pierce said in response to questions.

Pierce said she decided to cast a ballot on the first day because she wanted to “get it over with.”

“I figured the sooner the better,” she said.

In an effort to rally people to participate in early voting, Trump’s son Eric will be in Salisbury today with his wife Lara.

Eric and Lara Trump are scheduled to be at Thelma’s Down Home Cooking at 4 p.m., said Rowan County Republican Party Chairman Stephen Kidd. The pair will speak briefly about the importance of early voting, Kidd said.

The address of West End Plaza — where both Thelma’s and the Board of Elections is located — is 1935 Jake Alexander Blvd. West.

The full early voting schedule is as follows:

• More polling places will be open Oct. 27-Nov. 5 on weekdays from 8:30 a.m. to 6:30 p.m. They include Rowan Public Library Headquarters, Cleveland Town Hall, Spencer Municipal Building, Rockwell American Legion Building and Rowan Public Library South Rowan Regional branch. The Board of Elections will also be open at those times.

• On Saturday, Nov. 5 — the final chance to vote before Election Day — only the Board of Elections office will be open. Hours will be 8 a.m. to 1 p.m.

For election-related questions, contact the Rowan County Board of Elections at 704-216-8140.

By Shavonne Walker shavonne.walker@salisburypost.com SALISBURY — Like many others Michelle Gray watched the evening news and read newspaper articles about... read more