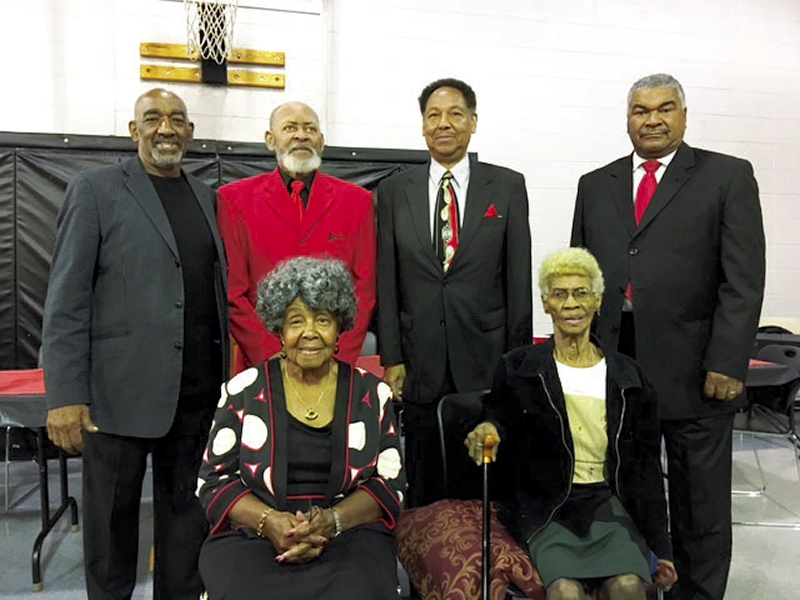 There was nothing ominous going on, but instead, it was the kind of assemblage that evoked love, laughter, fond memories, words of praise and much deserved recognition.

Emcee Carl Marlin, chairman of the planning committee, noted that the the attendance was the largest in the banquet’s history.

Childers, from the class of 1943, served as the first majorette for the 12th grade senior class because prior to 1943, the school only offered classes up to the 11th grade.

Wilkins, class of 1949, was a gifted basketball player and showed an equal amount of athletic prowess as a majorette. Because of illness, Wilkins was unable to attend the ceremony. Her niece, Carol Waller, accepted the award on her behalf.

Chalk, class of 1949, won the Best Majorette Award during her senior year.

Tabor, class of 1960,  was a triple threat in athletics. He won the MVP award for both football and basketball, had a track victory in the 440-yard dash in the Western Division Championships and brought home the Billman Trophy. Tabor attended N.C. Central University on a full athletic scholarship.

The triple threat continued three years later in the class of 1963 with Poag, who now lives in Decatur, Ga. Poag excelled in football, basketball and track and field. On the track, he anchored the 440-yard relay team, and performed as a high jumper.

Before “Dr. J,” Julius Erving, there was a real doctor in the making at Price High School. Johnson, who now lives in Raleigh, was a standout in both football and basketball. Johnson led his team in steals and assists and was third in scoring and rebounding. As a senior in 1964, Johnson scored 33 points in the regional tournament.

Miller put his stamp on a great athletic year in the class of 1966. He was a standout in football before winning the MVP award in basketball. He had a 40-point game as a senior. Miller was named the school’s Athlete of the Year.

Each honoree regaled the room with memorable stories and personal anecdotes from what they described as the “good ole times.”

Childers recalled marching in her oxford saddle shoes instead of majorette boots. Chalk thrilled the room by showing an 84-year old majorette never loses her skills. The room erupted with laughter and applause as she performed a brief high step routine using her cane as a baton.

A common theme flowed throughout each speech as the honorees recalled with fondness the teachers and coaches, but most importantly the excellent education each received. Doris Goodman, who was a 2015 Hall of Fame inductee, presented each with a plaque and certificate.

An inaugural award was introduced and presented to a special Price graduate who has made a tremendous impact and left an indelible mark on the Salisbury community.

The Founders Award is given in memory of the late Rufus Little, John Mackey and Fred M. Evans. The distinguished award was presented to Floyd “Peewee’ Kerr, III, a 1968 graduate.

Kerr worked for the City of Salisbury in the Parks & Recreation Department and was the cornerstone at Hall Gym and Miller Recreation Center. He also served as director of the former Lincoln Pool for 14 years.

Kerr created and led many youth programs that were responsible for the success of local athletes who excelled on the collegiate and professional levels. For his commitment and dedication to youth and athletics, he was the 2016 recipient of the Fred M. Evans Community Service award presented by the Rowan Salisbury Sports Hall of Fame.

Kerr was gravely ill in a hospital at the time of the banquet and died last Tuesday.

Evans took a moment to share the significance and impact Price High School had and continues to have on future generations that attended the merged Boyden and later Salisbury High School.

He shared a personal story of how during his time at SHS in the early 1980s, he and other players showed their respect by going against uniform rules and incorporating the color red into their football uniforms.

Evans encouraged the younger attendees to always remember with pride what Price High School meant and what those being honored stood for.

The program concluded with a singing of the school song, “The Red and Black,” written by the late Abna Lancaster.