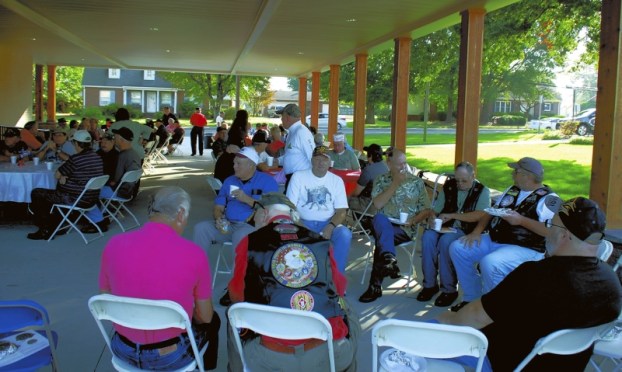 Earlier this year, the funeral home provided appreciation lunches for veterans and the law enforcement community.

Krispy Kreme provided a dipping station for the doughnuts, where veterans could coat their pastries in chocolate and sprinkles.

“I love doing this, letting them know how much we appreciate them,” said Debbie Rainey, assistant manager of the Krispy Kreme location in Salisbury. “My dad was a veteran.”

“They really need to be noticed and thanked for what they do,” Rainey said, pausing from her conversation at the dipping station with veterans Jay Proctor and Charles Rogers.

Chris Cranford served as the morning’s cook. Powles Staton Funeral Home also encouraged the visiting veterans to sign up for a significant door prize — a basket full of gift cards.

The funeral home has several programs connected to veterans. “Retire Your Flag with Honor” encourages people to donate their used American flags, which are given one last service to the country when they are included in the cremation of  veterans.

The funeral home has distributed several receptacles to accept used flags in Rowan County. On display Thursday morning was its latest depository for flags — a converted U.S. mailbox, which will be placed outside at 913 W. Main St. so people can drive up and leave their used flags in the box.

Powles Staton also uses its “Operation Toy Soldier” as a way of collecting new, unwrapped toys, which are later donated to the children of active military personnel over the holidays.

The funeral home’s lounge area is decorated in a military theme, and a recent addition is the POW/MIA Table. It’s a way of remembering and honoring prisoners of war and military personnel who are missing in action.

Each element of the display — the round table, empty chair, black napkin, yellow candle, single red rose, inverted wine glass, salt and slices of lemon — is a symbol in what is described as “a place setting for one, a table for all.”

CONCORD — On Nov. 6, the day of the New York City Marathon, Lorrie Hampton of Kannapolis will hop on the... read more