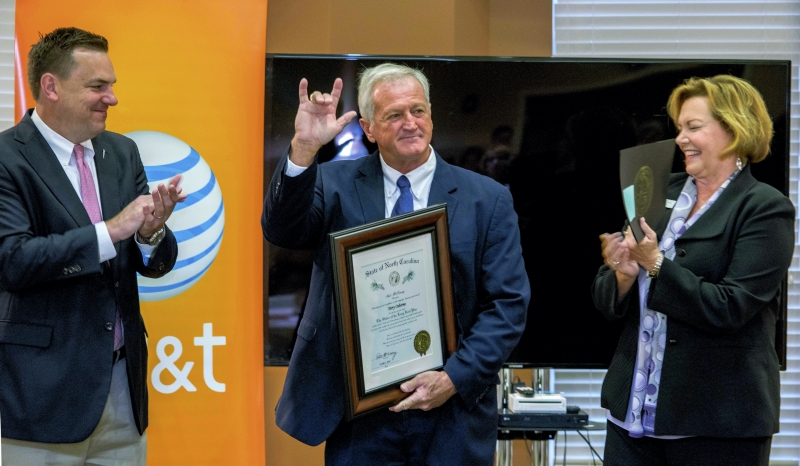 SALISBURY — Terry Osborne has a lengthy resume, and he added another item to the list on Thursday.

Osborne has been a teacher, a baseball coach, the clerk of court, a candidate for state house, chairman of the Rowan County Republican Party, director of Rowan Vocational Opportunities and general manager of the Rowan-Kannapolis Alcoholic Beverage Control. Now, he’s the recipient of the highest civilian honor that can be awarded by North Carolina’s governor.

On Thursday, Osborne received the Order of the Long Leaf Pine Award — given to those who have shown exemplary service to the state and their communities. U.S. Rep. Richard Hudson, R-8, presented the award during a Rowan County Chamber of Commerce breakfast event. He was nominated for the award by Landis native Fred Steen.

When Hudson made the announcement, Osborne — standing among a crowd of event participants — smiled slightly and shook his head as he slowly walked to accept the award.

“I was totally surprised, but it was without a doubt the greatest honor in my lifetime,” Osborne said. “To be presented the award by the congressman, Fred Steen and the governor’s office, it’s just a great honor.”

In reacting to the award’s presentation, Osborne quoted something former President Richard Nixon said in his first inaugural address.

“Until he has been part of a cause larger than himself, no man is truly whole,” Osborne said. “I’ve always tried to live that in public service. … I’m just so grateful. I really am.”

When Hudson presented the award, he went over the litany of jobs on Osborne’s resume and other positions Osborne has held. Hudson quoted pastor Billy Graham when revealing Osborne’s award to the crowd at the Chamber’s event.

“The greatest legacy one can pass on to one’s children and grandchildren is not money or other material things accumulated in one’s life, but rather a legacy of character and faith,” Hudson said. ” So today, this person doesn’t know we’re doing this, but it’s someone who embodies that concept of passing on that legacy.”

Steen wrapped up the award presentation by toasting to Osborne.

“Here’s to the land of the long leaf pine, the summer land where the sun doth shine, where the weak grow strong and the strong grow great,” Steen said, reciting the North Carolina State Toast. “Here’s to down home, the Old North State.”

Osborne currently serves as the head of the Rowan-Kannapolis Alcoholic Beverage Control system. In a letter to Osborne, Gov. Pat McCrory said Osborne’s work in his current role has become a model across the state.

“In so many ways, you and your associates in Rowan County helped us created a successful statewide program, and I’m grateful to you,” McCrory wrote.