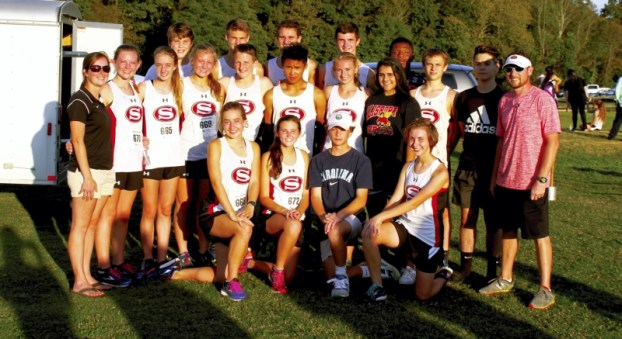 SALISBURY — Both Salisbury cross country programs won Central Carolina Conference championships on Wednesday at Salisbury Community Park.
Both programs have enjoyed past success, but they’d never won in the same year.
“For the boys, this is the fourth year in a row, but it’s exciting to have our girls winning this time, too,” boys coach Tim Pittman said. “It’s twice as nice to win together.”
It’s appropriate that the folks coaching the Salisbury squads are the husband-wife team of Tim Pittman and Sallie Hundley Pittman.

Girls
Salisbury’s girls have been strong all year, including a surprising victory in the Rowan County Championships at Dan Nicholas Park by one point over Carson.
But Sallie Pittman got concerned when the Hornets tasted defeat for the first time last Tuesday.
“We’d won all the conference meets up to that one, so it got me worried,” Pittman said. “But it turned out to be a good wakeup call.”
Salisbury’s winning score was 35. East Davidson and West Davidson both had 44s. Lexington had 136. Thomasville and North Rowan weren’t able to post a team score.
Salisbury freshman Leah Cressler won the individual race in 22:03. The other scorers for the Hornets were Ellen Simons (5th), Mary Kaufmann (6th), Julia Honeycutt (10th) and Grace Williams (13th).
“Williams had a great day, and her stepping up probably made the difference for us,” Pittman said. “All the girls ran well considering the heat and the humidity.”
Salisbury won the girls title for the first time since 2010.
The top 12 runners made all-conference, so Cressler, Simons, Kaufmann and Honeycutt are All-CCC.

Boys
Thomasville’s Chris Maxon won the individual boys race in 18:07.
Keegan Dillon, who finished second, led the Hornets. The other scorers for Salisbury were Charles Langlais (7th), Roarke Burton (11th), Trey Carlton (13th) and Brody Dillon (14th).
Salisbury posted a team score of 47 to top Lexington (60), West Davidson (71), East Davidson (94) and Thomasville (118).
North Rowan didn’t have sufficient runners for a team score, but Cavalier Michael Brandt placed fourth.
There was some drama along the way for the Hornets.
“At the two-mile mark, Trey had a nosebleed and was just pouring blood,” Tim Pittman said. “But he somehow kept moving forward.”
Brody Dillon, Keegan’s younger brother, also had an interesting day. He was part of two conference championships, leaving the cross country venue for the soccer pitch and helping the Hornets win 2-0 against West Davidson to clinch the program’s 13th straight title.
“We were lucky to have Brody today and we’re lucky Coach (Matt) Parrish works with us every year,” Pittman said. “We always have cross country runners that also play soccer.”
Salisbury hadn’t won a CCC boys title since 1999 before it broke through in 2013 and started a streak.
“We’re fortunate that we get to practice at Salisbury Community Park, Pittman said. “We’ve done a lot of training on those hills.”
Keegan Dillon, Langlais and Burton made All-CCC, along with North’s Brandt.

By Mike London mike.london@salisburypost.com SALISBURY — There are a lot of championship banners in the West Rowan gym, but the... read more