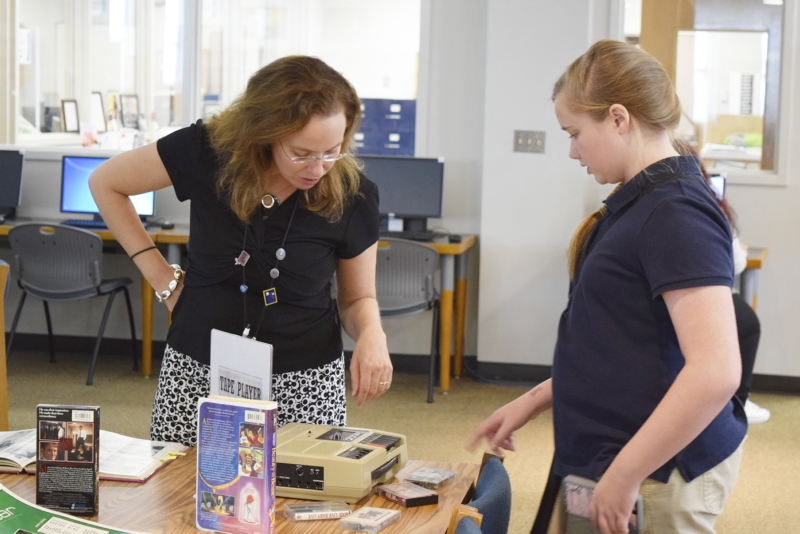 Katie Bogle, left, walks Abby Wall, right, through how to use a tape player. Many students have never seen one, Bogle said. Rebecca Rider/Salisbury Post

KANNAPOLIS — It’s lunchtime at A.L. Brown High School. In the library, students sit at café tables, eating their lunch and answering trivia questions about what life was like in 1991. A few students crowd around a table, fiddling with an old tape deck or dragging a mouse to create colored squares in MS paint on an old IBM desktop. In one corner, a group crowds around an old Nintendo, playing Super Mario Brothers.

The memorabilia is in honor of National Teen Read Week, Media Center Coordinator Katie Bogle said. It’s an annual event encouraging teens to make themselves at home in their local libraries and to read for the joy of it.

And this year’s Teen Read Week theme — “Party like it’s 1991” — is one that’s allowed Bogle and the school’s other media coordinator, Susan Monteith, to pull a few things together. For one, it’s allowed them to break out some fun items, like the old computer and Nintendo console.

But it’s also allowed them to celebrate how far the school and its media center have come. A.L. Brown’s library recently underwent a massive renovation, which reworked old space into reading nooks and a café area, and brightened walls with fresh coats of paint. But the bones of the building were built in 1991, and the week has turned into a celebration of the library’s 25th anniversary.

In addition to old technology, students can browse through the 1991 A.L. Brown yearbook or flip through newspaper clippings celebrating the library’s grand opening.

And the technology is available all week for students to tinker with.

“Some of them have seen this technology at home, and some have never seen it before,” Bogle said.

Bogle said she saw a student fiddling with the tape deck on Monday. The student knew how to operate the tape deck itself, but couldn’t get the cassette tape out of its plastic casing. Monteith said she’s heard some of the students playing Mario exclaim, “You can’t go backwards!”

Student Michael DaCost said he thought the old pixilated graphics makes the game “iconic,” and said they’re pleased by the new life the week has brought into the library.

Bogle and Monteith have a different activity planned for each day this week. Monday, the 1991 film “Hook” was playing in the library. Tuesday, Bogle led a 1991 trivia session — questions also included A.L. Brown history. On Wednesday, the library held a scavenger hunt to look for items that have remained since 1991. Bogle said that, after the renovation, there’s not much left.

The renovation project actually started during a Teen Read Week. Two years ago, the theme was “Turn Dreams into Reality.” Students were asked what their dream library would look like, and Monteith said the suggestions flooded in.

She was so impressed that she and Bogle took the suggestions to the school’s drafting class, and had students design a new media center based on student feedback. Then the students took the designs to an architect and to the superintendent. With the help of the Cannon Foundation, the dream library became a reality.

“Library usage in general since the renovation … has skyrocketed,” Monteith said.

The library has a regular lunch crowd, now — students who want to work on homework or projects during the period, or who just want someplace a bit quieter to eat. A.L. Brown allows about 40 students to eat in the library per lunch period — or roughly 160 a day — making the library a “lively place throughout the day,” Monteith said.

Edds’ Toccoa memories fall on both sides of a…