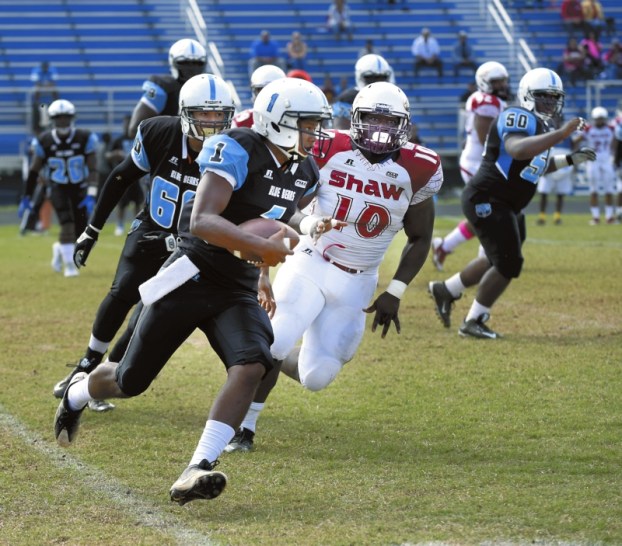 Livingstone prepares for battle with WSSU

SALISBURY — Livingstone College’s fall break couldn’t have come at a better time for the football team.

Without class on Thursday and Friday, the Blue Bears can put some extra work in to prepare for what is probably their toughest game of the season — a date with Winston-Salem State on Saturday at 1:30 p.m., at the storied, 18,000-seat Bowman Gray Stadium.

The Rams are 5-2, 4-0 in the CIAA and are on a four-game winning streak. During the streak, Winston-Salem State has beaten four conference foes by an average of 24 points per game.

Meanwhile, Livingstone snapped its four-game losing streak last Saturday at home against Shaw, 23-12, but when it comes to WSSU, history is staring the Blue Bears in the face.

Livingstone has lost 13 straight games to the Rams, by an average of 30 points per game. The only close game in the series since the Blue Bears’ last win (1998, 38-33), was last year at Alumni Memorial Stadium. Livingstone fell to the Rams, 23-21, when senior kicker Leo Manzo’s field goal attempt went wide right with 20 seconds left.

Six minutes earlier, with Livingstone leading, 21-20, WSSU kicker Will Johnson missed a 30-yard field goal but got another chance on a penalty. From 25 yards out, Johnson’s kick was true.

“WSSU is a well-coached team and I expect a hard fought game,” said Livingstone coach Daryl Williams. “Our fall break starts on Wednesday, so we’ll have a couple of full days of work without class … a little more time to prepare.

“We’re going to really stress tackling this week because they use three to four different running backs and we’ve got to make sure that we get them to the ground,” continued Williams. “They hurt us last year with yards after contact. They like to run the ball outside and throw short passes to the sidelines — that’s how they beat us last year.”

Last year, WSSU led 13-0 and 20-7 before the Blue Bears came storming back behind the passing and running of quarterback Drew Powell. The Rams had 528 yards of total offense, but the Livingstone defense made some big stops and Manzo averaged 44 yards on six punts, keeping WSSU from having short fields for its drives.

“We’ve been underdogs in almost every game since I took over the program,” said Williams, in his fourth season. “We lost to them on a missed field goal last season, so anything can happen. I feel pretty good about this week.”

In last Saturday’s win over Shaw, the Blue Bears had a nice balance of run and pass, and the defense played well against the winless Bears from Raleigh.

“The OL is playing better, but I have to keep reminding myself that three of those guys are freshmen or red-shirt freshmen,” added Williams. “It’s a credit to Coach (Josiah) Simms … they’re working hard together. They have a tough job but I like what I’m seeing from that group.

“And Longerbeam is coming along,” he continued. “He needs to work on decision-making and realize that throwing the ball away is not a bad football play — it’s better than taking a sack or throwing an interception. He’s also learning when to tuck it and run, but that kind of thing comes from getting reps.”

Longerbeam, who took over as starter in the fourth game of the season against Chowan, is completing 64 percent of his passes and has thrown for six touchdowns and only two interceptions. He has completed 50 of 78 passes for 560 yards.

Junior running back Jarius Richardson continues to be the Blue Bears’ leading rusher. Richardson is averaging 72 yards per game and has scored six TDs.

Williams also pointed out that the defensive secondary (Kovarius Williams, Demasio Williams, Gregory Hines and Danny Robinson) played much better last week against Shaw. “Winston-Salem State will test our defense, but I expect that unit to continue to give the kind of effort it had against Shaw,” said Williams.