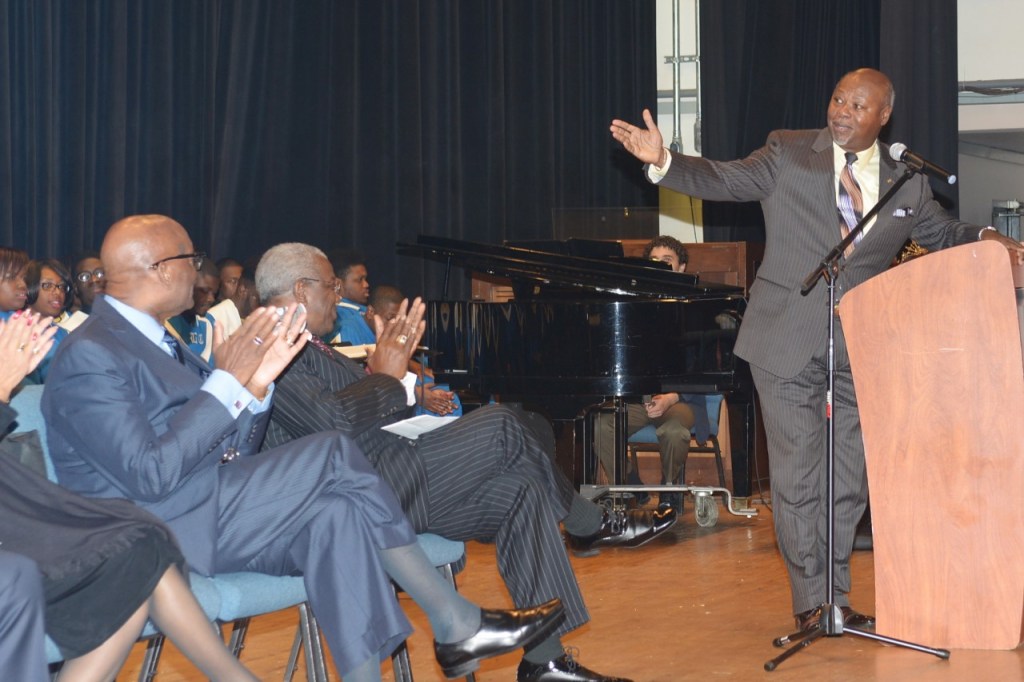 SALISBURY – The parade lasted for two hours and included nine high school marching bands, the Alumni Convocation sponsored by the Class of 1966 featured a dynamic speaker who kept the audience engaged and the patrons inside Alumni Memorial Stadium watched the Blue Bears defeat Shaw University 23-12.

In a word, Livingstone College’s 2016 Homecoming was fantastic!

“I thoroughly enjoyed Homecoming this year,” said David Strickland, a member of the class of 1981. “I attended the game and was very glad we pulled out a victory. Likewise, I was a member of the marching band when I attended Livingstone, and this year the band celebrated its 50th anniversary. But despite the win on the gridiron and all of the many and fun activities lined up for us to do last weekend, I had the most fun just sitting around talking and reconnecting with old classmates. That was priceless.”

And so it went.

As alumni converged on Livingstone College last weekend, it was the same story all around. People were happy to be back in each other’s company, spending time remembering when. In fact, Dr. James R. Gavin, III, a member of the class of 1966 and of the Livingstone College Board of Trustees, began his Alumni Convocation speech by singing Barbra Streisand’s version of the timeless classic, “The Way We Were.”

As he sang, the audience grew more and more excited, not only because of the non-conventional way in which he began the speech, but also because of his impressive voice. Gavin’s wife, Dr. Annie J. Gavin, a member of the “One of Kind Class of 1969,” beamed proudly in the audience as her husband sang.

But in the end, what struck convocation attendees most wasn’t Gavin’s singing but instead his speech, which was engaging, enlightening and, at times, no-holds barred. Gavin is used to delivering powerful speeches. He’s one of the country’s foremost authorities on diabetes, and in 1993-1994 served as President of the American Diabetes Association, becoming the first African-American to hold the post. He’s also President, CEO and Chief Medical Officer of Healing our Village, Inc., in Atlanta, a Clinical Professor of Medicine at Emory University School of Medicine in Atlanta, and he’s a past president of the Morehouse School of Medicine.

Gavin earned his medical degree from Duke University in 1975 and also has a Ph.D. in biochemistry from Emory. He and his wife are stalwart Livingstone benefactors.

“You do me a great honor by granting me the opportunity to speak to you on this magnanimous occasion,” Gavin began after singing. “We gather today with thankful hearts beneath thy maples and thy oaks. Oh, but to celebrate the way we were. It’s hard to believe 50 years have passed since we graduated.”

After detailing how 50 years aren’t really that long in cosmic time, Gavin gave the audience some fun facts, as well as some serious occurrences, from 1966.

“The Dow Jones Industrial Average closed at 785, the average cost of a new house was $14,200, the average income was $6,900, gas was 32 cents a gallon and a new car cost $2,650,” he said. “But 1966 was a tumultuous time. There were anti-war demonstrations by Berkeley students, Cassius Clay declared conscientious objector status and refused to go to the war, it was the birth of the Black Panther Party, Charles Whitman went crazy, killing 14 people and injuring 31 from a clock tower at the University of Texas at Austin, ‘Star Trek’ and ‘Batman’ debuted, Miranda rights were codified, it was the year that mini-skirts were in fashion and the Pakistan Peace Accords ended successfully.

“These and many other events surrounded us, swirling forces that would change the world we lived in, worked in and would raise our children in,” Gavin continued. “But the way we were kept our focus narrow. We did not think much of global or really even national events. We weren’t organizing protests against Vietnam, didn’t dream of traveling to Germany, Italy, Japan or even Mexico. That was 50 years ago and that was the way we were, but our world is now stronger, faster, less tolerant and even more demanding.”

Gavin told his classmates, other Livingstone alumni and friends and the students, faculty and staff assembled inside Varick Auditorium that the way the members of the Class of 1966 were didn’t equip them to deal with the daunting challenges facing the world today, particularly the United States, but the way they are does.

“This weekend we will laugh and smile as we reminisce, but we will also be reminded of how good God has been to us,’ he said to a chorus of ‘amen’s’ and applause. “We are the ones who will vote like never before. We are the ones who will say enough to the senseless wars that further divisions…This is how we are now. So many who went before us made sacrifices … and now it is our time to do all we can to ensure 50 years from now future generations of Golden Graduates will look back and say ‘thank you’ to us for making it possible for them to enjoy an education at Livingstone and the opportunity to make memories that they will celebrate.”

Gavin praised Livingstone President Dr. Jimmy R. Jenkins, Sr. for his leadership, for broadening the institution’s scope and for the numerous improvements he’s made on campus. But then he urged his fellow alumni to do more for their alma mater.

“Livingstone is not and cannot be the same as it was back during the way we were,” Gavin said. “It’s different, and its needs are different. The time is now for us to step up and show the way we were. Let’s pledge to be committed to those who follow us, to those who preceded us. Let’s show Livingstone the type of love Dr. Jenkins talks about. Can we find our best, our boldest, our most generous selves?”

After the convocation, a tree was planted on Livingstone’s front lawn, in a service led by Warren H. Arrington, Jr., vice president of the Livingstone College National Alumni Association and a member of the class of 1970. The LCNAA, under the direction of President Delores Johnson, a member of the “One of Kind Class of 1969,” conducted a raffle and donated $100 restaurant gift cards to students who remained for the entire Alumni Convocation.

After the tree-planting ceremony, Jenkins delighted those in attendance with the new and improved Blue Bear mascot, which sits majestic atop a beautiful brick foundation on the institution’s front lawn.

“People always ask ‘what is a blue bear’ ” Jenkins said. “We decided that today you will get a chance to see what a blue bear looks like.”

Previously, the bear’s color was distressed copper, but now he’s painted in tuxedo black with pearlized blue accents. After his “new look” was unveiled, it was apparent the alumni and others on hand liked what they saw. Immediately, they whipped out their cell phones to take pictures of the bear, and they patiently awaited their turn to take pictures with him.